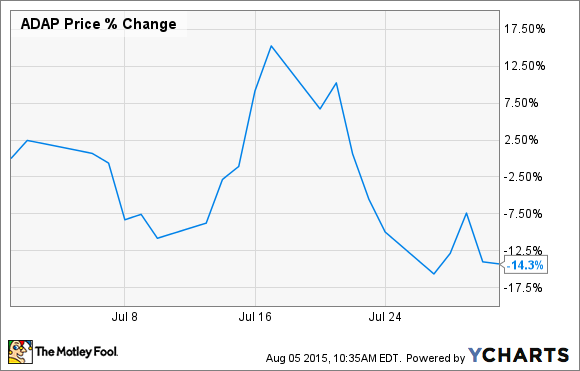 Editor's Note: This article has been corrected to remove mention of Adaptimmune's short interest, which was significantly overstated in the article. The Fool regrets the error.

What: Shares of Adaptimmune Therapeutics (NASDAQ: ADAP), a clinical-stage biopharma, fell by over 14% in July. Last May, Adaptimmune became the latest publicly-traded immuno-oncology company, hoping its genetically modified T-cells, or TCRs, based therapeutic platform would interest investors..

So what: Adaptimmune is entering an increasingly competitive space -- namely modified T-cells aimed at solid tumors and blood-based cancers. The market clearly believes that Juno Therapeutics and Kite Pharma are going to steal the show in this therapeutic area, and late-comers like Adaptimmune will be relegated to picking up the crumbs.

Now what: This small-cap biopharma's lead product candidate is an affinity-enhanced TCR therapeutic that targets the NY-ESO cancer antigen. The interesting part is that it has demonstrated a treatment effect in early stage studies for both solid tumors and blood-based malignancies -- unlike some of its contemporaries in the enhanced T-cell space. GlaxoSmithKline has also thrown its weight behind Adaptimmune, licensing its flagship clinical candidate in 2014 in an effort to develop it as a game-changing treatment for a wide range of cancers.

Nevertheless, this stock, as a small-cap biotech, is definitely not for the faint of heart.

All told, Adaptimmune is worth a deeper look by risk-tolerant investors looking perhaps for a contrarian buy, especially in light of the impressive initial results for its therapeutic platform. But the stock's monstrous short interest also shouldn't be taken lightly. With such a high short interest, it may struggle to push higher, even in the wake of positive clinical developments.

George Budwell has no position in any stocks mentioned. The Motley Fool recommends Juno Therapeutics. We Fools may not all hold the same opinions, but we all believe that considering a diverse range of insights makes us better investors. The Motley Fool has a disclosure policy.