A jump in sales for the refreshed 2016 Ford Explorer helped second-quarter profits beat expectations. Ford's profits in the second half of 2015 could get a bigger boost as F-150 sales ramp up. Source: Ford Motor Company

Normally, we'd say that was a fine incremental increase. But that obscures the real story. Ford told us to expect a jump in profit starting in the third quarter, after a subdued first half -- but second-quarter profits were up big. Is Ford's "breakthrough" profit boom shaping up to be even bigger than expected?

A surprise "outstanding" quarter -- with more to come?
"The headline is that we had an outstanding second quarter."

"If you look at some of the highlights, we had the best automotive quarterly profit since 2000; the best quarter ever in North America; a second quarter record in Asia Pacific; strong continued results at Ford Credit; we roughly broke even in Europe; and we're on track to deliver a breakthrough year that we talked about at the beginning of the year."

Back in January, Fields and CFO Bob Shanks said repeatedly that 2015 would be a "breakthrough" year for Ford in terms of pre-tax profit. Both reiterated that again during the second-quarter call.

But, they warned at the beginning of the year, the pattern of Ford's quarterly earnings would be different from the usual in 2015. Ford has used this slide to show how the "calendarization" of its quarterly earnings would differ from its typical pattern in 2015. Source: Ford Motor Company

In 2015, they warned, things would be different. The massive, ongoing launch of the all-new F-150 would limit truck sales and boost expenses until both of Ford's truck factories were ramped up, while the added expenses (and associated dealer shortages) of launching the all-new Edge and refreshed Explorer would also crimp earnings in the first half. But sales and profits would jump in the second half once Ford's dealers had full inventories of the new products, they said.

Is Ford ahead of schedule, or beating its own expectations?
So far, things have turned out mostly as Fields and Shanks led us to expect. Ford's first-quarter pre-tax profit of $1.38 billion was up $24 million from the first quarter of 2014, but it was a big drop from the $2.15 billion Ford earned in the first quarter of 2013, a more typical year for the Blue Oval.

But I say "mostly" because Ford's second quarter result was well ahead of what most analysts (including your humble Fool) expected. Strong pricing on the new F-150 and big initial sales of the new Edge and Explorer gave Ford's North America unit a boost, while an uptick in sales in Europe helped offset a slowdown in China.

Here's what Ford's pre-tax profits looked like in 2013, a fairly typical year, and so far in 2015. If you compare it with Ford's "calendarization" slide above, you'll see that 2013's pattern follows the "historical" example from Ford pretty closely. But 2015 looks to be ramping up a little earlier than expected. 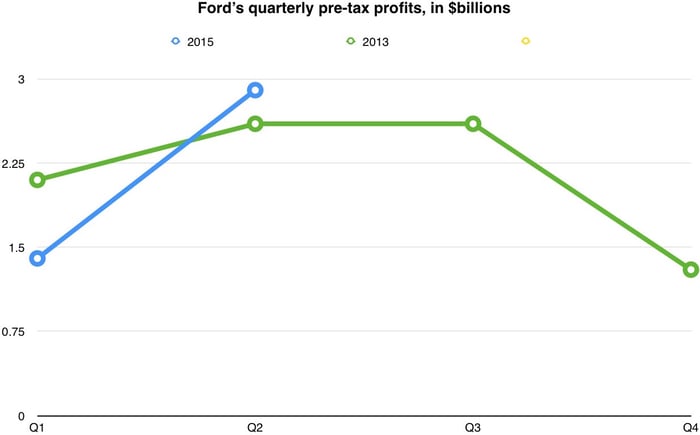 Since last fall, Ford has been guiding to a pre-tax profit between $8.5 billion-$9.5 billion for the full year in 2015. While the outlook for North America is particularly strong now that the new F-150 is hitting its sales stride, and Europe looks to be improving after several weak years, Shanks has noted that events in Russia, China, or Latin America could end up trimming Ford's bottom line a bit in the second half.

But given the way things shaped up in the second quarter, a full-year result at the high end of Ford's guidance -- or maybe even beyond -- wouldn't be a big surprise. But it would make 2015 one of the most profitable years in Ford's long history.