Wall Street is a place where confident and brilliant financial minds often get things wrong -- particularly within the banking sector.

Yes, the financial crisis and subprime real estate market crash are obvious and historic examples of this, but smaller examples exist all around us. Today, for example, I think Wall Street is getting it wrong on one of the largest and most well-known banks in the world.

Everyone's favorite loser: Bank of America
According to recent analyst survey data published by Yahoo! Finance, of 31 analysts polled, six recommend Bank of America (NYSE:BAC) as a strong buy, 12 as a buy, 11 as a hold, and just one each as either underperform or sell.

That's all well and good, but it's skewed by a classic Wall Street mistake: short-term thinking. Looking back at Bank of America's history, a pattern of boom and bust emerges, driven not by external factors, but by a management culture that fails to anticipate and mitigate the cyclical nature of the credit cycle.

For example, there was the real estate crash in Southern California in the early 1990s, a localized economic event exacerbated by the global recession happening at the same time. It was neither the first nor the last time that rival Wells Fargo would prove the better of the two banks: 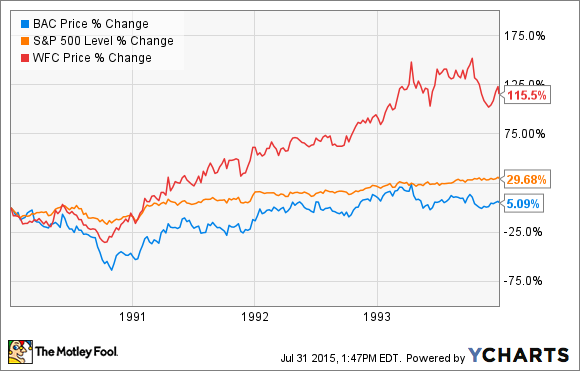 Fast-forward to the five years surrounding the next major U.S. recession, which struck in 2001, and the story is largely the same: 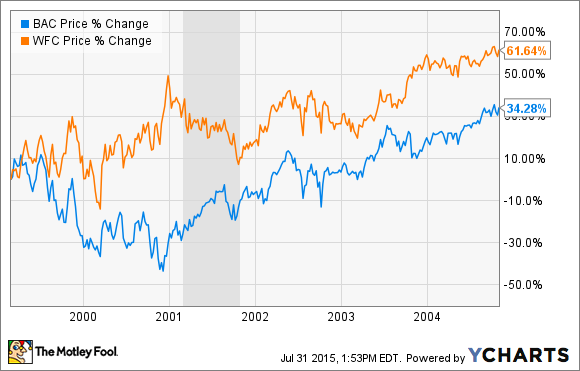 And, of course, we all know how poorly Bank of America fared in the financial crisis and great recession.

The Street is beginning to look favorably on Bank of America once again
Despite the lessons from history, Wall Street today seems to be proceeding with a forgive and forget approach to B of A.

Investors put the bank in the valuation dog house after the financial crisis, and justifiably so. However, that sentiment seems to be fading.

Since bottoming with a price equal to only 25% of book value in 2009 and again in 2012, the bank has steadily increased its price-to-book-value ratio to just above 80% today. Riding the euphoria of the bank's strong second-quarter results, the market is pushing that ratio closer and closer to its five-year high. The trend is clearly from the lower left to the upper right. 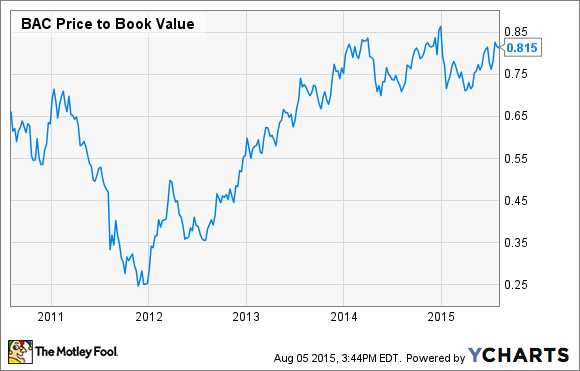 In its latest quarter, Bank of America posted a return on average assets of 0.99%, return on average common equity of 8.75%, and more than doubled its earnings per share on a year-over-year basis. It was an unabashed success, even if these numbers are barely in line with industry averages for large lenders.

It seems likely that the bank will continue to improve its quarterly financial results, and its valuation will continue to climb just as it has over the past three years. Wall Street agrees, and that's why analysts are as bullish on the stock as they are.

That opinion is all well and good if you're thinking in terms of one quarter to the next. But if you're thinking long term -- over five, ten, or even 15 years -- this analysis falls short on one important respect: what happens when the economy hits another speed bump?

Something you won't find on a financial statement
Some banks have repeatedly done well through crises and recessions over time. Wells Fargo stands out. JPMorgan Chase has also proved its mettle, particularly during the past decade. These banks not only survived each slow down or crisis, but came out on the other side thriving. They continue to put up strong financial results today, at the same time that Bank of America is only just regaining its toehold.

So how did these banks succeed and even thrive in times of turmoil while Bank of America struggled? They have comparable business models, they're comparable in size, and they compete in the same markets. What's the fundamental difference?

The answer can't be found anywhere on a financial statement, because the answer lies in its management and risk culture. These are qualitative factors, and they can't simply be changed with the flip of a switch.

So what has changed in Bank of America today that will make its performance in future recessions any different from previous ones?

I believe nothing has.

Aside from empty platitudes, we have no reason to think its risk management has improved. We have no reason to believe that it can generate higher returns on a sustainable basis. And we have every reason to believe that the bank industry, post Dodd-Frank, will be weighed down by higher regulatory costs at the same time that many of the industry's pre-crisis revenue streams have been curtailed.

In short, I hope the bank succeeds, but until it proves it can thrive during the good times and the bad, I'm proceeding with caution.