What's happening: Shares of offshore drilling specialist Atwood Oceanics (NYSE:ATW) are down about 9% as of this writing, and were off more than 10% earlier in the trading day. This is more of the same for investors over the past year. Since Late June 2014 -- when oil prices began falling from the peak above $100 per barrel -- Atwood Oceanic's stock has sunk 65%: 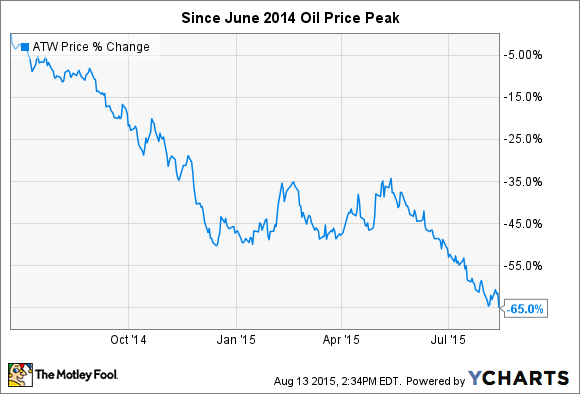 Why it's happening: Today's big drop was precipitated by a downgrade by a Barclays analyst from "equal weight" to "underweight," and a lowering of his target price for the stock to $18, from $27. This coincided with news that Hercules Offshore filed its "prepackaged" Chapter 11 bankruptcy filing today. This has been expected, as Hercules has been working with creditors in advance of the filing to put a reorganization plan together, but the "official" filing is weighing on the sector today.

The Barclays analyst note that included the downgrade on Atwood was generally negative on the outlook for the offshore sector looking forward, and frankly, it's hard to disagree with the sentiment. By most expectations, the falloff in demand for drilling is expected to carry over through 2016, due to both less demand for new oil production and the still-oversupplied floater market. The reality is, until more older drilling vessels start to get retired, the glut of supply is going to weigh on the industry, affecting day-rate prices, and making it difficult for many fleets to keep all their ships under contract and working.

Atwood is exposed to this, with nine of its 11 ships in the water and working scheduled to come off contract between now and the third quarter of 2016. Of those, three will be off contract before the end of 2015. Unless the company is able to secure work for those vessels, it could be forced to idle them, which will help reduce costs but won't eliminate them.

Don't get me wrong: This downgrade doesn't spell doom and gloom for Atwood Oceanics, but it's a solid reminder that rough seas remain for the entire offshore drilling sector, and it's unclear when the waters will calm down.