Union Pacific's (NYSE:UNP) performance in the recently reported second quarter wasn't very impressive. Both the top and bottom lines decreased on weak volume, mostly because of falling coal demand. But the United States' largest railroad company shouldn't be judged only on the basis of quarterly performances.

It's important to know how strong its fundamentals are. One way to do that is by analyzing the railroad behemoth's income statement over the past five years, which will tell us how it's generating revenue, what its operational expenses are, and what's finally left for shareholders.

Union Pacific's operating revenue has been increasing at an average of 9% since 2010. Almost all of the company's revenue comes from freight income that depends on shipment traffic. In fiscal 2014, out of Union Pacific's $24 billion total revenue (a 9% increase over the year-ago period), $22.6 billion came from freight. 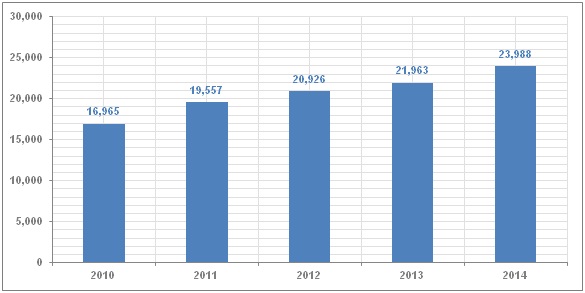 Union Pacific's shipment diversity and broad network coverage are great advantages. In 2012 and 2013, coal shipments had decreased as domestic demand crashed because of a combination of three factors: low natural-gas prices, an EPA regulation that imposed restrictions on carbon dioxide emissions from power plants running on coal, and warm 2012 winter that drastically reduced electricity consumption in the United States. However, volume strength in automotive, chemical, and domestic intermodal freight compensated for the decline in coal. 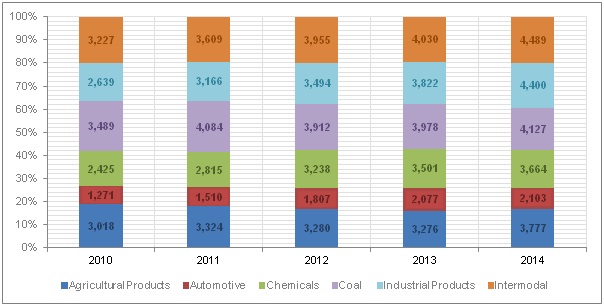 For 2015, analysts are predicting a 5.7% drop in revenue to $22.6 billion, and the company has acknowledged that volumes could fall compared to last year. Coal and crude will continue to adversely affect revenue, while ag products, automotive, plastic, and LPG offset the loss.

Operating efficiency is quite impressive
Union Pacific maintains a strict control over costs. The company's operating ratio (operating expense as a proportion of sales) has improved remarkably over the past decade. In 2014, its operating ratio was 63.5%, down compared to 89.4% in 2004. Improved productivity, higher volumes, and pricing power have strengthened Union Pacific's operations.

The Nebraska-based railroad company expects these factors to continue to have a favorable impact and further lower its operating ratio to 60% by 2019. 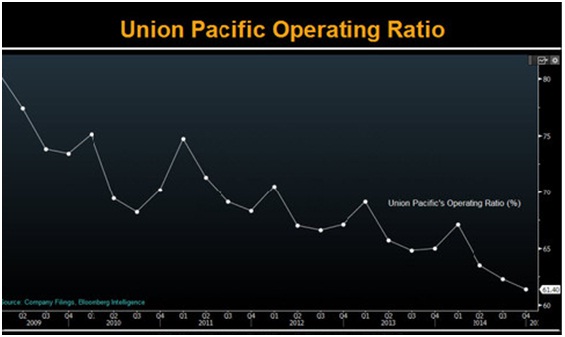 Union Pacific had registered an all-time-low quarterly operating ratio of 62.3% in the third quarter of 2014. Higher business volumes, the company's focus on improving service, and a 5% drop in diesel prices were the key factors behind the operational achievement.

The company is constantly improving its fuel efficiency -- from 375 miles per gallon of diesel in 2000 to around 500 mpg for moving a ton of freight currently. This has come through years of investments, around $6.75 billion total, in locomotives.

Besides, Union Pacific is also right-sizing its resources in proportion with the current volume decline. It has stored 900 locomotives and furloughed 1,200 employees to keep costs at bay. 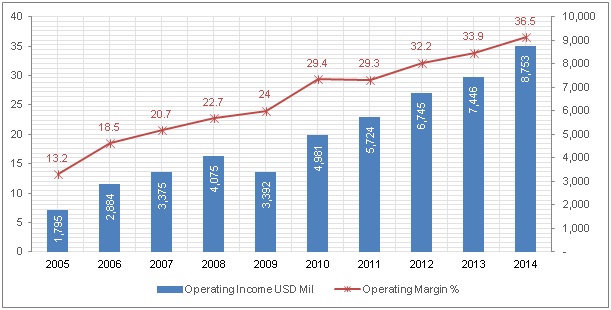 Besides improving operational performance, core pricing gains have been an important factor driving Union Pacific's margin growth. The company recorded core pricing gains of over 4.5% between 2007 and 2012, and in 2013 and 2014, it saw price gains of 3.6% and 2.5%, respectively.

These annual price increases help railroads to cover cost inflation and support margins. In the second quarter, core pricing gains went up 4%, and Union Pacific expects improvement for the fiscal year as well.

Also, the company earns fuel surcharge revenue, which has gone up from $0.6 billion in 2009 to $2.8 billion in 2014. This revenue helps transportation companies to moderate the effect of fuel-price increases, as fuel forms a significant portion of operating expense. Although in recent times, falling oil prices have hit surcharge revenue, prices are not likely to remain at these levels for long.

Binding it all together
Union Pacific's healthy operations, with steady revenue and profit increases and cost efficiency gains, indicate the company's fundamental strength. True, the railroads are going through a bit of a rough patch because of decreasing coal demand and a mix of other factors, but their long-term prospects are bright. Even Warren Buffett swears by the industry.

Union Pacific is a dominant industry player with amazing network reach, and it stands to gain from the available growth prospects.