It's axiomatic: If you want to achieve investment results that are different from the average (i.e., different from the passive returns available from index returns), you have to do something different. Easier said than done. Going against the herd is uncomfortable; it takes courage (or confidence, at least). We are social animals, and it does not come naturally to us to isolate ourselves from the group. Still, overcoming our herd instinct is the price to pay for superior performance.

Today, there are number of ways for investors to be contrarians. Results from the B of A Merrill Lynch Fund Manager Survey for August show the lowest allocations to emerging markets since April 2001, and to the Energy sector since February 2002. The global survey covers 162 fund managers managing $449 billion in aggregate.

That observation does not imply that emerging market and energy stocks are necessarily good value at this time. However, when sentiment regarding a security, sector, or asset class is unanimously -- or at least overwhelmingly -- negative, it's usually a good place for value-driven investors to start their due diligence.

One way to verify ex-post if an asset was indeed a good value is to see what sort of returns a buyer of the asset would have earned over a sufficiently long time frame.

So: How have emerging market equities performed since the last time they were this reviled (as identified by the B of A Merrill Lynch survey)? The following table summarizes the price and total return performance of the MSCI Emerging Markets (EM) Index and the S&P 500 Index, from the end of April 2001 through yesterday's market close:

Source: Author's calculations based on data from MSCI and Bloomberg. *From April 30 through Aug. 17, 2015.

The MSCI EM Index smashed the S&P 500 over this period and turned in a very respectable annualized total return of nearly 10%. Furthermore, the EM Index's outperformance was achieved despite massive underperformance over the past five years.

The following graph displays the performance of the iShares MSCI Emerging Markets ETF (NYSEMKT:EEM) versus that of the Vanguard S&P 500 ETF (NYSEMKT:VOO) over the past five years: 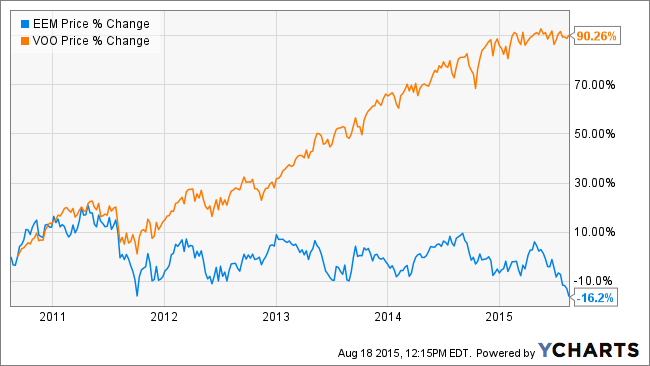 Nevertheless, today's market conditions aren't identical to those in April 2001. As the Financial Times' respected Lex column noted in this morning's paper:

The MSCI EM Index prospective price/earnings ratio, at 12 times, trails the [MSCI] World Index at 17 times. That is a wide discount by the standards of the past five years. But compare that 30 percent discount to the early part of the last decade when asset allocators truly hated the emerging world. Between 2001 and 2004, following the Asian and Latin American currency crises, emerging markets traded at half the multiple of developed ones. There is room for the discount to widen from here.

In this situation, however, I think saying, "the discount can widen from here" is comparable to saying that a stock that has been knocked down below its fair value can see its price continue to decline. Even if that occurs, it does not make the earlier price a bad value -- I've yet to come across an investor who is able to time a market bottom with any regularity.

If you're really courageous, you could look at emerging market energy companies. With Brazil's Petrobras SA, you even get the taint of a massive bribery scandal thrown in. At 8.1 times this year's earnings estimate -- half the median multiple for its peer group, according to data from Bloomberg -- the shares look enticing, but it's the sort of situation even a hardened contrarian would think twice about investing in.