For investors in Keryx Biopharmaceuticals (NASDAQ: KERX), a small-cap biotech with a focus on renal disease, 2015 hasn't been a good year, as its stock has plunged more than 50% since the start of the year. Despite being a company that holds plenty of reasons for optimism, the share price has done nothing but head south this year, frustrating long-term bulls.

But is the pain destined to continue? Here are four reasons why investors in Keryx should consider getting out of the stock today. 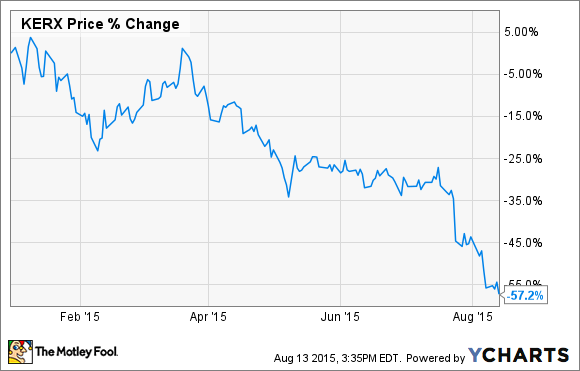 1. Disappointing initial Auryxia sales
Keryx is a one-drug company; therefore, as goes sales of that one drug goes Keryx's stock. Keryx's future is in the hands of Auryxia, an oral medication that helps patients with chronic kidney disease who require dialysis to keep their metabolic readings in check.

While peak sales estimates for the drug are currently running around $1 billion in the U.S. alone, stateside sales for the drug during the second quarter were only $1.8 million -- which is not exactly the fast start that analysts were hoping for. Management believes that the slow start is being caused by patient access challenges and general conservatism among prescribers. The company is working to resolve both issues, but the initial sales data certainly has investors worried that the drug may not be able to live up to its potential.

2. Management turnover
Small biotech companies are risky enough in their own right, so investors like to see a stable management team in place to drive a company's performance. In the past year, Keryx has experienced turnover in its top two seats, and now boasts a new CEO and CFO.

While bringing in new leadership can make sense as the company makes the transition from a clinical-stage company to a commercial one, it can also be a signal that there is trouble brewing in the boardroom. While the new faces appear to bring a wealth of experience to their new roles, it certainly indicates there is a reason to be cautious.

3. Analysts sour on the shares
Auryxia's slow start has caused a flurry of analyst activity since the start of the year, and none of it has been good. Price targets for the company's shares continue to be slashed, which has caused a lot of investors to give up on the stock.

Roth Capital has long been bullish on the company's prospects, and had a price target of $32 at the start of the year; but that's slowly been whittled down during the year and currently stands at $6. More recently, Morgan Stanley initiated coverage on Keryx, and set their price target for the stock at $3. It's certainly hard to get your share price moving in the right direction when the analysts covering your company start to turn negative.

4. Bears on parade
As analyst enthusiasm for Keryx has waned, short-sellers have been piling into the stock, putting some serious downward pressure on the share price. 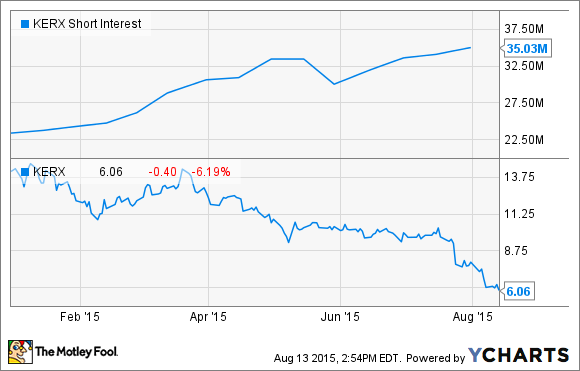 Those 35 million shares that are sold short represent a huge 42% of the shares that are available for trading. Having a high short ratio is not necessarily a reason to sell, but it does tend to significantly amplify share-price movements, both good and bad. For long-term investors, that just means that you need to have a stronger-than-usual stomach to hold the stock.

The Foolish bottom line
Keryx's investors are currently in "show me" mode, and their patience for the promised revenue growth from Auryxia appears to be wearing thin. As Keryx is a biotech that's still losing money, it remains a high-risk stock; so it shouldn't come as much of a surprise that traders dump the stock first, and ask questions later.

Personally, I think the potential for Auryxia appears to be huge. If this management team can execute in making the drug a success, Keryx could be a multi-bagger from here. If it's not, then Keryx's stock could certainly fall further from here. Bulls and bears alike should be bracing themselves for a bumpy ride.