There are an awful lot of things working against Companhia de Saneamento Basico (NYSE:SBS) -- Sabsep -- right now, especially if you are an American investor in the Brazilian water and sewage treatment provider. The combination of drought, regulated returns, and devaluation of the Brazilian real have all affected the way investors view this stock as shares have declined more than 50% since this time last year. 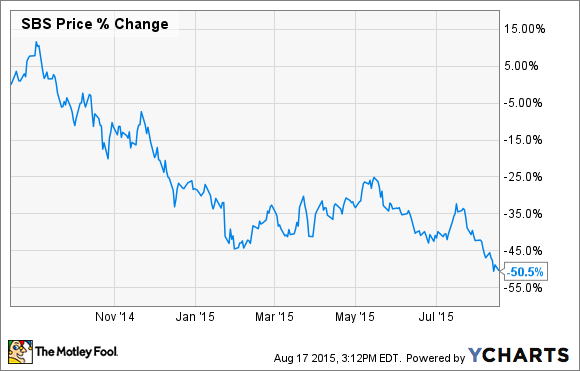 Against this backdrop, it would not be surprising to see Sabep's earnings results suffer. However, the company was actually able to see some unexpected gains. Let's take a quick look at the numbers for Sabep's most recent quarterly result, how it was able to beat expectations, and why American investors won't see much from those results.

By the numbers
The drought that has stricken the Sao Paolo region has not let up in recent months, and it is taking a serious toll on the region as well as on usage rates by Sabep's customer base. Compared to this quarter last year, total water production has declined 14.5% due in large part to some serious water-usage constraints across the company's service base. In fact, these declines can have a double impact on the company's results as its Water Consumption Reduction Incentive Program gives discounted rates to customers who can reduce usage.

Despite these huge headwinds to revenue, Sabep was actually able to increase net operating revenue to 2.82 billion Brazilian reals, a 2.5% increase from last year. It was able to achieve this thanks to three items:

Some of that was an extraordinary tariff increase -- about 6.9% -- that was a result of the current water shortage, so investors shouldn't expect that much of an increase when water sources hopefully return to normal.

What was even more encouraging than the company's ability to maintain revenue was the fact that it cut costs across the system enough to post better than expected earnings as well. This quarter's EPS of 0.49 reals per share came in well above Wall Street's consensus earnings estimate of 0.30 per share. The largest improvements for Sabep's earnings came because the company was able to decrease its operational costs in the water and sewer segments by decreasing its system losses -- think pipeline leaks -- by more than 2 percentage points as well as reduce total headcount by 4.4%.

All for naught?
As much as the preservation of revenue and the reduced costs may be encouraging when looking at Sabep's business, the sad reality is that it may take some time before investors that own American depository shares see the benefits from these initiatives. The reason for this is the Brazilian real continues to lose value to the U.S. dollar. Since this time last year, the dollar's value has increased more than 55% compared to the Brazilian real.

The reason this is important to know about owning shares of Sabep is because the dividend it pays to shareholders is denominated in reals, so any dividend paid out will be affected by foreign exchange rates. So, the value of that dividend will be much lower for American depository shares. This may not be a huge issue right now since the company pays an annual dividend in April and a lot of things can happen between now and then. However, the double effect of the company paying a varying rate dividend -- based on a percentage of net income -- and continued devaluation of the Brazilian real could mean that the dividend payment for American shareholders is not what the company's business results suggest it should be.

Investor takeaway
There are a lot of things working against Sabep, and the added foreign exchange risks makes it even less lucrative for ADS holders of this stock. However, the company itself is actually performing rather commendably in the face of these external challenges. If it can continue to produce results in today's conditions, it actually gives some encouragement for when the drought is alleviated and foreign exchange rates swing back in the other direction. When those things happen, though, is anybody's guess.