MGM Resorts (NYSE:MGM) has been a surprising top performer in gaming this year as the industry works through some of the roughest conditions we've seen since the financial crisis. Ironically, what's caused the stock's underperformance in the past five years -- little exposure to Macau -- has been the company's savior this year. And the factors working in MGM's favor don't seem to be subsiding anytime soon. 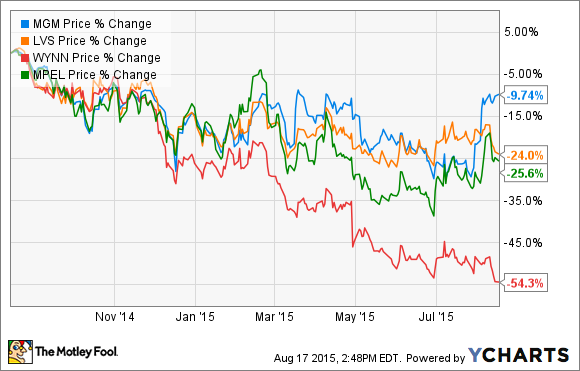 Las Vegas is suddenly hot again
As Macau's gaming revenue has declined in 2015, it's made Las Vegas appear to be a relative safe haven for operators. Gaming itself has struggled a little, primarily because of low Asian baccarat play, but non-gaming revenue has been strong.

At MGM Resorts, room, food and beverage, and retail revenue were all up in the second quarter as people continued to travel to Las Vegas to party. That's the company's stable foundation and its largest source of revenue, but it's not where the upside exists for investors.

MGM China is where there's an opportunity for growth
The MGM Macau resort may be in its eighth year of operations, but it's still a middling casino as far as Macau goes. Macau has seen most of its gaming revenue move to the Cotai region, where a critical mass of resorts is now a major draw to mass-market players and VIPs alike. Stuck on the Macau Peninsula, MGM Macau is profitable but it has little upside.

This is essentially pure upside for MGM because it's in a new part of Macau for the company and will most likely take revenue from competitors rather than cannibalize its own resort.

The price is right for MGM Resorts
Despite the strong performance for MGM Resorts versus competitors, the stock is still a decent value given its stability and upside potential. The company's enterprise value/EBITDA ratio is 10.4 on a trailing basis compared to 10.3 for Las Vegas Sands and 11.0 for Wynn Resorts, which both will be hit by declining revenue in the coming months.

I think this is a recipe for MGM Resorts to continue outperforming its competitors at least until Macau's revenue begins to grow again. The good thing for MGM investors is that even if Macau starts a growth spurt, the company will have exposure with MGM Macau and MGM Cotai.

After a rough year on the market, gaming investors may be looking for just this low downside risk and high upside potential.