Please ensure Javascript is enabled for purposes of website accessibility
Log In Help Join The Motley Fool
Free Article Join Over 1 Million Premium Members And Get More In-Depth Stock Guidance and Research
By Brian Feroldi - Aug 19, 2015 at 8:16AM

Alexion Pharmaceuticals has been a biotech investor's dream stock for years and has created a fortune for patient investors. But with a strong product lineup and healthy pipeline, the future looks great, too.

I can't tell you how many times I've uttered those words to myself after I look at the long-term chart of a winning stock. When a stock has been a rocket ship over the past one, five, or 10 years, it can be mentally difficult to finally press the "buy" button when the stock could have been purchased only a short time earlier for a much smaller price.

Consider Alexion Pharmaceuticals (ALXN), a biopharmaceutical company that focuses on creating products for extremely rare diseases. Its stock has been a monster winner for a long time and has absolutely smashed the returns of the S&P 500 over the past 10 years. 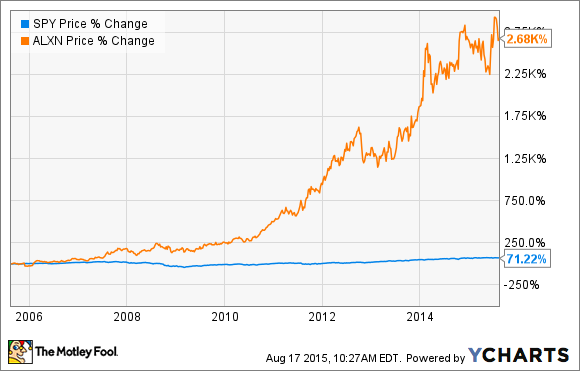 While it may be tempting to simply look at its returns and conclude that the run is over, I think there are plenty of reasons to believe that Alexion stock is poised to outperform from here.

Ultra-rare treatments create ultra-rare profits
Alexion's huge market returns have been come from its blockbuster medication Soliris, an extremely expensive drug that treats two ultra-rare, life-threatening blood disorders: paroxysmal nocturnal hemoglobinuria and atypical hemolytic uremic syndrome, or PNH and aHUS. Each of these diseases afflicts only a few thousand patients around the world.

Despite its limited addressable patient population, sales of Soliris have been huge and are have been growing at a rapid clip for years. This past quarter, sales eclipsed $636 million worldwide, which was up a strong 24% when compared with the previous year and would have been even higher if not for the craziness in the currency markets.

The near- and long-term future continues to look bright for Soliris, as the company believes that the majority of patients with PNH around the world have yet to be even properly diagnosed with their condition, let alone treated. In addition, the company believes that treating aHUS appears to be a larger market opportunity than PNH, which indicates we should expect continued growth for Soliris in both indications.

When you combine these bullish facts with the four other indications that Soliris is currently in advanced or early clinical trials for treating, chances look quite good that Soliris will remain in fast growth mode for years to come.

Adding a new franchise to the mix
Alexion has also been making great progress in its efforts to diversify its future revenue stream beyond Soliris, and it should have two new drugs hitting the market before the end of the year.

The first drug was developed in-house and is called Asfotase alfa, which is Alexion's potential treatment for hypophosphatasia, an ultra-rare genetic disease that causes bone minerals to become defective and can cause bone deformity, lead to respiratory failure, and even result in death. Asfotase alfa, which is already approved in Japan and will sell under the brand name Strensiq, replaces the lost enzymes and can address the underlying cause of the disease.

The odds of regulatory success for Strensiq look quite good. In addition to the Japanese green light, the European Union has given a positive opinion on its approval. Stateside, the FDA has given the drug priority review and granted it with a breakthrough therapy designation.

Alexion's second drug that should be launching this year comes from its recently-completed $8.4 billion acquisition of Synageva, which brought the drug Kanuma into its lineup. Kanuma is a potential treatment of lysosomal acid lipase deficiency, a genetic disease in which lipids accumulate in the organs and can lead to a huge range of serious medical issues.

Kanuma replaces the missing enzyme needed to treat this condition, and regulators are certainly impressed with what they've seen thus far. The FDA has granted Kanuma a breakthrough therapy designation and is fast-tracking its review. The European authorities have also granted the company's request to accelerate an approval decision, and the company has already submitted the drug for approval in Japan as well.

Analysts appear to be quite bullish on the revenue potential for both of these drugs, as peak sales for Strensiq are currently estimated to top $1 billion annually, and Kanuma appears to be looking at a $700 million annual opportunity. Both drugs seem to be well positioned to contribute to top-line growth in the years ahead.

Is the price ahead of itself?
The market is well aware of Alexion's terrific growth potential and has bid up its shares accordingly. The stock currently trades at pricey 64 times trailing earnings, which is in nosebleed territory for most investors.

This number also looks even more outrageous when you consider that the company recently lowered its guidance for the year as a result of digesting the Synageva acquisition. The company now expects to earn $4.70 to $4.80 per share for 2015, which is down substantially from the $5.60 to $5.80 it was guiding for before the announcement.

While that may sound troubling, I think there are plenty of reasons for optimism. Alexion is currently facing a series of acquisition-related charges and a step up in expenses related to the rollout of Strensiq and Kanuma that are putting a short-term damper on its profits. However, I think this is money well spent, as I like the revenue diversification that this acquisition brings, and Alexion's expertise in rolling our ultra-rare drugs should greatly increase the chances for success. Alexion also expects to wring out $150 million in cost savings from the merger by 2017, which should make this deal accretive to profits by 2018.

I don't even think we have to wait that long for the price to start to make sense, either, as the stock currently trades around 32 times its 2016 earnings estimates. Given Alexion's history of outperforming analyst expectations and a $1 billion share-repurchase authorization, I like the stock's odds of outperforming from here.

Biotech companies such as Alexion that focus on rare diseases have become in vogue, which can make investors feel as if they've missed the opportunity to profit. However, despite the huge run, I think Alexion's pipeline and financial strength make it a great stock to nibble at today and could make it a great company to buy heavily if the market were to crash.