Soros Fund Management is one of the most closely-watched investing firms on Wall Street because its namesake and chairman, George Soros, has a proven track record of not only beating the major indices, but essentially crushing them for most of his lengthy career. Unlike many of his peers who rely heavily on fundamental analysis, Soros' investing philosophy focuses on identifying the start, or end, of major trends in the market that can be exploited for hefty gains.

So when his fund was one of the first major firms to start pouring money into the experimental cancer-fighting technology known as chimeric antigen receptor (CAR) T-cell therapy, investors more or less viewed this bold move as par for the course.

Nevertheless, the fund's purchase of shares of early-stage and pre-clinical companies such as Bellicum Pharmaceuticals (BLCM 1.56%), Kite Pharma (NASDAQ: KITE), and Juno Therapeutics (JUNO) over the past few quarters was indeed a daring move, because this technology has a documented history of producing extremely serious adverse events, even leading to a handful of deaths in clinical studies.

According to the recently filed 13-Fs, though, we learned that the Soros fund had a change of heart in the second quarter, selling off its entire holdings in these three leading CAR-T names. Given the fund's laser-like focus on major trends and these outstanding safety issues, let's consider if now is indeed the time to move to the sidelines with this promising cancer-fighting technology.

What's the downside risk with CAR-Ts?
On the safety side of things, patients with a high tumor burden are believed to be at risk for a deadly side effect known as cytokine-release syndrome, in which their immune systems essentially go into overdrive upon receiving the genetically modified T-cell therapy.. This issue appears to be particularly problematic in adults, with children reportedly being relatively resistant to severe bouts of cytokine-release syndrome.

Another worrisome aspect of this technology is that some early-stage studies have reported a complete lack of effectiveness in solid tumors, despite some stunning results across a host of blood-based cancers, especially in younger patients. Therefore, the concern going forward is that CAR-Ts may end up mainly as a niche treatment for pediatric blood disorders, playing perhaps a limited role in the treatment of adult hematological malignancies.

All told, this emerging clinical profile has no doubt been part of the recent slump among this group of stocks, as the following chart shows: 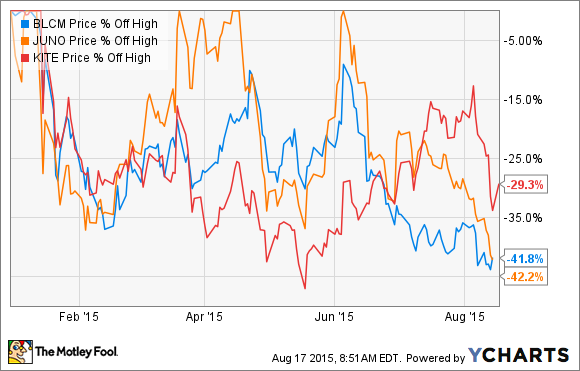 And this somewhat dinged-up clinical profile might be why the Soros fund dumped its CAR-T holdings altogether in the second quarter.

Should investors follow suit in light of these risk factors?
CAR-T stocks are certainly chock-full of risk. After all, there's no way of telling how these early-stage assets are going to pan out in larger trials, or if the safety issues will become more pronounced as sample sizes increase.

That said, there are several reasons to consider holding these speculative oncology stocks, or buying them after their recent slide. First off, Bellicum's next-generation CAR-T platform that incorporates molecular switches to regulate therapeutic responses is only now heading into human clinical trials. This approach has the potential to change the CAR-T game in a big way and, most importantly, avoid major adverse events by dampening the immune response in vivo.

Next, Kite's lead clinical candidate, KTE-C19, and Juno's CD19 have both been generating unprecedented results in small, early-stage trials for hard-to-treat forms of blood cancers. As a result, Amgen and Celgene have signed major research partnerships with these two clinical-stage companies, respectively, showing that big biotech is carefully eyeing this emerging technology.

And last but certainly not least, the blood-cancer market was already valued at a whopping $24 billion in 2015 and is expected to continue growing as more therapies gain approval for conditions with limited treatment options. So even if CAR-Ts prove ineffective in solid tumors, they could still be important players in the huge hematology market moving forward. That's why risk-tolerant investors may not want to follow in the Soros fund's giant footsteps and perhaps consider keeping one or more of these stocks in your portfolio for the long haul.

What's Juno Therapeutics Worth to Celgene?
413%