Ahem. I'll do my Netflix (NASDAQ:NFLX) pricing speech now. Is this thing on? OK here we go:

With sincere apologies to the estate of T.S. Eliot, that's exactly how Netflix is raising its subscription prices these days. If the ill-fated Qwikster experiment was a big bang -- all noise and no muscle -- then this new strategy is a long series of calculated whimpers.

In the Qwikster scenario, holding on to all of your old Netflix services ended up costing you 60% more. There really wasn't much of a choice: You either paid more or lost some service (DVD or streaming, previously sold as a cheaper package). Those who didn't like that forced march were free to cancel both services, and some people did. Netflix quickly slashed its subscriber guidance for the next quarter and then missed these lower expectations, too. For a company not used to losing subscribers, it was a system shock. By the end of 2011, Netflix shares had dropped 75% below their recent all-time highs.

Of course, the damage was temporary. Today, four years after the Qwikster saga, Netflix shares bought at the end of 2011 have delivered a 1,100% return. The company quickly ( not "Qwikly!") got back to the business of winning more new subscribers than it lost, alongside a dramatic expansion into foreign markets. From 21.4 million domestic streaming subscribers and 1.5 million international customers, the company now serves 42 million Americans and 23 million foreign accounts.

So the damage didn't last, but Netflix CEO Reed Hastings learned some valuable lessons from this debacle. The pricing strategy you see today is a direct result of this trial by fire.

Whimper by whimper
This week, Netflix quietly raised its streaming service price across most of its European markets. The high-definition plan that allows two concurrent streams on the same account was raised from 9 to 10 euros, which works out to an 11% increase. However, the change only applies to that specific (and very popular) plan. The standard-definition service for a single device remains fixed at 8 euros, and the premium service with access to 4K video streams and four active streams at the same time stays put at 12 euros.

This is very similar to the U.S. market, where Netflix raised its two-screen, high-def service from $8 to $9 in 2014. Just like the Europeans, we still have a lower-priced, simpler option available for $8, and the same higher-quality package stands at $12 per month.

The European price increase applies to new customers only, and existing accounts are grandfathered in at the old price for at least one year. Again, that's exactly what Netflix did domestically as well -- my own two-screen plan is guaranteed to stay at $8 per month until "at least May 9, 2016."

In fact, Netflix started a test market for these increases in January 2014. That's when the prices for mid-level streaming services increased in Ireland, with the same focus on new subscribers and the same unmoved pricing on the high-end and low-end services.

This is a very careful approach to higher pricing. For now, Netflix is pushing its most popular plans a little bit higher without moving the other two options. Next time, it could be the low-end plan that sees a pricing boost, or maybe the four-stream, ultra-HD option. Either way, the company will be able to point out that most of its plans are staying where they are, and you can always make a different choice if the new pricing is a burden.

That is, if you still feel that way a year or two later, when the changes actually kick in. By then, the company hopes to have gained your loyalty with a steady stream of original programs in various genres, plus an always-evolving user experience. Hastings wants to earn his price increases nowadays.

Today, Netflix collects monthly fees of $8.33 per domestic customer. That's up from $7.96 in the year-ago quarter. Internationally, the average monthly payment has moved from $7.93 to $7.01. That drop is a direct effect of the strong dollar. Back out that effect, and you could add $1.27 to the average monthly international fee for a grand total of $8.28. The increased European fees will help Netflix overcome this macroeconomic effect, though Netflix wouldn't exactly put it that way. In notifications sent to customers in France, Holland, and other overseas territories, Netflix explained that the new fees would let the company "continue providing good series and films."

The mic-drop moment
Where was I? Yeah, so Netflix is not likely to repeat the drastic price changes of the Qwikster era. Instead, the company rolls out its higher bills in a circular fashion, taking small steps with extra helpings of risk-reducing buffers. At some point, the $12 plan might simply become the new standard, as 4K video takes center stage. Then, we can't be many years away from an 8K option on top of the former top-shelf service, or perhaps add-on charges for 3D and virtual reality video. The march of technological progress never ends, giving Netflix the freedom to play along -- and keep introducing higher-priced products. 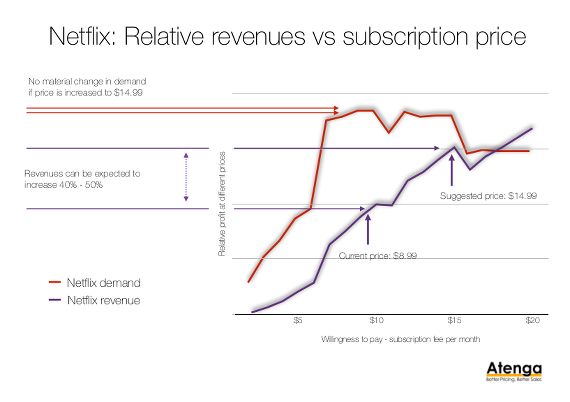 According to price optimization experts at Atenga, the ideal price for domestic Netflix services today is roughly $15 per month. Anything less means leaving money on the table. The picture probably doesn't change much in Western Europe, though we'll see where Netflix sets its launch prices for more price-sensitive markets like Portugal and Spain this fall.

In short, Netflix doesn't want another Qwikster-style panic with fleeing subscribers and falling share prices. That's why the new price-increase policy is gentle to a fault. Thank you.