SolarCity Corporation (SCTY.DL) is going global. The solar company recently announced its first foreign foray, and it's headed south. Here's what you need to know.

A Mí Me Gusta El Sol
Earlier this month, SolarCity Corporation announced its decision to purchase Ilioss, a major commercial and industrial solar developer in Mexico. Not only does this represent another expansion beyond SolarCity's bread and butter of residential rooftops, but it also represents its first international acquisition. While neither SolarCity nor Ilioss disclosed the financial details of the detail, a Reuters report listed the acquisition at $10 million, with PV-tech.org noting potential for an additional $5 million tied to milestones.

Founded in 2012, Ilioss is the unequivocal SolarCity sister to our south. It capitalizes on the same business model, allowing its commercial and industrial customers a zero-money-down power purchase agreement proposition that simply makes sense for business owners. The company's greatest success to date came in March 2014, when it signed Soriana, Mexico's second largest retail corporation, to a 31 MW deal spanning 120 locations across the country.

For SolarCity, Mexico is a natural international entry point. It's close, the skies are clear, the sun is strong, and electricity is either expensive or out. The World Bank estimated that in 2010 (most recent data), Mexico's utilities lost out on 1.3% of all sales due to electrical outages.

¡Bienvenidos a México! from SolarCity Ops on Vimeo.

According to GTM Research, a private research firm, Mexican commercial and industrial entities will install around 1,000 MW between 2014 and 2020. That's nothing huge -- in fiscal 2014 alone SolarCity Corporation installed 503 MW of solar capacity. But since SolarCity Corporation is teaming up with the most established solar company in the country, it's reasonable to expect SolarCity to snag a sizable portion of those installations.

In fiscal 2014, First Solar's international operations accounted for 10% of its total sales, including a 141 MW solar plant in Chile and a 155 MW project in Australia. First Solar also beat SolarCity to Mexico with a 2013 acquisition of development assets, although those projects seem to be in the planning stage for the time being. But across the globe, First Solar, has identified 16,700 GW of booking opportunities, with a sizable chunk in Latin America. 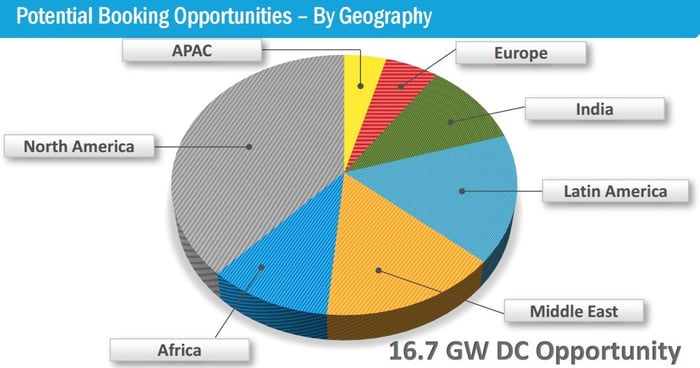 FirstSolar and SolarCity Corporation have expanded internationally in recent years as America's easiest opportunities have started to fill up and fears of a 2017 federal tax credit reduction have begun to creep in -- but SunEdison is synonymous with global solar. At the end of fiscal 2014, the company had around 175 MW of solar projects under construction in Chile, India, Honduras, and the United Kingdom, with just 26 MW in the United States. Likewise, U.S. projects comprised half of its 5,100 MW project pipeline, with other projects spread throughout "Europe, the Middle East, and Latin America" (35%), emerging markets (14%), and Canada (2%). Along with its Terraform Power (TERP) yieldco, SunEdison has a laundry list of international solar spots and a global operations team to successfully build, manage, and sell each asset.

Risks or returns?
With its first foreign investment, SolarCity Corporation will be exposed to new types of risks it's never encountered before. For instance, Mexico's electricity sector is currently in flux. A slew of reforms have dropped electricity prices over the past year, and the establishment of a wholesale electricity market could either help or hurt SolarCity's solar intentions.

Additionally, SolarCity will now have to operate in multiple currencies under multiple tax structures. By leaving ILIOSS as a separate business arm with its current corporate structure untouched, it's improving its chances of a smooth entry. Regardless, SolarCity is now wrapped up in international macroeconomic issues that could see Mexican sales soar or slide.

While the future of SolarCity's Mexican acquisition remains to be seen, its international expansion should be celebrated by investors. America may be one of the most stable places in the world to do business, but competition can be fierce and politics can play an oversized role. International assets bring risk, but they also bring diversity and an entirely new market base. ¡Ándale!