Last Monday, President Obama announced America's first-ever clean power plan. Its regulation will reach every energy stock in existence, and some are more prepared than others. Here's what you need to know.

The motivation
"No challenge poses a greater threat to our future [...] than a changing climate."  As President Obama puts it, America has been setting a lot of records lately -- but not good ones. Extreme temperatures, severe weather, increasing air pollution -- these are all issues the POTUS believes are caused by humans and the carbon we emit.

Our emissions emerge from a motley crew of culprits, but chief among them are power plants -- 32% of our nation's greenhouse gas emissions come from electricity generation. 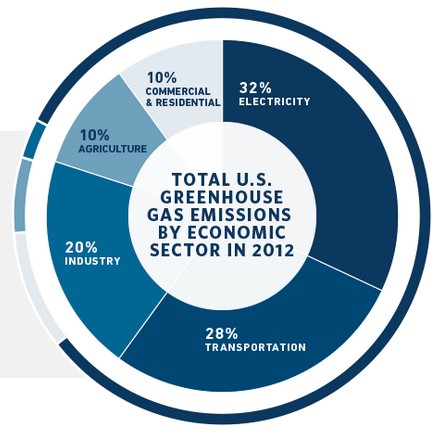 The plan
To de-carbonize our energy economy, the president has set his sights on three main strategies: 1) improve the heat rate of existing coal-fired power plants, 2) switch out coal for natural gas and 3) ramp up renewable energy generation.

The plan will vary by state, allowing each entity to choose which metrics and strategies work best for them (within the confines of a larger mandate, of course). If all goes as planned, power plant carbon pollution in 2030 will be one-third of what it was in 2005 -- solid progress on something many think we're already too late to address.

The impact
From the Clean Power Plan alone, natural gas is a clear winner. For general power production, natural gas will continue on its merry way of replacing coal as America's favorite fossil fuel. In April 2015, natural gas electricity generation surpassed that of coal for the first time ever. 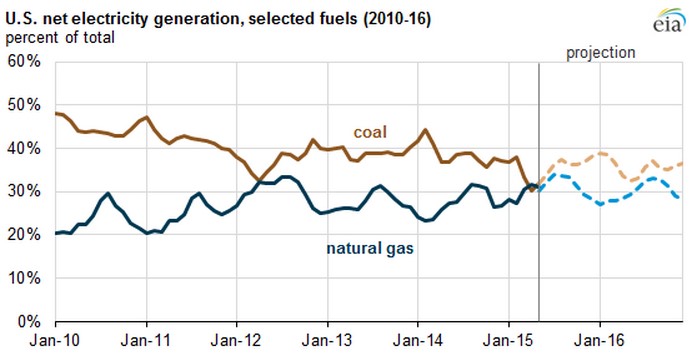 A combination of low energy demand and cheap natural gas proved to be the perfect recipe for natural gas' success, and trends indicate that this will soon be the norm, not the anomaly. The US Energy Information Administration notes that the Clean Power Plan "could result in an even more significant decrease in coal-fired generation." By 2030, natural gas is projected to account for around 31% of our electricity generation, compared to just 25% for coal.

The Price is Right
While it's clear that the Clean Power Plan allows natural gas to clobber coal, natural gas' worst nightmare may be itself. Natural gas use ramped up in America around 2007, as new production hit the market and prices dropped dramatically.

Current cheap prices have allowed gas to take over base load power plant duties from coal in our electricity generation, and the latest estimates keep natural gas a crucial part of our nation's energy portfolio. But its popularity is dictated by its price, and any increase could see other energies snagging natural gas' current share of electricity generation. 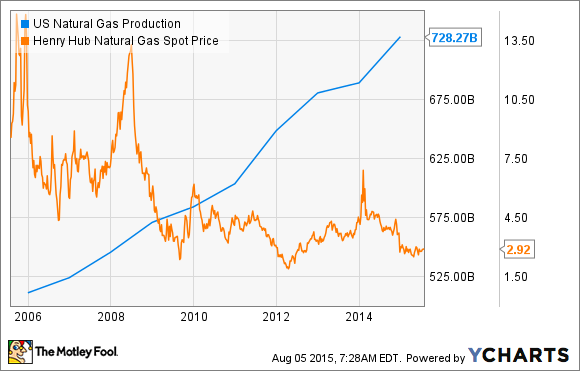 While utilities can mix and match fuel sources, pure play U.S.-based gas exploration and production companies inherently carry more risk with their return. During Cabot Oil & Gas's (NYSE: COG) earnings call two weeks ago, Chairman, President, and CEO Dan Dinges made sure to qualify the quality of his quarter with one very important fact:

Production, cash flow, and EBITDAX (earnings before interest, tax, depreciation, depletion, amortization and exploration expenses) were all down compared to a year ago as the company was hit with especially low prices throughout its Appalachia operations .

The same story held true for Range Resources Corporation (NYSE: RRC), which saw share prices drop 17.7% in July on news of a rough quarter. While both companies had rough quarters, Range got hit extra hard by investors for keeping its foot on the production brake pedal. Cabot Oil & Gas is set to increase production by 10% to 18%  for 2015, but Range Resources is keeping both production and capital expenditures flat as it waits for a better market . 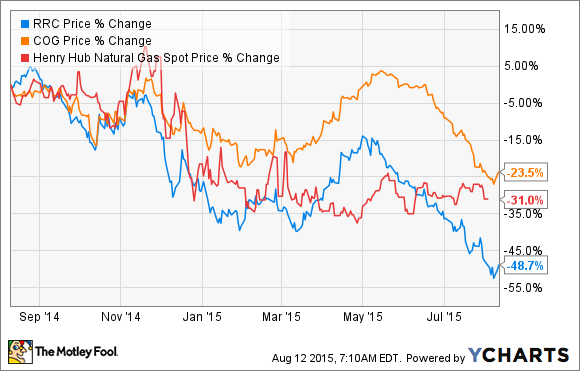 Neither Cabot Oil & Gas nor Range Resource Corporation made any mention of Obama's Clean Power Plan in their earnings announcements, and there's a simply reason why. While electricity accounts for 30%  of U.S. natural gas consumption, that gas-to-electricity link is married only through its cause-and-effect relationship with natural gas prices, the ultimate market mover.

The role of natural gas in our electricity and wider energy economy is still not firmly defined. Many see it as a companion to renewables, the reliable big brother that pushes power through when the sun doesn't shine on solar panels and the breeze doesn't blow through wind turbines. The Clean Power Plan leaves plenty of opportunity for natural gas to continue to be a part of our energy economy, but it doesn't directly dictate its role. For natural gas stocks, the biggest tell will be where prices move over the next few years -- and other drivers, like industrial use, LNG exports, and the future of oil may define that future much more than Obama's Clean Power Plan.