Please ensure Javascript is enabled for purposes of website accessibility
Free Article Join Over 1 Million Premium Members And Get More In-Depth Stock Guidance and Research
By Anders Bylund - Aug 22, 2015 at 9:30AM

Glu Mobile, Zix, and GlobalStar all deserve a place on your penny stock watch list -- for very different reasons.

A modern "penny stock" trades at less than $5 per share. Some of these low-priced shares may be primed for huge returns, while others are cheap for all the right reasons. Here are three penny stocks to watch in the tech sector. These examples range from the exciting to the downright scary. 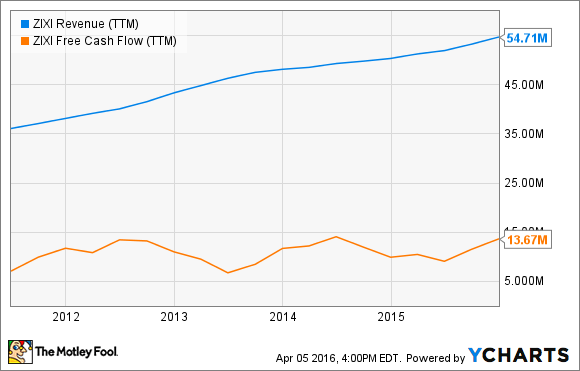 Zix ( ZIXI 0.12% ) mainly provides secure email services to corporate and government clients. Through a mix of easy-to-use encryption and never actually downloading sensitive data to your desktop or smartphone, the company hopes to become a leader in the secure messaging space.

The stock trades near the $4 level per share these days. It's also a very small company, sporting a $220 million market cap and has just $55 million in sales over the last 12 months.

In this day and age, solutions for super-safe communications practically sell themselves. Zix works with a fantastic list of technology partners. The roster of known clients is less impressive so far, but that leaves plenty of headroom for future growth.

Zix's total sales increased by 65% over the last five years in a slow, steady surge. The company's free cash flow is lumpy and unpredictable, but undeniably also on an upward trajectory over the long term: 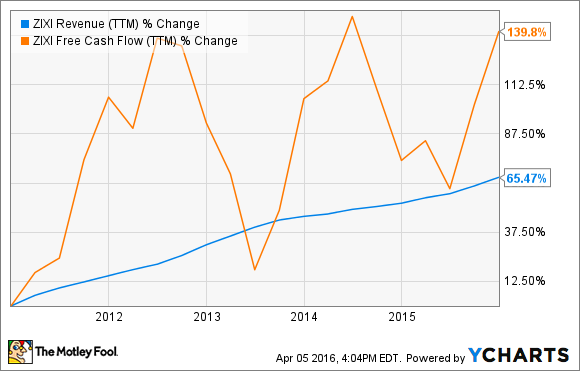 Zix is profitable, can show steady growth, and offers a product with strong selling points in an important market. Moreover, Zix's balance sheet is squeaky clean with $29 million in cash reserves and no debt to speak of.

This is a great example of a potentially interesting stock that probably shouldn't be trading at a rock-bottom valuation. Share prices have fallen more than 20% year to date, despite a perfectly fine fourth-quarter report in February.

Zix is a penny stock to watch, because you might want to own it one fine day. 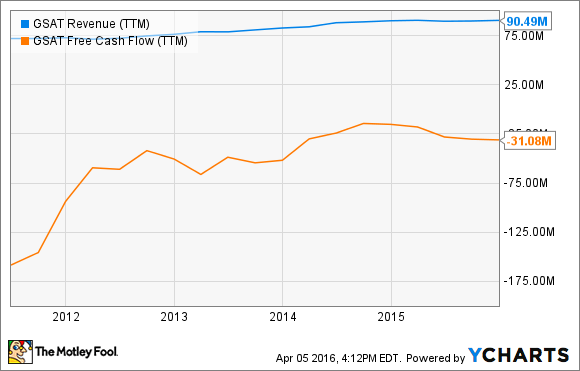 The seller of satellite-based communications services increased its sales by just 33% over the past five years, burning a lot of cash along the way. For one brief moment in 2010, the company could look back at $19 million of positive free cash flow across the previous four quarters. Otherwise, GlobalStar has always consumed more cash than it could generate.

The stock trades for less than $1.80 per share. The bloated balance sheet shows less than $8 million of cash equivalents but $845 million in total debt.

GlobalStar's best business idea -- a low-powered satellite network designed to provide broadband Internet access in rural and underserved areas -- is under fire from the FCC, independent signal testing experts, and a broad coalition of tech giants. The so-called TLPS network could interfere with standard Wi-Fi signals everywhere. Similar concerns have pushed entire companies out of business before.

Short-selling market research firms use GlobalStar as a shining example of awesome negative bets. And why not? The company has fixed its sights on a questionable and very expensive business idea, burning cash by the bucketload along the way. Meanwhile, even this minuscule share price looks high by most metrics.

GlobalStar's price-to-earnings ratio looks reasonably low at 24 times trailing earnings. However, the bulk of those positive earnings were created by non-cash adjustments to the value of GlobalStar's various debt instruments.

Many investors seem ready to defend GlobalStar to their last breath, and it's easy to see why. The stock rose fifteen-fold in just 15 months between early 2013 and the summer of 2014. If you owned it then, you might expect another run of that magnitude. Sadly, I see no signs of a repeat performance here, and the stock has fallen more than 60% from that brief moment of glory.

In short, you want to watch this penny stock from afar. GlobalStar is not the kind of stock you want to take home. 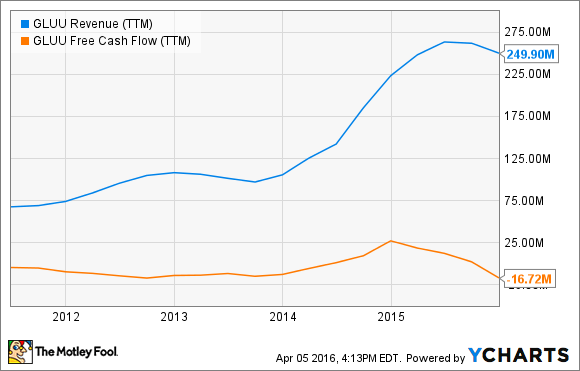 Let's end this penny-stock expedition on a high note. Glu Mobile ( GLUU ) has danced on the edge of bankruptcy in the past but came back swinging.

The maker of games for mobile phones was on the ropes in 2008. The first true smartphones had only just hit the market, and then the global economy took a nosedive. Glu raised some debt just to stay alive, and the stock dipped as low as $0.22 per share for a while.

But then the company started to enjoy a new era in mobile gaming. Glu quickly established itself as an expert in smartphone and tablet gaming, riding a diverse portfolio of titles.

Besides producing mobile games under a license tied into popular action movies and established console games, Glu also comes up with some original ideas. Right now, Kim Kardashian: Hollywood is Glu's biggest seller, representing 24% of the company's fourth-quarter revenue. This company is nothing if not opportunistic.

Thanks to hits like Kardashian, Glu's balance sheet is debt-free while its cash reserves more than doubled over the last four quarters.

Now, it's certainly true that Glu might not be able to copy the runaway success of its Kardashian home run. But that megahit improved Glu's ability to develop and market the next wave of potential cash cows. The company has boosted its R&D budget by 55% in the past two years, paving the way toward a more stable future.

This isn't exactly a must-have penny stock today, but Glu absolutely deserves a closer look as long as mobile gaming remains popular. That might just be forever, in which case we're watching a future titan of that industry as it grows up.