In the wake of a few brutal months, shares of microblogging pioneer Twitter (NYSE:TWTR) have shed all of their post-IPO glimmer. 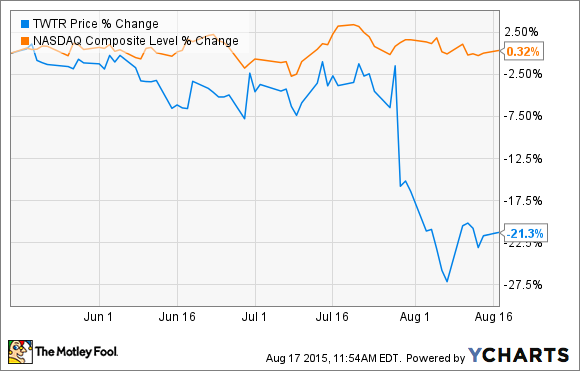 Investors took a cautious tone when Twitter CEO Dick Costolo announced his plans in early June to resign from his post effective July 1,  but Twitter's stock endured its most precipitous plunge after user growth disappointed in the most recent earnings report in late July.

However, although struggling on a number of fronts, Twitter also enjoys a significant number of opportunities, both in its core business and otherwise. In fact, Twitter's increased exposure to online video, particularly its rapidly expanding Periscope app, just crossed a truly massive benchmark.

Periscope's breakneck growth metrics
In an Aug. 12 blog post on Medium, Periscope's management team provided an update on the live-video streaming service's adoption rates since its launch four months ago, and the numbers are astounding. For example, Periscope recently surpassed 10 million total accounts created, roughly 1.8 million of which access the site on a daily basis.

Perhaps more impressively, the audience appears extremely engaged. In the update, Periscope commented that its users streamed roughly 40 years of content on the platform each day.

That equates to roughly 11.7 minutes per daily active user. That number sits behind other addictive social-networking platforms such as Facebook, but keep in mind that Periscope went live only four months ago. The number also doesn't reflect those accessing the online live video broadcasting service from its website, Periscope.tv. This kind of breakneck growth over so limited a time is amazing, and Twitter investors should rejoice over the potential monetization opportunity that accompanies Periscope's rapid emergence.

An overnight success
Twitter reportedly paid slightly less than $100 million for Periscope earlier this spring, and virtually every indication suggests it might be the best decision Twitter management ever made.

Although Periscope remains rightfully focused on audience growth and product development rather than on monetizing its swelling ranks, it still makes sense to examine some basic numbers and metrics to better understand Periscope's current financial potential. To do so, we need to calculate the number of total minutes of video Periscope users consumer daily, which equates to just over 21 million total minutes streamed.

However, projecting out possible ad revenue Twitter might realize as it moves to monetize Periscope, an eventual reality for most high-growth tech platforms, grows complicated quickly. Fortunately for its long-term business prospects, Periscope clearly fulfills a heretofore unfilled gap between traditional TV and an online social network. However, this also makes projecting likely revenues challenging as well.

Monetization probably lags usage growth
What follows are my own estimates, and if they differ at all from reality, I believe they also focus on the likely business drivers at Periscope.

Although a number of possible means of structuring its pricing exist, using the booming market for online videos as the beginning point for projecting Periscope revenues seems the most appropriate. Online video advertisements most often appear under cost-per-mille terms, or CPM, which means the cost for 1,000 impressions. Last year, Credit Suisse estimated that online video CPMs then cost roughly $24.60, substantially higher than other forms of online advertising such as display ads, but still low considering a single ad view implies revenue of only $0.025 for Periscope. And depending on how often you assume Periscope might show ads to its users, this yields a pretty wide range of possible revenue run rates for the service.

Again, these calculations involve a number of assumptions, so don't take them as gospel truth. The point isn't to create the most specific projection of Periscope's possible sales. Rather, the key takeaway for investors should be that Periscope will probably need to continue to meaningfully expand to eventually produce significant financial results for Twitter and its shareholders.

At the same time, it bears reiterating that Periscope launched only four months ago, and that by virtually any measure, the company's accomplishments since its launch are remarkable. The product has tapped into a huge audience, and with only 1.8 million daily active users,  it appears to offer plenty of room for expansion. So while Twitter probably, and correctly, favors a go-slow approach with monetizing this budding online platform, Twitter investors need to realize that some of the most exciting aspects of investing in Twitter stock potentially lie in its non-core subsidiaries, such as Periscope and Vine, which lets users share short, looping video clips.