GM sells more vehicles in China than it does anywhere else. But its bottom line is still less exposed to a China slowdown than you might think.

It's a question that seems to be on lots of investors' minds, if the wild trading in GM shares on Monday is any indication. And it's easy to see why: As the second-largest player in what has become the world's largest auto market, GM is heavily invested in -- and heavily exposed to -- China.

But how big is the risk to GM's bottom line? Let's take a look.

China is GM's largest market -- at least in terms of sales
New-car sales in China have slowed dramatically in recent months. That's likely due to rising concerns about China's slowing economy -- and the unsettling gyrations in China's stock market.

After years of strong growth, vehicle sales in China have stalled. Sales fell 7.1% in July, the third straight month in which the market declined on a year-over-year basis. For the year through July, sales are up just 0.4%.

Thanks in part to some strong new products, GM has weathered the storm better than many of its rivals, at least so far. GM's sales were down 4% last month. For the year, they're up 3.3%.

GM, via its joint ventures, sells more vehicles in China than it does anywhere else in the world, including the U.S. That makes China a big deal to GM, at least in terms of sales numbers.

But what does that translate to in dollar terms?

GM's profit in China is important, but it still makes more elsewhere
Financial results for GM's huge China operation are reported as part of its "International Operations" unit; for the most part, the General doesn't report profit and loss results for China alone.

But we can get a ballpark estimate from the numbers GM does report. Most (not all, but most) of the vehicles GM sells in China are built there by the joint ventures that GM participates in with local Chinese automakers. GM reports the profit from joint ventures as equity income.

GM does have other small joint ventures outside of China. And it does sell a few models in China that are imported from elsewhere, meaning that the income from those sales won't show up in equity income. But the equity income reported by GM's International Operations unit every quarter is a rough proxy for how much money GM is making in China.

The chart below shows that equity income as a percentage of GM's total pre-tax income for each of the last four quarters. 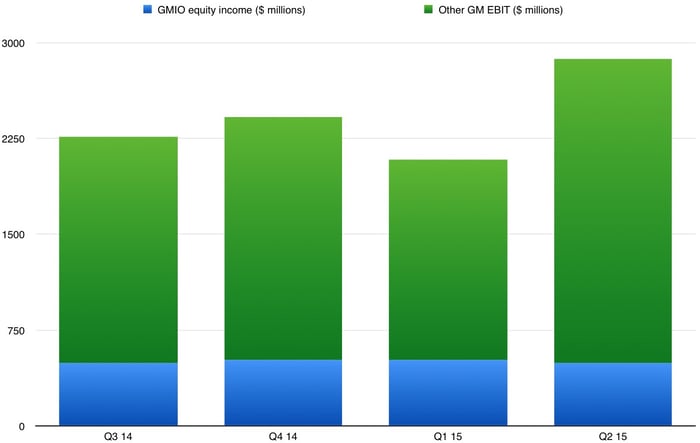 As we can see from the chart, GM's income from China as a percentage of its total earnings is not quite as big as you might expect from its huge sales numbers.

What's more, the threat to that income from slowing industrywide sales may not be all that big, because GM's "mix" of products in China has been swinging toward more profitable market segments.

SUVs and Cadillacs will help GM's bottom line weather the storm
Last quarter, GM's operating profit margin in China was 10.2%, a very strong number that was buoyed by good sales of Cadillacs and a hot new Buick SUV. Those products should continue to bolster GM's China margin even if overall sales continue to slip. And indeed, GM reaffirmed earlier in August that it expects to maintain strong operating profit margins of around 9%-10% in China for the full year, despite the slowdown.

Long story short: Unless things in China get much worse, GM can probably weather this storm without too much trouble. And even if GM's profit from its Chinese joint ventures does get trimmed for a few quarters, the total hit is unlikely to make a huge scary dent in GM's total global earnings.

John Rosevear owns shares of -- and The Motley Fool recommends -- General Motors. Try any of our Foolish newsletter services free for 30 days. We Fools may not all hold the same opinions, but we all believe that considering a diverse range of insights makes us better investors. The Motley Fool has a disclosure policy.