Shares of Chipotle Mexican Grill, Inc. (NYSE:CMG) didn't enjoy a propitious first half of the year, breaking into a double-digit decline from February through June. Yet leading up to the company's second-quarter earnings report on July 21, and for a few weeks afterward, the CMG ticker recovered sharply: 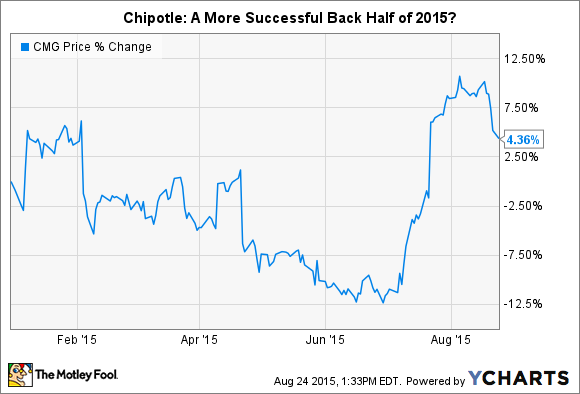 The rebound is a nice example of what a strong second-quarter report can do for a company whose shares have languished in the year's first few months. In this case, Chipotle's revenue expansion of 14.1%, along with an affirmation of a brisk store-opening schedule, seemed to allay investor fears that the company's growth story was beginning to fade.

Today we review five key points company management made during its second-quarter earnings call with analysts last month. These themes provide some insight into investors' recent comfort with Chipotle and also inform the outlook for the rest of the year.

1. Price increases aren't the only growth weapon in our arsenal
"Our sales increased 14.1% in the quarter to $1.2 billion driven by new restaurant openings and a sales comp of 4.3%. ... [T]he comp was driven mainly by our price increase from last year, which contributed 4% to the comp."
-- John Hartung, CFO

Chipotle's comparable-store sales have slowed considerably recently, a result of tough comparisons to former growth. For example, this time last year, the company's Q2 comparable sales expanded a sizzling 17.3% versus the prior year's quarter. Against a comparison like this, the current quarter's 4.3% increase doesn't appear so weak.

As explained in the quote, the comparable-sales gain was made up almost entirely of price increases. These were instituted last year to counter the rising price of beef, and with Q2 2015, the increases are now "lapped," so Chipotle won't get any further comparable-sales lift going forward.

Some room for strategic price lifting still exists for the remainder of the year, however. During the call, management confirmed that its much publicized carnitas (pork) shortage would be fixed by year-end, as it's engaged a British supplier, Karro Food Group, to supply its pork shortfall.

Hartung stated that Chipotle hasn't raised steak and barbacoa prices in the roughly 40% of restaurants that are still awaiting carnitas replenishment. This is to avoid punishing customers who trade up to steak because of the non-availability of pork. An opportunity to normalize beef pricing will arise as Chipotle gradually reintroduces carnitas to its under-served markets.

Even with a more constrained pricing program for the rest of the year, Chipotle can rely on its aggressive store opening schedule, as Hartug mentioned, for top-line growth. The company confirmed that it's on target to hit or exceed the high end of its 2015 goal of opening between 190 and 205 restaurants by year end.

2. We're maintaining focus on one of our biggest competitive advantages: our ingredients
"Simply because something is deemed safe doesn't mean that it's necessary, or that it makes our food better in any way."
--Steve Ells, co-CEO

In his prepared remarks, Ells said Chipotle had completed its transition to using only non-GMO ingredients in all its restaurants during Q2 2015. In his simple yet forceful statement above, Ells explicitly counters the argument that GMOs haven't been proved to pose long-term health risks to consumers, by pointing out that even if that's so, the company finds no persuasive reason to use such ingredients.

Ells also revealed that Chipotle is researching and developing a fresh tortilla that can be manufactured at commercial scale, in conjunction with Washington State University's Bread Lab. The tortilla will be made without any additives, preservatives, or artificial ingredients, and from just four ingredients: flour, water, vegetable oil, and salt.

These actions serve to remind Chipotle's health-conscious, not to mention socially conscious, customers, that they can trust the chain to keep improving ingredients, as they purchase food that aligns with their values. Management believes that cultivation of its brand perception, despite economic risks posed by events such as the self-imposed carnitas shortage, is a future growth driver.

3. Throughput remains core to our success
"During the quarter, we held a national throughput competition to emphasize the importance of the four pillars [of throughput] in our restaurants."
-- Montgomery Moran, co-CEO

Throughput, the rate of sales in a given time period, is one of Chipotle's management team's most cherished metrics. That's because so many of the company's locations have long lines at key dayparts such as lunch and dinner. The faster CMG can serve its customers, the higher the sales, as fewer potential purchasers will turn away if they have a sense that lines are moving quickly. Bucking recent trends, though, Moran noted that Chipotle didn't see an increase in throughput during the quarter.

Because management focuses so intensely on throughput, shareholders should be sensitive to any signs of a slowdown. After all, by channeling customers at ever faster rates through its assembly-line service model, Chipotle has been able to avoid the significant marketing budgets that some of its peers undertake as a way to improve sales. Moran signaled that he would like to see improvement again, even if on an incremental basis, in Q3, so investors should make a mental note to check in on this next quarter.

4. We're increasing benefits and raising wages to retain the best talent
"We expect the incremental costs of these [labor] investments to be about $2.5 million on a quarterly basis, beginning in the third quarter."
-- Hartung

During the quarter, Chipotle initiated a one-time compensation adjustment for kitchen managers and service managers. It also increased paid vacation and added paid sick days and tuition benefits for hourly workers. The impact of these adjustments will be $2.5 million per quarter in additional costs, beginning in the third quarter.

These changes come on top of hourly wage inflation of 4.2% during the quarter, which Hartung called the "fastest [rate] we have seen in many years." Chipotle doesn't mind the compensation expansion, however, as management is convinced that paying well and selecting the best job candidates possible will drive value for the company in terms of customer experience and throughput.

As if to emphasize the point, Chipotle made news this week with an announcement that it will attempt to hire 4,000 workers, a number equal to roughly 7% of its work force, in a single day on Sept. 9. This "National Career Day" might be seen as glossy PR, but Chipotle's logic on investing in capable employees always seems to be borne out in its financial results.

5. We won't jump on the loyalty-card bandwagon anytime soon
"With regard to loyalty, that's a tricky subject. We've studied this in-depth, and we don't believe the general supposition that loyalty will make less frequent customers more frequent."
-- Mark Crumpacker, chief creative and development officer

Answering an analyst's question on whether the company's recent success in engaging customers through its mobile app will be followed by a loyalty component, Crumpacker gave a thoughtful response. First, he made it clear that a loyalty program won't necessarily increase revenue through giving occasional customers more incentive to visit.

Crumpacker went on to state that companies implement loyalty programs in part to collect useful analytical data on customer spending patterns. Chipotle believes the same or similar data can be garnered through targeted offerings, such as gift cards or special promotions, through its mobile app, and perhaps from third-party applications.

These comments reveal the extent to which Chipotle is protective of its margins and cautious about a tweaking a business model that doesn't necessarily need fixing. To paraphrase Ells' sentiments regarding ingredients, just because Chipotle has the ability to offer an incentive program and mine data doesn't mean that it's necessary or even beneficial to the company's gross margin to do so.