What's happening: After closing down 4.6% yesterday, shares of Celldex Therapeutics (NASDAQ: CLDX) gapped up 6.4% at the open and climbed some more to a 12% gain compared to yesterday's close.

But the increase needs to be put in perspective; shares traded at this level as recently as last Thursday. While this is a big move today, it's not out of the norm for Celldex Therapeutics. 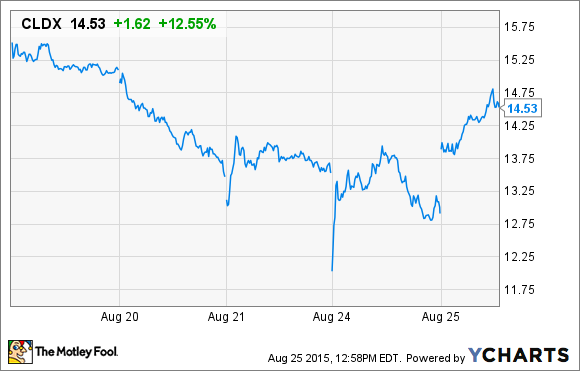 Why it's happening: Biotechs often go on roller-coaster rides for no particular reason, and it's even more common after a sharp decline in the stock price, as investors try to figure out the new value for a drugmaker without any marketed products.

Earlier this month, Celldex Therapeutics fell 20% in one day after management gave a regulatory update for Rintega, its brain cancer vaccine. Investors were hoping the data from a phase 2 trial, dubbed ReAct, would be sufficient to gain Food and Drug Administration approval, but regulators told the company that they'd have to wait for a phase 3 trial, dubbed ACT IV, before submitting a marketing application for Rintega.

The phase 2 data was certainly impressive, but the trial was small enough -- just 72 patients split into two groups -- that it's hard to say whether the longer survival time is real. Patients that received Rintega and Roche's Avastin lived for a median of 12 months compared to 8.8 months for those that just got Avastin.

Shares of Celldex Therapeutics remain in flux because it isn't clear when the ACT IV trial will provide enough data to get Rintega approved. There will be an interim look at the data toward the end of this year or early 2016, but if the data isn't strong enough to stop the trial at that point, patients will continue to receive their treatments until the trial wraps up in late 2016. Positive interim results would be a double dose of good news because they make it likely that Rintega gets approved with only a minor delay, compared to waiting for the full trial results.

Don't be surprised if Celldex Therapeutics' share price remains volatile until investors know if the interim data is strong enough to stop the trial.