Please ensure Javascript is enabled for purposes of website accessibility
Log In Help Join The Motley Fool
Free Article Join Over 1 Million Premium Members And Get More In-Depth Stock Guidance and Research
By Daniel Sparks – Aug 26, 2015 at 8:00AM

One of the perks of buying one of Tesla's (TSLA -8.62%) Model S sedans is that it comes with free long-distance travel, forever. Tesla's Supercharger locations positioned strategically along major highways, combined with the Model S' industry-leading range, enable Model S owners to travel up to about 265 miles between fast, free charging stops while driving long distance. This free and robust network of fast-charging stations is a key differentiator between Model S and every other electric vehicle. But what does offering this sort of convenience cost Tesla? Not as much as you would think.

Tesla's rapid Supercharger expansion
When Tesla began selling electric vehicles, it knew one of its biggest problems would be addressing "range anxiety," or a fear of running low on charge, or -- even worse -- completely out of juice.

But the company has been tackling this challenge with a vengeance. Its Supercharger locations, which are designed to support long-distance travel in a Model S, have been rapidly spreading across the North America, Europe, Australia, China, and Japan. To put the growth in perspective, Tesla's Superchargers increased fivefold in 2014 and now this number is on pace to double in 2015. Also, since the company announced it had 2,000 Superchargers at nearly 400 Supercharger stations in late February, its network has grown to 2,810 chargers at 499 locations.

And the company's Destination Charger network, which provides slower charging at locations Model S owners might stay at for longer periods of time, e.g., restaurants, shopping centers, and hotels, are spreading like wild fire since the program was first launched in the second quarter of 2014. 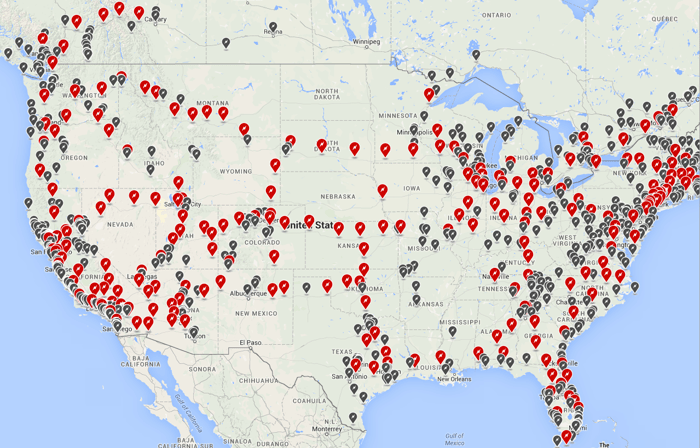 Investors unfamiliar with the ownership experience shouldn't underestimate how much value this network provides for owners. Despite how new Tesla's charging network is and how small it is compared to an abundance of gas stations, it's more useful than some might think. Why? Anyone attempting to understand charging infrastructure for electric vehicles needs to give weight to the millions of homes already wired with electricity. By charging at home, Tesla owners can start every day with a full charge, making Superchargers only necessary when traveling long distance. The entry-level Model S' 230-mile EPA-rated range is almost always enough for most Tesla owners' daily driving. So, strategically positioned charging locations on major highways is all most owners need to make driving a Tesla just as convenient as driving a gas-powered vehicle.

How much does Supercharging cost Tesla?
Offering Supercharging free of charge to Model S owners, Tesla pays for the installation and maintenance of these fast-charging stations. But is this level of service truly sustainable?

As far as maintaining Tesla's Superchargers, the company noted in its second-quarter 10-Q that "these costs were immaterial for all periods presented."

Summing it up, while it isn't cheap to build Supercharger locations initially, the cost is small as a portion of Tela's total spending on growth initiatives and totally manageable. And offering free charging once these Supercharger locations are built is virtually unnoticeable when compared to Tesla's other costs of goods sold and operating costs.

Tesla hasn't said yet whether its upcoming Model X will include free Supercharging. But a review of the costs involved with providing this perk suggest it's highly likely free Supercharging for life will not be an exclusive benefit for Model S owners.