With that said, here are two great dividend stocks for your watch list and one to avoid.

First up: General Motors (NYSE:GM)
There are many investors out there wary of investing in a company that has so recently emerged from bankruptcy, and such a controversial bankruptcy at that. However, General Motors is truly a different and much better managed company since the dark days of the recent recession.

Currently the automaker's $0.36 per share quarterly dividend is fetching investors a high 4.5% yield, but it's the potential upside with GM's earnings that make it a very intriguing dividend play.

Right now General Motors' is performing well in its two most important markets: North America and China. During the second quarter 2015, GM set its quarterly record – albeit only pertaining to GM since emerging from bankruptcy in 2009 – with $2.8 billion in adjusted EBIT. Its EBIT-adjusted margin in North America checked in at 10.5%, which is a very healthy level.

In China, General Motors posted a record first half of 2015 with a 4.4% increase in sales to 1.7 million units. Its market share also increased 10 basis points to 14.6% in the first half of 2015 compared to the same time period last year.

Overall, General Motors' new vehicle designs and quality are arguably the best they have been in decades. Sales of SUVs and full-size trucks are booming and will continue to power profits for Detroit's largest automaker, and the company is pouring $12 billion into its luxury Cadillac brand to design eight new models by 2020 and another two during the following decade, which will help boost GM's top and bottom line performances.

Also, a factor that many investors overlook is the upside potential of General Motors Financial. GMF is expected to generate more than double its $0.8 billion EBT-adjusted earnings by the end of 2018. There is a lot of upside for GM in the near future, and it's an intriguing dividend play with a current yield of 4.5%.

Next up: The Boeing Co. (NYSE:BA)
There's a lot to like about owning shares of aviation juggernaut Boeing. One of those reasons is its strong dividend. Earlier this year Boeing increased its dividend by 25% to $0.91 per share for a yield of 2.5%. It's just the latest move in a recent trend of Boeing's surging dividend; at the time of the increase it marked an 88% increase over the previous two years and an increase by 192% over the previous decade. 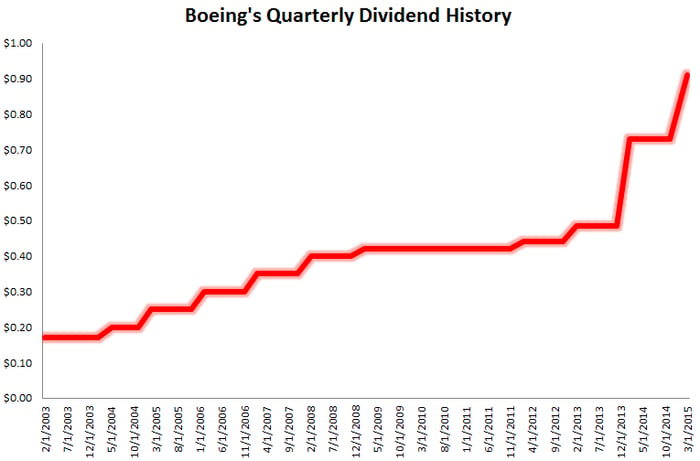 One factor behind Boeing's success is its economic moat, which is built around the high barriers of entry to the aviation industry. Boeing has gained invaluable technical knowledge required to design, produce and certify commercial aircraft and operates in what is essentially a market duopoly with rival Airbus for the industry's bread-and-butter single and twin-aisle commercial aircraft segment.

Looking ahead, Boeing's near-term and long-term future seems just as bright for investors. Boeing boasts an order backlog valued at nearly $490 billion, which is essentially five years worth of sales. In addition to that, Boeing anticipates the world will need roughly $5 trillion worth of new and replacement commercial aircraft over the next two decades. In the near term, Boeing will continue to increase production rates on its commercial aircraft and once the Dreamliner begins to turn a profit, the company's bottom line will receive a boost.

In addition to all of those positive factors helping Boeing's stock price soar over the past 18 months, investors have to remember that while the U.S. government has cut back on defense spending, Boeing's defense segment could also generate better revenue and profits down the line if the government decides to increase military spending.

For all of those reasons, Boeing is also a very intriguing dividend stock, but the following company is one to avoid for now.

Avoid Caterpillar (NYSE:CAT)
At first glance some investors might be tempted to jump on board and buy shares of Caterpillar. Caterpillar has continued to increase value returned to shareholders despite having a steep decline in its business. Caterpillar's dividend currently sits at $0.77 per share quarterly for a yield of 3.9% -- but the near-term looks just as gloomy for the company's overall prospects. 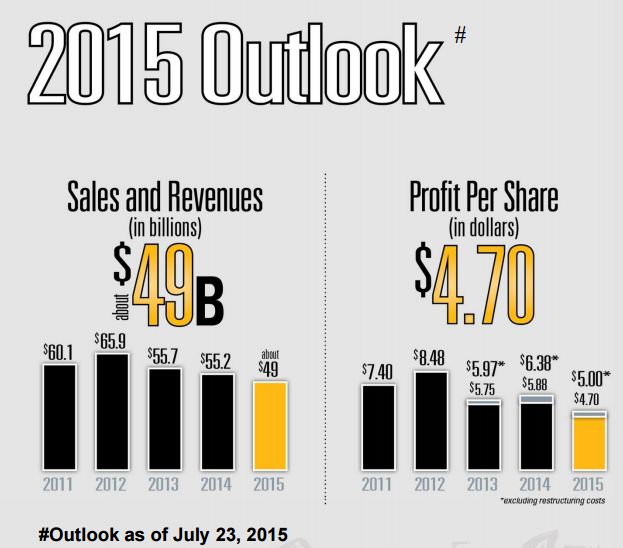 Caterpillar's business is getting hammered on multiple fronts across the globe. Caterpillar is still struggling with severe weakness in mining as well as weak demand in China and Brazil for construction related sales. In addition to weakness in mining and construction abroad, lower oil prices have caused a slowdown and fewer orders for Caterpillar's oil-related applications. To make matters worse the stronger U.S. dollar is causing sales in many countries to translate into fewer dollars than management had previously expected.

While Caterpillar has continued to shell out value to investors in the form of dividend and share repurchases during a tough business cycle, the near-term looks just as gloomy for its overall business. Investors would be better off avoiding Caterpillar in the near-term until demand for the company's global products improve over the next two to three years.