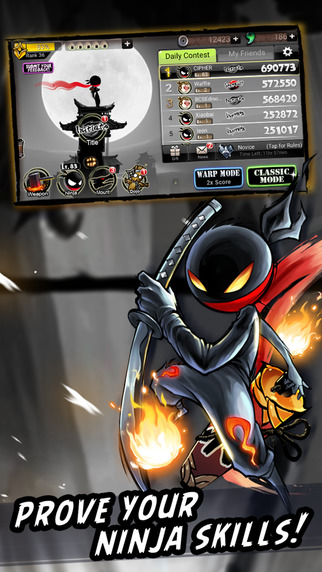 The runner game finds players navigating through obstacles by running, diving, and even flying. It's free, but like most freebies there are in-app purchases along the way to enhance both the gaming experience and NetEase's pocketbook.

Given the flurry of apps that hit the market on any given day it would be presumptuous to assume that Speedy Ninja will be a hit. There's a lot of competition out there, and NetEase Games naturally doesn't have the same kind of brand recognition out west as it does closer to its home turf.

However, this will be just the first of many games that NetEase rolls out for western audiences. Earlier this month it announced that action role-playing game Eternal Arena and Tome of the Sun as well as strategy role-playing game March of Heroes are either in closed beta or in pre-registration for a closed beta. Depending on how the beta tests go, some of those games will be made available for North American audiences.

This has been a good week for NetEase, Chinese market swoon earlier in the week notwithstanding. It shelled out a record quarterly dividend of $0.44 a share on Wednesday. It also received an analyst upgrade when Standpoint Research raised its rating from hold to buy. It also set a price target of $145.

NetEase has been one of China's biggest winners over the years. It was one of the first Chinese dot-com darlings to go public during summer 2000. It hit the market at $15.50, a figure that is adjusted down to $3.875 after a 4-for-1 stock split. This makes NetEase a 30-bagger over the past 15 years, and that's without accounting for the generous payouts that have been lining the pockets of shareholders in recent years. NetEase has a policy where it returns roughly 25% of its earnings to its investors in the form of a quarterly dividend, explaining why we're at record levels on the payouts as NetEase's bottom line expands.

NetEase has come a long way. Its original prospectus in 2000 played NetEase as a Web portal. Offering free email and attracting an average of 20 million daily page views across its different portal channels seemed like the right model until the dot-com bubble burst. NetEase bounced back by rolling out PC-based online games that now account for the lion's share of its business.

The analyst upgrade, fat dividend, and new app in a new market are welcome developments. They will help build on NetEase's already impressive selling points that include a better than expected 64% surge in year-over-year revenue growth in its latest quarter. With the stock still surprisingly cheap at 17 times this year's projected earnings there should be more bags for this 30-bagger to score if its new westward mobile push pays off.