Disney (NYSE:DIS) stock hit an all-time high just before the entertainment giant posted second-quarter results on Aug. 4. But it has been a rough ride for investors since then: Shares are down 20% in the past three weeks. 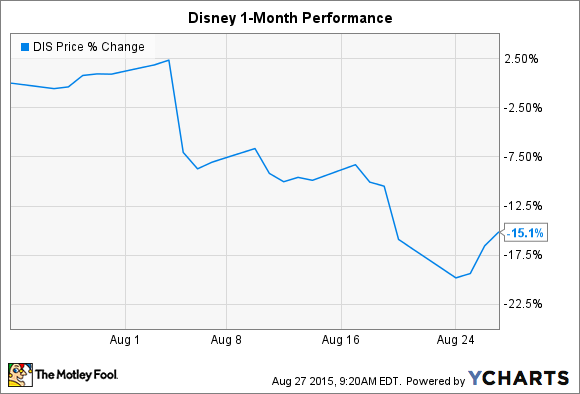 For the quarter that just closed, Disney managed growth across its businesses while generating record earnings of $1.45 per share. Profits were particularly strong in its consumer products division, which booked a Frozen-and-Avengers-fueled 27% income jump. At 40% operating margin, consumer products is Disney's most profitable segment and is responsible for most of the company's income gains so far this year.

However, Wall Street was spooked by the news that ESPN is losing subscribers as advertising profits slump at the broadcasting segment. Toss in a broader market correction, and investors can now buy Disney at a market capitalization of $170 billion, down from $205 billion in early August.

A quick rebound ahead?
A few Wall Street companies dialed back their expectations for the stock in light of the second-quarter results. Bernstein's Todd Juenger, for example, downgraded Disney along with several other media companies. Advertising-supported TV businesses are now "structurally impaired assets," he wrote, as ad revenue and affiliate fees are likely to keep falling.

But FBR analyst Barton Crockett thinks Disney shares could quickly march back up to another all-time high. The investment house reiterated a "buy" rating on the stock last week and forecast a 25% rise to $124 per share.

Crockett thinks advertising sales and profits will rebound over the next six months as the NFL season heats up. Beyond that, he sees December's Star Wars: Episode VII movie launching what could become the biggest movies series yet -- complete with unprecedented merchandising opportunities for The House of Mouse.

Disney executives aren't quite as optimistic about the Star Wars franchise. CEO Bob Iger suggested in a conference call with investors that earnings forecasts might be getting out of hand. FBR's Crockett, for example, thinks the movie series could generate well above $1 billion of profit per film.

But Iger warned analysts that the appetite for Star Wars hasn't been tested in theaters for a decade, and many parts of the world aren't as familiar with the franchise as we are in the U.S. "We just want to be careful here that the market doesn't get too far ahead of us or ahead of itself even on this. Let's all continue to anticipate the movie and be optimistic about it, but we have to take a wait-and-see approach in terms of what it will do," he said.

What a Fool believes
Assuming Disney matches Wall Street's profit forecast for the current quarter, it will earn $5.08 per share for its full 2015 fiscal year. That puts the stock valued at below 20 times earnings, a price that it has only touched a few times in the last two years. It's anyone's guess whether shares will snap back to new highs as Star Wars merchandise starts selling around the globe next week -- or whether advertising worries will send Disney lower.

But long-term investors should make out fine either way. Disney is a diverse entertainment powerhouse that in five years will likely be earning significantly higher profits from its studio, theme parks, consumer products, and media divisions. That group of businesses is even more attractive at a 20% discount from early August prices.