As you point out, and I think this is a major point that many people miss, the LTE penetration in China is only at 12%. And China doesn't possess the level of fiber that some other countries do, and so in order to get the great video performance, et cetera, raising that penetration is really great. I think that really plays to an incredible smartphone future there.

China is such an important storyline to Apple's (NASDAQ:AAPL) future growth that investors scrutinize every data point that comes out related to the company's prospects in the Middle Kingdom. On the last conference call, CEO Tim Cook noted that China has a relatively modest LTE penetration rate of only 12%, underscoring Apple's opportunity to capture smartphone buyers as they transition to the faster cellular technology.

That was fast
It's funny how investors talked about Apple's deal with China Mobile for years before it materialized, and once the partnership was officially inked, no one seemed to pay much attention to it. There's not a lot of data about the mix of iPhones among carriers, but looking at high-level user data is still pertinent. What's incredible is just how fast LTE has been adopted by China.

China Mobile was the first to launch 4G LTE service at the end of January 2014 alongside the iPhone. China Unicom followed up a couple months later with its own 4G LTE service in selected cities in March 2014, followed shortly thereafter by China Telecom in July 2014. China Mobile breaks down subscribers by 3G and 4G, while the other two carriers aggregate 3G and 4G together.

But China Mobile is the largest by far, so even just looking at the No. 1 carrier gives a lot of insight into the adoption curve. At the end of July, China Mobile had a strong 208 million 4G subscribers, representing over 25% penetration of its total 819 million subscriber base. 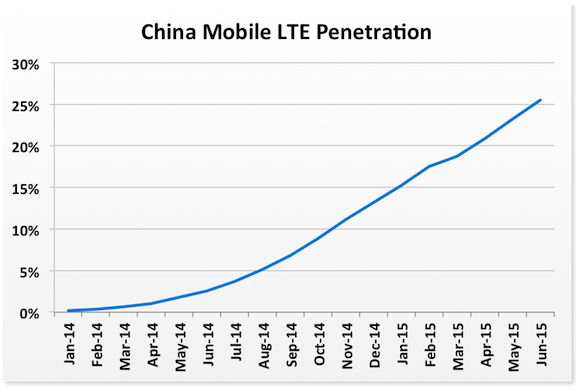 That all happened within a year and a half. To compare, it took China Mobile five years to get to 25% 3G penetration when 3G launched in January 2009. 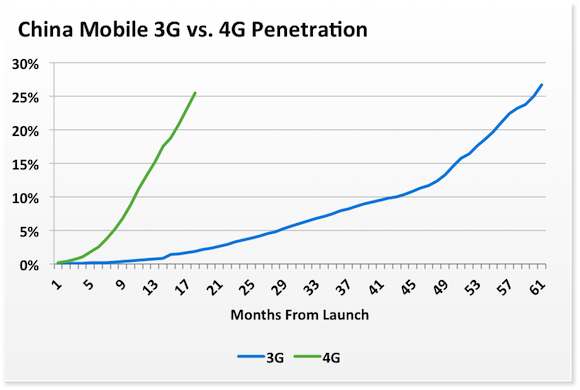 China Telecom said that it had 29 million 4G subscribers at the end of June, representing 15% penetration of its total subscribers. China Unicom has been lagging its two rivals when it comes to 4G subscriber additions, and it's slowly bleeding customers to the other carriers.

There's plenty more where that came from
China's Ministry of Industry and Information Technology said that the official number of 4G users in July surpassed 250 million for the first time, which would actually be about 20% penetration (notably higher than Cook's estimate) of the 1.3 billion total subscribers within China. Regardless, you can't help but be impressed by this growth. 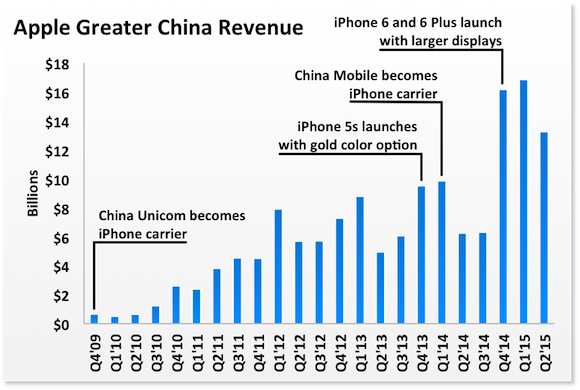 All of the recent macro fears don't acknowledge the fact that the Chinese consumer is still on the rise, and a lot of them want to buy iPhones.