The markets took a wild ride from despair to sunny shores this week. Daktronics, VMware, and Fitbit lost their tickets to paradise and stayed down instead. Here's why.

The stock market just finished a weird week, powered by worries about the Chinese and American economies. The S&P 500 index started Monday's trading with a 5% plunge, but recovered to post a 0.9% gain for the entire week. Dow Jones Industrials swung from a 6% Monday drop to a 1.1% final gain. The tech-heavy NASDAQ Composite market barometer outdid them both, falling as much as 9% at first but then posting a 2.6% five-day surge.

But some tech stocks stretched the bumpy market ride to extremes. Three companies in particular missed out on that positive end to the week -- in a big way.

Virtual computing veteran VMware (VMW -0.95%) might buy out its own parent company, data storage giant EMC (EMC), according to reports this week. That speculation dropped VMware's shares more than 8% lower while EMC's stock surged. Electronic scoreboards expert Daktronics (DAKT 1.50%) plunged as much as 30% because of a disappointing first-quarter report. Finally, wearable fitness tracker specialist Fitbit (FIT) took a 12% haircut at the end of the week, when independent market researchers reported weak demand for the Fitbit brand and surging interest in alternatives from Apple (AAPL -3.00%) and others.

Want to dig deeper into these unfortunate tech stocks? Can any of them roar back to full health? You'll find some answers right here: 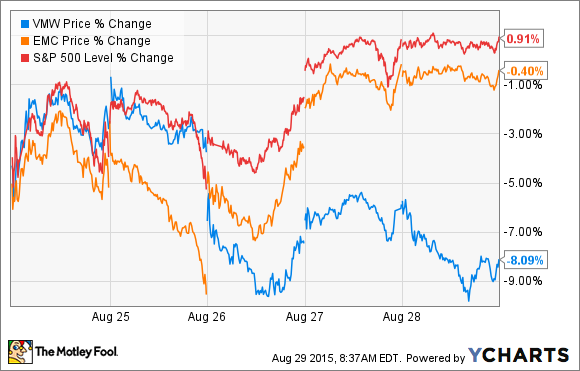 Analysts and investors are growing weary of this dynamic duo's plodding returns. Over the last five years, EMC stock gained 36% while VMware shares lost 2% of their value. Meanwhile, the S&P 500 surged 87% higher, leaving both of these stocks far behind.

According to reports by Re/code's Arik Hesseldahl, EMC first considered buying out the 20% of VMware that it doesn't already own, consolidating the two companies into a single business. That move could save the companies as much as $1 billion a year in cost-cutting efficiencies. The company also considered other options, such as selling VMware to another tech giant or spinning out underperforming operations on their own.

But the one idea that's getting serious play in EMC's boardroom is to let VMware acquire EMC instead. That move would achieve the same cost-cutting ends as EMC buying out VMware, but would also add a few billion of new debt to the combined company's fairly lean balance sheet and naturally put the operations under the more marketable VMware brand name.

EMC shares trade at roughly 12 times forward earnings today while VMware stock can be had for 17 times forward estimates. That's another reason to do a reverse merger, since VMware's shares simply have more buying power per stub at these prices.

All of these ideas are still firmly in the stage of unconfirmed rumors. EMC CEO Joe Tucci is on the verge of retirement and needs to settle this situation before waving goodbye. Activist investor firm Elliott Management would prefer to see VMware spun off into an entirely separate company, leaving each business to stand on its own. And there are enough other options on the table to make Olympic ice skater Michelle Kwan's head spin.

At the end of this high-stakes attitude spin, Tucci may very well choose to let VMware buy EMC. It would certainly make sense to add some debt to the operation at today's historically low interest rates (which may not last much longer, so hurry up already). Me, I'm with Elliott. Cut the cord between the companies entirely. Let EMC be a storage expert, let VMware focus on its virtual machines and cloud computing roots, and let investors choose which business they want to own.

There are enough cross-industry conglomerates in the tech sector already. Maybe even too many. I'm not rooting for the creation of another one. 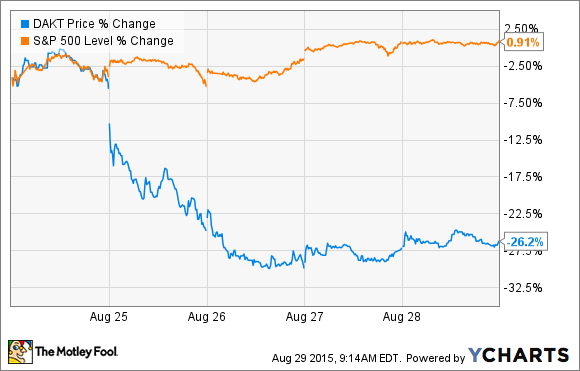 In Tuesday morning's first-quarter report, Daktronics saw sales falling 10% year over year to $150 million, far short of Wall Street's $176 million consensus estimate. On the bottom line, earnings fell from $0.20 to $0.09 per diluted share. Here, analysts were looking for $0.14 per share.

The company doesn't offer formal guidance on a quarterly basis, and its results often land far afield of the Street's unguided estimates. But this was a rough landing, even against that backdrop. Adding injury to insult, the year-ago period's $19.8 million of positive free cash flows were erased and turned into $17.2 million on the negative side.

The stock is now trading at levels not seen since the fall of 2012, with a forward-looking P/E ratio below 12. That's one of the lowest P/E readings Daktronics has seen in the last six years.

On the upside, fresh order booking were strong, growing Daktronics' order backlog by 8% in this quarter alone. The company notched important wins such as providing scoreboards for the new Minnesota Vikings stadium and many smaller orders for professional and college arena renovations.

Importantly, the timing of each project is always unpredictable. The company depends on a relatively small number of fairly large orders to drive its business forward, which makes for lumpy quarterly figures. That's why management doesn't offer strict guidance numbers, and why analysts have a hard time predicting where the next quarter will land.

That still leaves room for a healthy long-term business, even in the face of short-term disappointments like this report.

"Our strong backlog and continued order success provides us confidence of strong future financial performance," said Daktronics CEO Reece Kurtenbach. "During the first quarter, we continued to develop new and enhanced solutions for the market. For example, we released an ultra-high resolution product this quarter. We also invested in additional manufacturing capabilities to serve customer demand for indoor video solutions."

In other words, Kurtenbach sees nothing fundamentally wrong with his business -- just another helping of unfortunate order timing.

And I think he's absolutely right. This could be a great time to build a Daktronics position. 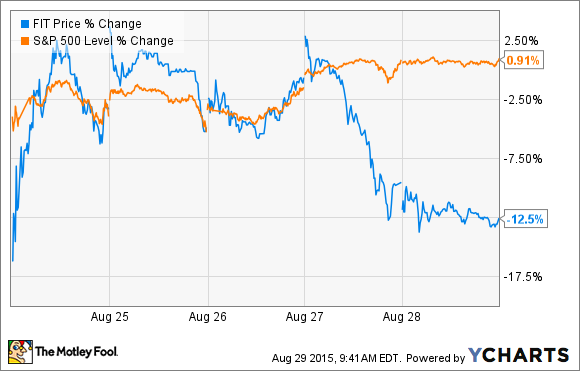 According to a fresh market report from IDC, Fitbit remains the largest player in the global market for wearable computing devices. Its unit sales increased 159% year over year. The company holds a dominant 24% market share overall. Sounds great, right?

Yes, but only in isolation. Apple and Xiaomi rushed in to grab 20% and 17% of the total market, respectively. Neither company sold any wearables at all a year ago. All things considered, Fitbit's rapid growth failed to keep pace with the wearables market in general, which expanded by 223%. That lofty 24% market share is actually a reduction from 30% in the year-ago report. 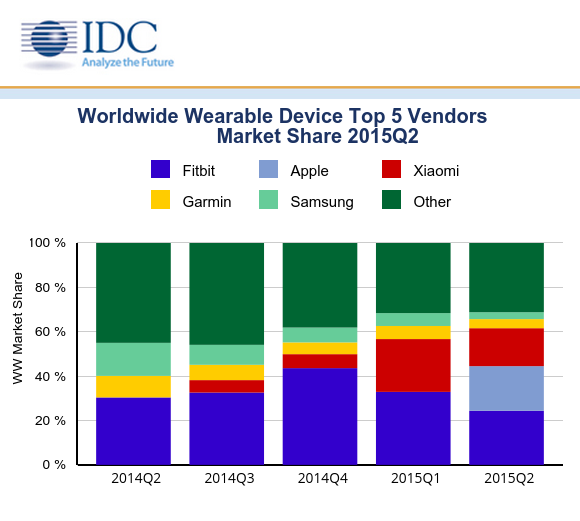 "The challenge for Fitbit moving forward is navigating the secular shift toward smart wearables," Evan wrote. That means adding premium features to its affordable fitness bands, in the hope of boosting profit margins and brand value. On the downside, as Evan noted, competing directly with Apple is a dangerous idea.

Some 45% of Fitbit's float was sold short in the middle of August, showing a large amount of investor skepticism. That short-sales ratio will probably drop sharply in the next report, since Fitbit shares have delivered on the negative bets lately.

The young stock trades at nosebleed-inducing valuations, not entirely supported by its fundamental growth rates. Stock prices have swung from $30 per share at the IPO in June, 2015, up to $51 per share in early August, and then back below $34 again. That's a lot of volatility across two months and change, and I have no idea where Fitbit shares will go next.

I'll be grabbing a bucket of popcorn to watch this stock from the sidelines for a while. Maybe you should, too.