According to comments made by Kinder Morgan Inc's (NYSE:KMI) founder Richard Kinder on the company's conference call last month, its stock was just stupid cheap. He took his own advice and bought more shares, forking over $3.5 million to buy another 100,000 shares of the stock.

While that's a drop in the bucket for him, it was still a statement. The stock then proceeded to get even cheaper as it continued to slide, falling double digits during the past month. 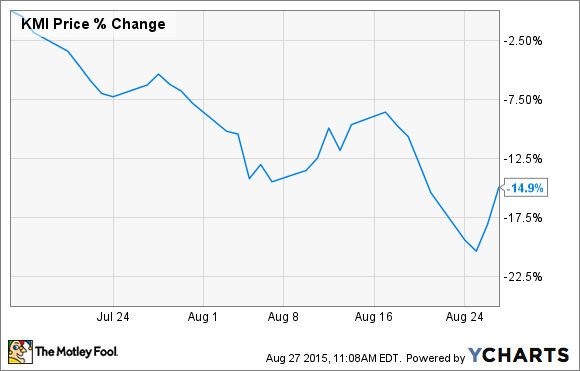 Now even I can't resist buying more shares, as I recently bolstered my overall position in the company by 50%. I just couldn't pass up the company's more than 6% dividend, which is firmly backed by fee-based contracts and a very strong project backlog that positions the company to grow the payout by 10% per year through 2020.

While oil and gas prices have been in a rut for a while, that doesn't have very much impact on Kinder Morgan's cash flow. That's because 96% of Kinder Morgan's cash flow this year is either fee-based, or hedged. As a result, the weakness in the price of oil and gas is having a minimal impact on its cash flow this year. In fact, at current commodity prices, the company is expected to generate more than $300 million in excess distributable cash flow after paying a dividend that's expected to be 15% higher than last year's payout.

Moreover, the company has a $22 billion project backlog that it expects to build during the next five years. About 90% of these projects are backed by fee-based assets, which will only further solidify its future cash flows. This is why Richard Kinder could confidently say on the company's second-quarter conference call that, despite the downturn in the energy market, the company still "expect[s] to grow our dividends by 10% each year from 2016 through 2020."

History of being a promise keeper
He's not just saying this because it's what investors want to hear; he's saying it because Kinder Morgan is a company that keeps its promises to shareholders. In fact, the company has a history of not just keeping its promises, but exceeding goals. As the following slide shows, it has exceeded dividend targets nearly every year, only missing its target once. 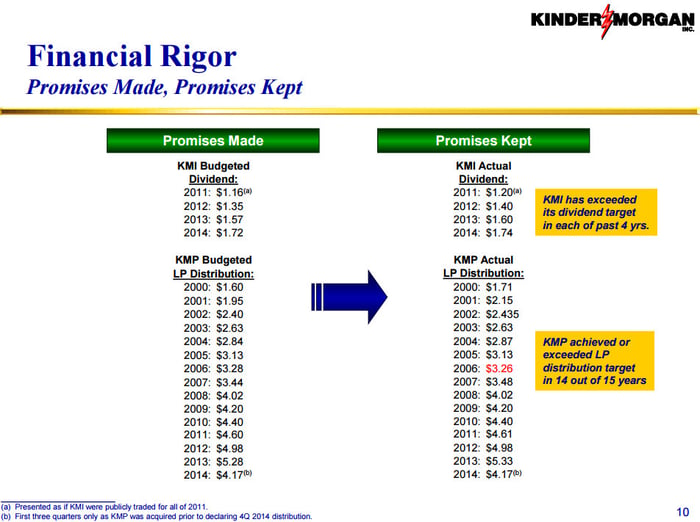 Because of this history, the odds are pretty good that it will continue to at least meet, if not exceed, its current plan to grow the dividend by 10% per year through 2020. This isn't a company that over promises only to under deliver; it's quite the opposite.

That's not to say that it will over deliver during the current environment, as it does face some headwinds from lower oil prices in its carbon dioxide segment. Further, some of its major growth projects could be delayed due to pressure from environmentalists and other groups, namely the Trans Mountain oil sands pipeline expansion in Canada, and the Northeast Energy Direct natural gas pipeline in New England.

However, the company has other levers to pull, like acquisitions that it can use to fill in the gaps between growth projects. It has done so in the past, and the chances are pretty good that it will continue to do so in the years ahead.

Investor takeaway
While I'm sure I didn't buy Kinder Morgan's stock at the bottom, I just couldn't resist the opportunity to buy more at these levels. Not only is its cash flow backed by rock-solid fee-based contracts, but its backlog is filled with more of the same.

Further, this is a company that has always not just kept its promises, but over delivered. I expect that to continue.