The price of oil has been on an absolute roller-coaster ride for more than a year. After years hovering over $100 per barrel, oil started a freefall last summer and didn't bottom out until earlier this year in the mid-$40s. It then rebounded sharply in the spring, hitting over $60 a barrel, before it recorrected over the summer and has recently touched new lows of less than $40 per barrel. 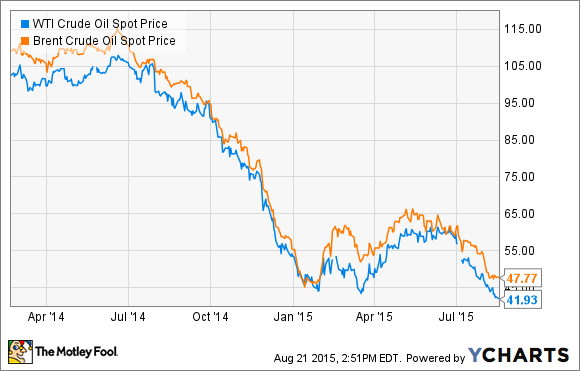 Given this wild ride, the question on everyone's mind is whether oil will keep going lower and stay there for a long period, or if it's poised for a sustainable rally. There are two sides to this debate, both with a compelling argument.

The bear case: lower for longer

Most on Wall Street are quite bearish on oil prices, with Goldman Sachs leading the "lower for longer" charge. In a research report earlier this month, the company said, "The rebalancing of supply and demand will likely prove to be far more difficult than what was previously priced into the market," and it added, "The risks remain substantially skewed to the downside." Further, it notes that even when supply and demand do balance, it might not necessary signal higher oil prices because of future supply headwinds coming from Iran as it comes off sanctions, not to mention the potential for increased OPEC production as its members offset weak prices by pumping out higher volumes.

A lot of oil companies echo these sentiments, with BP (NYSE:BP) among the most bearish. CEO Bob Dudley has said that "$100 a barrel was an aberration." Further, the company doesn't expect much near-term price appreciation, which is why it has positioned itself for a period where oil could remain lower for longer, as it views the current environment as a mirror of 1986, which began a long period of price weakness for the industry. It too believes that Iran could be a big drag on the price, which is why BP CFO Brian Gilvary recently said that "we haven't yet seen the full affect come through" of Iranian barrels, as they won't hit the market until next year.

The bull case: ready to rebound
While "lower for longer" is quickly becoming the widely held view in the industry, there are pockets of resistance, so to speak. Core Labs (NYSE:CLB), for example, wrote in its second-quarter earnings release, "The balancing of worldwide crude-oil markets is well under way. U.S. production started to decline in the second quarter of 2015, and the most recent International Energy Agency estimates project worldwide demand to increase in 2015 by 1,400,000 barrels of oil per day ("BOPD") in response to low commodity prices."

Given that backdrop, Core Labs' view is that U.S. production has already peaked and will fall by a half million barrels per day by year's end. Further, it anticipates second-half production declines around the world, outside OPEC. Hence its view: "In 2016, at current activity levels in North America, year-over-year production declines are expected in Canada and the U.S. while international production levels stagnate. The Company believes that recent downward production revisions in Mexico and offshore eastern South America confirm these views, which may lead to a sharp recovery in crude oil prices and industry activity levels." (Emphasis mine.)

Also holding the view that the oil market is rebalancing and that oil prices could be on the rise next year is EOG Resources (NYSE:EOG). CEO Bill Thomas reiterated a lot of what Core Labs wrote:

We really believe that in the second part of this year we are going to see some strong month-over-month decline rates. ... So our model shows what everybody is guiding that the U.S. will grow about 500,000 to 600,000 barrels a day this year versus the 1.2 million barrel a day last year. So there's a significant drop-off in the year-over-year growth rate. And then if the prices continue to stay low through the end of the year, we expect 2016 to have continued month-over-month decline rates in the U.S. And that will be joined by decline rates in other non-OPEC supply in 2016. And the combination of those things with the continued reasonable demand growth gives a decent opportunity for prices to be a bit better than they are right now in 2016. (Emphasis mine.)

Both Core Labs and EOG Resources hold the view that oil production in the U.S. is poised for a second-half decline and will be joined by international production declines in 2016, given the current investment rate in the industry. Against this backdrop is increased demand for oil from the lower prices. That's why EOG Resources' CEO said, "So our assessment is [that] there is more upside to the forward curve than downside," basically suggesting he sees oil prices going higher and not lower.

Investor takeaway
Here we have two polar-opposite views, with some really smart people on both sides of the debate. However, what's worth pointing out about the bull case is that it's primarily based on the natural decline rate of oil wells, instead of geopolitics, counting barrels, or historical references. That matters, because Core Labs knows more about what happens inside an oil reservoir than anyone else in the industry. Further, EOG Resources is pretty much the only oil company that has refused to grow its oil production in the current environment, because it has been banking on the decline rate to fix the oversupply problem. This is quite a different scenario from 1986, because shale is a much different reservoir that declines really rapidly. That's not to say oil won't go lower and stay there longer in the short term, but there's compelling evidence that the decline rate is starting to kick in, which could really kickstart the oil price over the next year.