Talk of user saturation has been tossed around for years, but the king of social media continues to command attention.

You don't have to look far to find an article or report predicting the decline of Facebook (FB 1.14%) due to user saturation, too many ads, or the loss of teen usage. And it's easy to see where the naysayers are coming from. After all, with just shy of 1.5 billion monthly average users, Facebook already counts about half the world's connected population as customers.

As it happens, not only is Facebook continuing to grow -- and it has plans in place to keep the MAU ball rolling – according to a recent report, it's never been more actively used than it is today. It's certainly important to demonstrate sheer volume as it relates to MAUs, as Twitter (TWTR 2.21%) shareholders recognize firsthand. Its lack of MAU growth -- up just 2 million active users sequentially last quarter -- is largely to blame for Twitter's lackluster share price of late.

But there's more to the MAU story than volume. Just as important as the number of users is their respective engagement levels. Another concern of Twitter investors are the hundreds of millions that visit the site monthly but don't actually use it, an often-repeated issue of Facebook naysayers.

We love our Facebook
Of the many positives investors could take from Facebook's second-quarter results, including surpassing the $4 billion revenue plateau for the first time, the aforementioned 1.49 billion MAUs and a 16% jump in non-GAAP (excluding one-time items) earnings per share, its engagement levels really impressed. 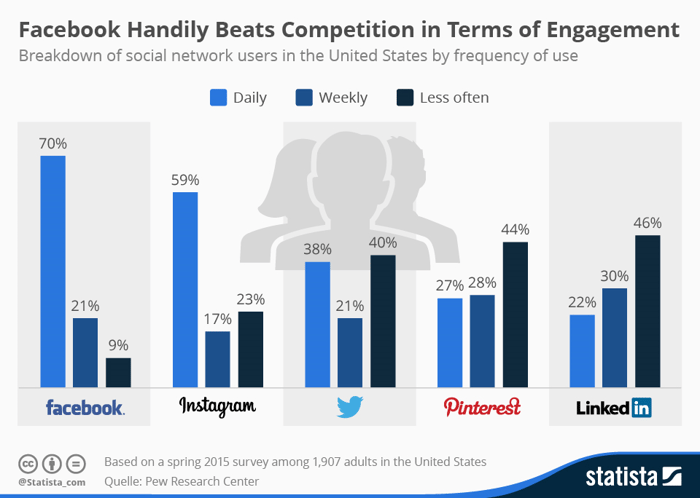 Monthly users are a legitimate measuring stick, and one used across the social media industry. But it's Facebook's continued rise in daily average users that stands out as the true test of just how engaged its "friends" are. Last quarter, the number of DAUs grew 17% compared to the year-ago period and now stands at 968 million. Imagine that; nearly a billion consumers around the world log onto Facebook every day. Even more impressive are the engagement figures here in the states.

According to new data from Pew Research, a whopping 72% of U.S. Internet users are on Facebook, and that number is even higher among 18- to 29-year-olds. In other words, the youngsters who were supposedly ditching Facebook for other sites like Pinterest or Twitter, not so much.

Now consider that the only social media site that comes close to Facebook as measured by engagement levels is its own Instagram property, and it's safe to say the mass exodus so many have predicted hasn't come to pass.

How'd they do that?
Incorporating high-priced video ads across the site means Facebook doesn't have to inundate users with spots to continue to grow revenues. Facebook fans may recall it was asking for a reported $1 million a day for the "privilege" of posting a video spot, which it intends to limit so that users won't see more than three in a given day. The increased use of video in general, as per Facebook COO Sheryl Sandberg, has also positively affected engagement levels.

Facebook's ability to target the right ad to the right person at the right time also plays an important role in the user experience -- it increases the chances all those DAUs see an ad of interest rather than whatever happens to pop up. If we're going to be subjected to advertising, it may as well be promoting something we're interested in.

Finally, Facebook is also pushing its Internet.org initiative to bring connectivity to the underserved masses around the world. While Internet.org won't necessarily help with engagement levels, it should appease investors with concerns about where Facebook's next 500 million MAUs will come from. And assuming it's able to deliver engagement results even close to what it has in the U.S. -- not only with MAUs continuing to grow -- the number of daily users will, too.