Please ensure Javascript is enabled for purposes of website accessibility
Log In Help Join The Motley Fool
Free Article Join Over 1 Million Premium Members And Get More In-Depth Stock Guidance and Research
By Mabel Nunez - Sep 1, 2015 at 7:49AM

Strong starter stocks to help your kids learn about investing.

I'm not a fan of buying children extravagant gifts or spending hundreds of dollars on toys or games. I am a huge believer, however, in gifts that lead to learning and have the power to keep on giving. That's why I'm a huge fan of gifting children stocks -- it is a great way to teach your children about the markets and encourage them to work toward financial independence from a young age.

It's even better if you can start with quality companies that they recognize and understand. With this in mind, three names to consider are Mondelez International (NASDAQ: MDLZ), Hershey (NYSE: HSY), and Disney (NYSE: DIS).

In the book You Can Be a Stock Market Genius, Joel Greenblatt mentions spinoffs as a favorable event that throughout history have delivered healthy profits to shareholders. Mondelez, following its October 2012 split from Kraft Foods -- now Kraft Heinz (NASDAQ: KHC) -- has been no exception. The stock price has increased more than 60% since its debut as a stand-alone company. And that return doesn't even factor in the added income provided by the company's tidy 1.5% dividend yield.

Mondelez has a portfolio of highly successful products, including nine billion-dollar brands. Its most profitable unit is the biscuit division, which accounted for 33.6% of global net revenue in fiscal 2014. The division includes highly popular brands such as Oreos, Chips Ahoy!, Nutter Butter, and Cadbury Chocolate.

There are no guarantees in the stock market, but management is positioning itself to ensure consistent growth for years to come. One of the most notable initiatives has been the 2014-2018 restructuring program, which aims to improve operations across all divisions and increase profit margins by incorporating efficient work processes, including lowering overhead costs and supply chain cost reductions. Although the program comes with a hefty price tag of $3.5 billion up-front investments, the end goal appears quite promising. The company recently reaffirmed its outlook to deliver $3 billion in gross productivity savings, $1.5 billion in net productivity, and $1 billion in incremental cash flow over the next three years.

Speculations that Mondelez would be a possible acquisition target for Kraft Heinz emerged recently, after activist investor Bill Ackman took a $5.5 billion stake in the company. But for his part, Berkshire Hathaway's Warren Buffett said during a recent statement that acquiring Mondelez isn't in his plans .

Hershey
Hershey has been around since 1894 and still growing as a solid leader in its industry. As per their 2014 annual report, the U.S business increased its overall Candy, Mint, and Gum category -- or CMG -- market share to 31.4%, a year over year increase of 0.3 share points. In their March 2015 letter to shareholders, CEO John Bilbrey confirmed:

"We outperformed our confectionery peers, gaining market share in the United States and in our focus markets around the world."

Companies like Hershey are probably the prime example of a hedging mechanism for market downturns -- the type of company that institutional investors flock to in the face of adversity. Just to demonstrate, notice this interesting phenomenon during the dot-com bubble of the early 2000s: Instead of crashing with the rest of the market, the stock catapulted to new heights. 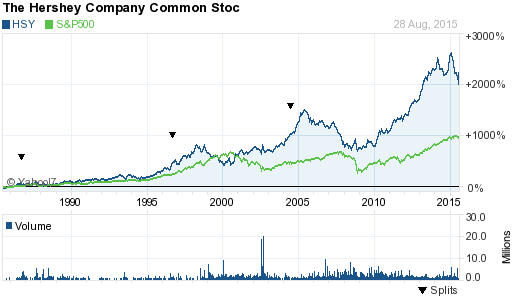 Not only that, but the company also continued paying and increasing its dividend, which currently stands at a 2.6% annual yield. Although the stock did sink around 29% during the housing bubble of 2008-2009, it soon recovered and is up well over 100% from its low during those times.

Similar to Mondelez, Hershey is also working hard to position itself as the leader that keeps on giving. Its "Next Century" project, which wrapped up in fiscal 2014, sought to improve the supply chain and streamline operations by cutting costs and increasing efficiency. Although it came with some hefty costs, including expenses of $110 million for project implementation and around $300 million in capital expenditures, annual savings are expected to be between $60 million and $80 million per year starting in fiscal 2015.

Disney
Disney is more than amusement parks. It's created an empire of well-diversified and highly profitable products and services. With its hands in pretty much everything from TV networks to consumer products, Disney has mastered the art of profitable growth without losing steam.

The factors that make Disney a strong value play include incomparable brand power, multiple sources of income, and strong pricing power. Disney raised its admission in fiscal 2014 to an average of $100 per ticket across all parks in North America, yet the parks saw a boost in attendance.

Although revenue in international parks still remains a bit sluggish, with lower attendance and lower revenue resulting from higher costs in places such as Hong Kong, the company still reported a nice boost overall. Parks revenue rose 4% year over year, bringing revenue in the segment to $4.1 billion. If that's not consumer loyalty and love for the Disney experience, I don't know what is.

Disney's stock price has risen over 300% (accounting for splits) over the past decade. And let's not forget the 1.30% dividend yield which the company currently pays and has been increasing every year since 2011.

But how do we determine whether the growth and profitability are sustainable? Well, we can

Looking forward, there are several projects in the works that should prove to be major growth catalysts, namely a new park opening in Shanghai and the debut of the new Star Wars movie. And we can't forget the value of its brands and the characters it owns. Mickey Mouse isn't going anywhere.

Disney has also shown itself to be adaptable to disruptions in the media industry. Media networks, Disney's largest segment, includes ESPN and ABC. ESPN remains a leader in its class despite a changing cable-TV environment. In a recent press conference, CEO Bob Iger said that ESPN could split off into its own stand-alone network, similar to HBO, and still be OK. "We could do it today," he said, "and I guarantee there would be enough people willing to pay."

Disney is also a part-owner of streaming service Hulu, which will help it ride out the coming changes in the industry. In the meantime, the media networks unit still grew by 5% year over year.

The Foolish bottom line
While your child may not necessarily jump for joy over getting a stock instead of a hot new toy, try to think about your child's reaction 20 or 30 years from now, as they witness the power of compounding in action. Not only can your kids benefit from stock-price appreciation over time, but they'll also enjoy a nice dividend boost from any of these stocks.

Once you set up a portfolio for your child, make sure you keep an eye on the stocks' performance to make sure they're meeting the goals you've set. Encourage your child to participate in this activity and take the opportunity to teach them incredibly valuable financial skills -- from understanding financial statements to deciphering information in annual reports and press releases.

Unless there are some significant disruptions or changes, I'd let the portfolio ride its course until your children are of age and can decide for themselves what to do with their shares. The point of being a part-owner in great companies is the advantage of growing with the company year after year and benefiting from that growth. Your kids will thank you.