Yesterday closed the worst month of August for stocks in 14 years. So what?

But this says more about the myopia of the financial press than the gravity of the situation for long-term investors (traders are another matter, particularly those who are leveraged).

It's true that, as months of August go, last month was pretty awful. With a loss of 6.3% for the S&P 500 (excluding dividends), August 2015 posted the sixth-worst performance for a month of August since 1950. The five instances that exhibited a worse performance are all associated with a bear market or a specific negative event:

Let's put that in context: If the last 66 years are representative, you should expect to experience a month of August that is as bad or worse every 11 years (the ratios 1:11 and 6:66 are equal).

Are the months of August really that special that we can only compare them among themselves? Once you extend your field of comparison to the entire calendar, things look worse still: August 2015 was in the bottom fifth percentile going back to Feb. 1950 (it turns out that August is one of the most volatile months in the calendar).

If your time horizon is equity-appropriate (10 years, at a minimum), and you're currently a net buyer of stocks, the answer is no.

Stocks are volatile -- that's one of the reasons you expect to earn a higher return from them than bonds. Furthermore, equities are a long-duration asset (longer than most bonds), so it makes no sense whatsoever to fixate on a single month's performance (or even a single year, for that matter).

Jason Zweig is one of the few financial journalists worth reading. Today, he tweeted a timely graphical reminder of the magnitude by which long-term returns dominate short-term volatility:

For many people the pain is real, but can you spot the 2015 "correction"? #WSJ pic.twitter.com/s2N3vF6z0C

The picture of the linked chart is a bit small, so I've reproduced a similar one below. This is a long-term chart of the S&P 500, on a logarithmic scale: 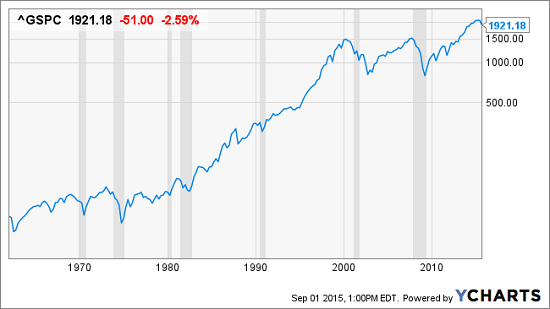 Sort of puts things in perspective, doesn't it?