If you do the math, it isn't unreasonable to think that Citigroup's dividend could increase by a factor of 10 over the next decade. The most promising big bank dividend stock probably isn't the one that comes immediately to mind. It isn't Wells Fargo or JPMorgan Chase, longtime dividend stalwarts. In my opinion, it's Citigroup (C -0.06%).

I'll be the first to admit that this doesn't square with current dividend metrics. Over the last 12 months, Citigroup has paid out only $0.07 per share in dividends. Meanwhile, even smaller banks such as Capital One and State Street have distributed more than $1 per share over the same period.

The same story is told by Citigroup's payout ratio, which measures how much of a bank's earnings are distributed to shareholders via dividends. Most banks strive to pay out a third of their earnings to investors, leaving the remaining two-thirds to be split between retained earnings and stock buybacks.

If you exclude Citigroup, the 14 largest banks in America paid out an average of 34.9% of their earnings over the past year. Citigroup, by contrast, paid out only 6.7%.

The reason Citigroup's dividend pales in comparison to its counterparts is because it had to slash its quarterly distribution during the financial crisis of 2008-2009. Going into the crisis, shareholders in the then-biggest bank in America received nearly $5.50 per share each quarter. Since then, it's fallen to $0.05. 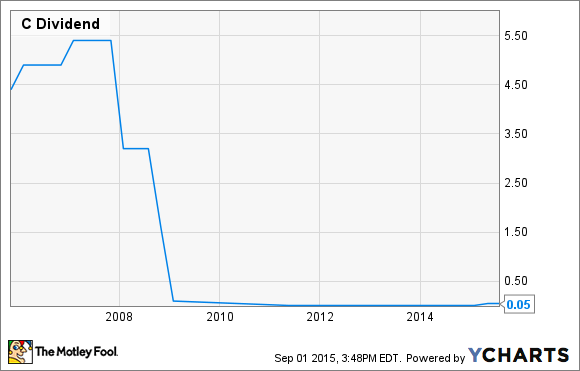 In the wake of the crisis, moreover, while banks like Wells Fargo and JPMorgan Chase have repeatedly been given the go-ahead from the Federal Reserve to ratchet up their payouts, Citigroup has either declined to request or been refused permission to do so in all but one year. The lone exception was 2015, when the Fed approved the New York City-based bank's proposal to increase its quarterly payout from $0.01 per share to $0.05 per share.

It's for this reason that Citigroup is the most promising big bank dividend stock in the market today. At some point, it will fully recover from the financial crisis. And when it does, it's reasonable to assume that its annual net income will equate to 12% or more of its shareholders' equity, which serves as a rough profitability benchmark for banks that aren't saddled with toxic assets, as Citigroup has been since 2008.

When that happens, and I believe it's only a matter of time, Citigroup's after-tax earnings would be upwards of $18.5 billion. Assuming a 33% payout ratio, that equates to $6.1 billion in annual dividends compared to only $212 million over the past 12 months. On a per-share basis, that translates into approximately $2 per share per year, compared to the current run rate of $0.20 per share.

It isn't unreasonable, then, to think that Citigroup's dividend could increase by a factor of 10 over the next decade. Many other banks have room to grow their dividends as well, including its better-heeled competitors Wells Fargo and JPMorgan Chase, but none comes anywhere close to Citigroup in terms of this potential.