With the markets in a correction, it's a great time to go shopping for bargains.

The stock market has been beaten down lately, with major indices at or near correction levels, and bank stocks have not been immune from the pain. Even after the recent rebound, the financial sector is down more than 8% since peaking in late July.

With that in mind, we asked four of our analysts to share their top bargains in banking. Here's what they had to say. 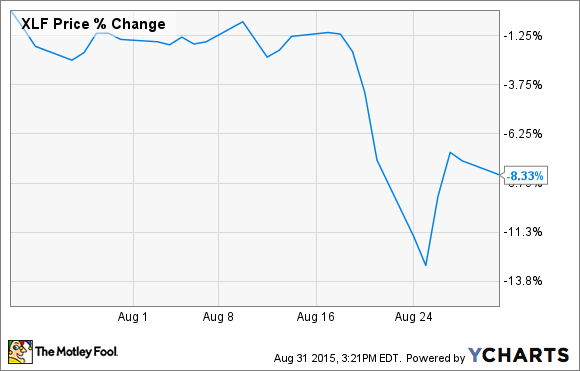 Matt Frankel: If this correction continues, one bank stock I'll consider buying more of is Bank of America (BAC 2.32%). After the bank's atrocious performance during the financial crisis, it may seem like a silly idea to buy more if things start to go bad. So, why on Earth would I suggest it?

Simply put, Bank of America is a different bank than it was just a few years ago. Its credit rating was recently upgraded by all three major rating agencies, which could potentially save the bank billions of dollars in borrowing expenses each year. The majority of crisis-era legal expenses are in the past, and a recent legal decision actually trimmed $7.6 billion from the bank's outstanding legal costs. Further, the bank is finally producing profits in the realm of what investors expect from big banks -- its 0.99% return on assets (ROA) for the second quarter is just shy of the coveted 1% level.

Finally, the bank has projected that its net interest income could grow by $4.6 billion once interest rates normalize.

Bank of America trades for a 24% discount to book value, which makes it extremely cheap already, and analysts are expecting it to produce 2015 earnings of $1.61 per share -- its best performance since before the financial crisis. So, it could be an excellent time to pick up cheap shares of this much-improved banking giant.

Todd Campbell: The last thing you want to do during tough economic times is boost your exposure to banks with loans likely to default. Instead, focusing on banks like New York Community Bancorp (NYCB 2.38%) that have loan portfolios more insulated to economic busts is best when markets sour.

New York Community Bancorp generates the vast majority of its revenue and profit from loans issued to multifamily apartment projects in New York City, and many of these loans are for rent-controlled apartments that typically see an uptick in demand during a recession. As a result, during the four years surrounding the Great Recession, the net charge-off rate for New York Community Bancorp's loans was a meager 37 basis points, and that was miles better than the 8.03% charge-off rate at its savings and loans peers.

Additionally, Because New York Community Bancorp focuses on big loans rather than pricey branch offices, it has fewer expenses and more money to return to investors via dividends than peers. With a rock-solid loan portfolio that could hold up during a slide and a healthy 6% dividend yield, you can see why this my favorite bank to own in a correction.

Sean Williams: You'll be hard-pressed to find protection from a correction in the financial sector, but if my arm were twisted, I'd suggest investors take a closer look at U.S. Bancorp (USB 1.86%).

The selection is a bit odd if you think about it, because U.S. Bancorp is the most expensive of the big banks by price-to-book value. But, as my Foolish colleague John Maxfield recently pointed out, there is a direct and reasonable correlation between valuations and profitability among bank investors. U.S. Bancorp has the highest return on equity over the trailing-12-month period than any other big bank, making it a solid choice to be the sector's "most expensive" on a book value basis.

One reason U.S. Bancorp remains a leader, and has been one of the strongest performers since the Great Recession, is its keen ability to avoid risky investments. U.S. Bancorp was never lured in by derivatives and other trades that crashed and burned for some of its peers. Instead, U.S. Bancorp focuses on simple loan and deposit growth, as well as improving its image with consumers (something that hasn't been hard since it's kept its name out of the headlines).

U.S. Bancorp's second-quarter results echo its focus on basic banking services. Average total loans increased 4%, trust and investment management fees rose better than 7%, average total deposits increased nearly 9%, and net charge-offs and nonperforming assets both fell by a double-digit percentage on a year-over-year basis. Tack on a reasonable 2.3% dividend yield, and you have ample positives that could buoy this stock.

Jason Hall: Over the past few decades, there have been several banking crises, and the only major bank to have come through each of them unscathed has been Wells Fargo & Co (WFC 3.35%). The latest banking crisis, of course, was at the very heart of the Great Recession, and it saw many banks -- big and small -- collapse.

Wells did end up taking on some government capital as part of the bank "bailout" funds program in October 2008, but by December 2009, it had already repaid the $25 billion in federal assistance with minimal impact to shareholders.

Most importantly, Wells was able to not only navigate the biggest banking crisis in nearly 30 years relatively unscathed, but came out of it bigger and stronger by acquiring Wachovia in 2008, significantly increasing its presence in the eastern U.S.

The bottom line about bank investing is that a proven track record of low-risk lending, and a management culture that fosters and rewards that behavior, is more important than chasing profits or growth. Wells Fargo has for years been an excellent bank -- and a dependable investment -- for this very reason. I can't think of another bank I'd rather buy in a market correction.