Please ensure Javascript is enabled for purposes of website accessibility
Log In Help Join The Motley Fool
Free Article Join Over 1 Million Premium Members And Get More In-Depth Stock Guidance and Research
By Daniel Sparks - Sep 2, 2015 at 8:03AM

These days, talk about electric-car maker Tesla Motors (TSLA 8.25%) is focused mostly on a single topic: Model X. There's good reason for this, the first deliveries of the SUV are due by the end of next month. Even more, the company is essentially betting Model X can eventually double its sales volume. But some investors may be worried about Model S cannibalization. After all, if Tesla's Model X is as good as CEO Elon Musk is letting on, wouldn't most people ordering a Tesla prefer the extra space in the Model X?

Cannibalization? Yes. Peak demand for Model S? No.
Consider this: What if both cannibalization and sales doubling were to occur?

How could Tesla's sales volume double even with significant cannibalization of Model S? Demand for Model S would have to continue to grow higher than current levels. Fortunately, for Tesla investors, there are plenty of reasons for this to happen. Here are four reasons demand for Model S hasn't peaked.

1. Demand in non-U.S. markets is still ramping up. Strong demand for Model S looks like it is poised to carry over into every market Tesla enters. While some markets will take longer than others, this is an undeniable long-term growth opportunity for Model S sales.

2. There's still potential for sales growth in the U.S. While the U.S. is clearly Tesla's strongest market today, this doesn't mean it has exhausted all of its sales growth in the market. Indeed, even in Tesla's most recent quarter there were signs of domestic strength. U.S. orders were up 30%, year over year, in the U.S., Tesla said.

Further, Tesla's retail footprint, even in the U.S., is more limited than some might realize. While the company undoubtedly has strong penetration in California, the electric-car maker hasn't been very aggressive with tackling a handful of other key markets. The East Coast and the Midwest, for instance, could benefit from more Tesla stores. The best way to view Tesla's underpenetrated U.S. markets is to look at a map of the company's current retail stores and galleries. 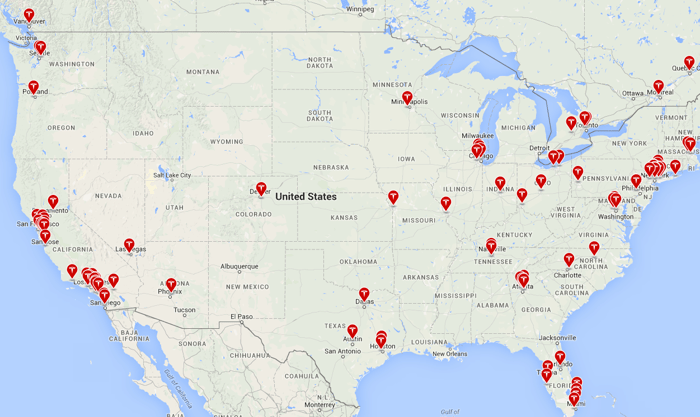 3. Available levers for demand generation. Yet to spend a penny on advertising, and with the company's only discount for Model S to-date taking the form of a referral program, Tesla has levers at its disposal to generate more demand -- promoted video ads on Facebook and YouTube and TV commercials being perhaps the most notable mediums for demand generation Tesla hasn't yet tapped into.

Given the extensive consumer education and convincing required to sway a buyer from a gas car to a fully electric car, paid advertising could be an excellent demand driver for Tesla -- and it's proven to work for other automakers time and time again.

Tesla could pull levers like these if demand begins to get soft.

4. Updates to Model S. Investors aren't the only ones thinking about potential cannibalization of Model S when Model X is launched. You can bet Tesla's executive team is thinking about it, too. This is why it's likely that as soon as Model S demand begins to slow, the company could be planning to bring significant updates to the sedan in order for it to remain compelling next to Model X.

Major updates for Model S wouldn't be anything new for Tesla. Since it initially launched Model S, the zero-to-60 time for its flagship version of the car increased from 417 to 762 horsepower, and maximum range increased from 265 to about 286 miles. And the company also added a dual-motor all-wheel drive option, as a well as cameras and sensors equipped to provide industry-leading autopilot features, including the ability for hand- and foot-free driving at highway-way speeds (assuming Tesla follows through with its promise to provide this feature through an over-the-air update).

Longer-term, of course, Tesla could completely redesign the appearance of Model S. When asked during a recent Tesla conference call about whether Tesla is considering a potential redesign for the Model S, Musk refused to comment.

5. Competition. If Tesla's success with Model S to-date in a no-advertising environment is any indication of the continued word-of-mouth demand generation potential from having a growing number of fully electric cars in the road, it's possible that electrified competition with 200 plus-miles of range could be a boon for Tesla. How? Formidable competition could solicit more incremental demand for Tesla-like electric vehicles as an entire category than the number of customers swayed away from buying a Tesla for a competing alternative.

Of course, there are certainly road bumps, detours, and even some worst-case scenarios that could arise -- public relations missteps, recalls, or worse-than-expected demand for fully electric vehicles as an entire category, for instance. But with five solid reasons to believe Model S sales haven't peaked, Tesla's prediction for the model's sales to continue to grow 50% annually into 2015 (even with a Model X launch) certainly doesn't sound impossible.