Based on a recent study, Big Blue’s data analytic solutions are not only wanted by big business, they're needed.

It's been over four years since IBM's (IBM 1.31%) cognitive computing wonder Watson trounced two of Jeopardy's top winners. At the time, Watson was a novel concept to say the least, and maybe a peek into the future of "machine learning," but it seemed a far-flung notion that IBM would actually generate any significant revenue from its computing wonder anytime soon.

Fast-forward a few years, and not only has IBM monetized Watson, it's gone all in. After investing $1 billion to create a separate Watson business division, the new-ish unit has since spent billions more on strategic acquisitions, including the recent $1 billion deal for Merge Healthcare as part of its Watson Health initiative. And according to some new data, IBM's focus on analytics and big data -- a compilation of information from multiple sources -- are exactly what big business needs.

A world of potential
Estimates vary, but according to research from IDC, the market for big data-related analytics and services will skyrocket to $125 billion in 2015, and that's just scratching the surface of what is expected to become an even larger opportunity in the years to come.

The high expectations surrounding big data are due, in large part, to the proliferation of the Internet of Things, or IoT. As the world around us becomes increasingly "connected" -- our homes, cars and even cities -- the sheer volume of available data is quickly becoming overwhelming: and that's where solutions like IBM's Watson and one of its primary competitors, Microsoft (MSFT 2.19%), with its Hadoop, Power BI (business intelligence) and artificial intelligence product suite, enter the picture.

Sometimes overlooked in the discussion of the burgeoning IoT market is data. Predictions of IoT-related device sales tend to get the headlines, but the real value lies in collecting, collating, analyzing, and ultimately utilizing all that information, much of which is stored in the cloud. Not surprisingly, personalized marketing efforts -- based on assimilating consumer data to develop "profiles" -- have the highest engagement and response rates, which is what marketing departments pay for.

The problem is, even in these early days of IoT and big data, large companies are already facing a dilemma: what to do with all that information?

Survey says
A study was conducted a few months ago asking both U.S. and U.K. business execs what challenges they're facing as it relates to big data. Concerns with integrating multiple data sources into a seamless, easy-to-use platform were high on the list, particularly for larger companies.

But the No. 1 challenge for analytics execs in companies with more than 500 employees -- cited by 60% of the respondents -- was the "large amount of data." As it stands, there is simply too much information for traditional legacy systems to analyze and develop actionable results. Another 53% of the business analytics folks are challenged with finding analytics experts to ensure they derive the most value out of the data as possible. 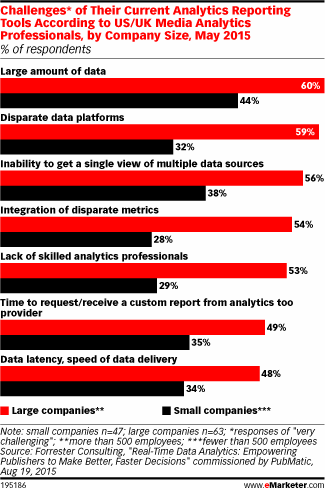 Filling the void
Though not quite at Microsoft's more than $8 billion annual revenue run rate, IBM's cloud results are nothing to sneeze at. Last quarter was another in a long line of earnings announcements in which IBM enjoyed significant cloud-related revenue growth. Up over 50% "as reported," and over 70% after removing the effects of currency exchange rates and one-time items, IBM is now tracking at a $4.5 billion annual run rate. And the cloud is where much of big data is, and will continue to be, housed.

Of course, Microsoft CEO Satya Nadella has been focused on his "cloud-first" transition for some time. But when it comes to big data, analytics and cognitive computing, IBM's Watson and its BI efforts are leading the charge. Unfortunately, IBM doesn't break out Watson-specific sales, but its BI unit jumped over 20% last quarter, sans currency headwinds.

The big data challenges businesses are already facing this early in the IoT growth curve beg for solutions like IBM's Watson. Yes, many investors continue to point to the declining PC market and IBM's poor hardware sales as reasons to be bearish, but that's a near-term perspective. Over the long haul, IBM is positioned to solve one of big businesses most pressing concerns: what to do with all this data.