Please ensure Javascript is enabled for purposes of website accessibility
Log In Help Join The Motley Fool
Free Article Join Over 1 Million Premium Members And Get More In-Depth Stock Guidance and Research
By Daniel B. Kline - Sep 2, 2015 at 6:44PM

After a strong start to the year, the restaurant/arcade/sports bar chain had a surprisingly bad month in tandem with a rocky market overall.

For the period, which ended on May 3, the company also reported an increase in comparable-store sales of 9.9%, up from 4.7% in last year's first quarter. As a result, its revenue forecast for the fiscal year was raised from $822 million to $831 million and its same-store sales guidance increased to 4%-5% from 3%-4%.

In a broad sense, the first-quarter report in early June was very good news, which makes it surprising that the company posted a drop of more than 10% in August, according to S&P Capital IQ data. 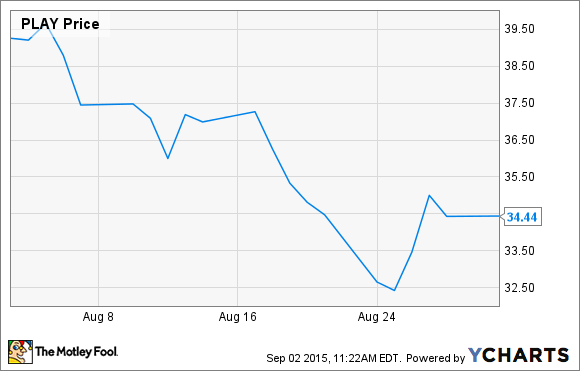 So what: August for Dave & Buster's was a peculiar month, where nothing happened that should have sent its stock spiraling. Restaurants are particularly vulnerable to weather problems, but the month did not include any significant events that would have affected store traffic.

In this case, the restaurant/arcade chain appears to have been caught up in general market trends. Overall, restaurants had a bad August, falling more than 6% on average, according to the Nation's Restraurant News Index. For Dave & Buster's, this seems like a pullback due to the dicey overall market. That makes sense when you consider the chain has gained over 100% in the past 12 months and remains up nearly 9% for the past three.

Dropping more than 10% looks bad, but it's likely just profit takers and people spooked by what was a volatile month.

Now what: Dave & Buster's reports its second-quarter results on Sept. 8 and hitting its revised numbers will likely calm any nerves. The company also has an extensive new marketing campaign going on that attempts to brand the chain's locations as sports bars more than past ads, which pushed them as family spots that also had a bar.

It's a subtle shift timed for the start of football season, which makes sense because the fall season is full of major sporting events and kids are back in school, making families a less viable audience during the week. Whether consumers embrace this change (which is a shift in marketing, not an in-store revamp) will play a major factor in how the company performs going forward.