Please ensure Javascript is enabled for purposes of website accessibility
Log In Help Join The Motley Fool
Free Article Join Over 1 Million Premium Members And Get More In-Depth Stock Guidance and Research
By Ashraf Eassa - Sep 3, 2015 at 8:00AM

NVIDIA is the leader in high-performance computing accelerators, but Intel is quickly becoming a credible force in this market.

Although NVIDIA's (NVDA 1.10%) high-performance graphics processors are generally designed for gaming, these chips can also be used for computationally intensive applications outside of games. For years, NVIDIA has sold graphics processors under the "Tesla" brand into supercomputers, servers, and professional workstations to accelerate certain compute-intensive workloads.

During NVIDIA's fiscal year 2015, the company's "HPC and Cloud" business -- which probably consists primarily of sales of Tesla accelerators -- was $279 million, growing about 52% year over year. This is an impressive growth rate, albeit off of a fairly small base.

However, despite the fact that Tesla has been a success story for NVIDIA, there is one potential threat to this business that NVIDIA investors should keep a close eye on -- Intel's (INTC -0.80%) Xeon Phi.

Some background on Xeon Phi
Like NVIDIA's Tesla, Intel's Xeon Phi is designed to handle very computationally intensive workloads in a faster, more efficient manner than traditional CPUs. Although NVIDIA's Tesla is essentially a graphics processor being used for non-graphics computational tasks, the Xeon Phi is made up of a bunch of relatively low-performance general purpose processors coupled to high-performance vector processors suited for computationally intensive tasks.

Further, although Intel claims that Xeon Phi's compatibility with the traditional x86 instruction set is a valuable asset in terms of attracting developers, NVIDIA's incumbent position in the accelerator market probably dulls that potential advantage for Intel.

Intel, however, might be set to gain an edge on NVIDIA with its upcoming Knights Landing processors for high-performance computing.

Another interesting thing about the upcoming Knights Landing chip is that Intel will be offering it as a stand-alone CPU as well as a co-processor connected over the PCI Express bus. The stand-alone CPU version, according to Intel, should deliver more than 25% better power efficiency relative to the add-in-board variant.

NVIDIA will surely respond, but Intel may still gain additional share
I expect that NVIDIA will respond to Knights Landing with Tesla co-processors based on its upcoming "Pascal" architecture sometime next year. And, frankly, I expect that NVIDIA's upcoming Pascal-based Tesla parts will still offer better performance in many key high performance computing applications than Knights Landing will.

However, according to a recent Intel presentation, the company has been able to capture approximately 25% of accelerator unit share with its older Knights Corner product, growing its share pretty substantially from 2012 levels. 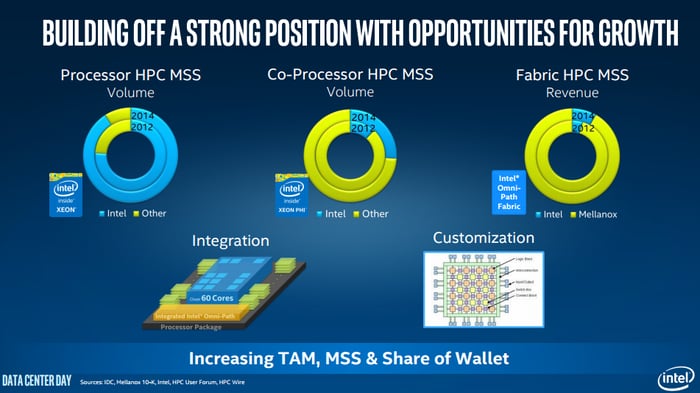 Although I suspect that the next generation Tesla parts will offer more performance than Knights Landing, I think that the competitive gap between next year's Tesla accelerators and Xeon Phi will shrink.

Further, the ability to run Knights Landing as a stand-alone processor will probably help bolster the value proposition of Intel's Xeon Phi offerings (although it can get tricky to call market segment share shifts because Xeon Phi in socketed form is no longer a co-processor; it's a full-fledged processor).

All told, while I expect NVIDIA to continue to do well with its Tesla lineup of products, particularly as the market for high performance computing continues to grow nicely, I believe that Intel stands a good chance of gaining additional market segment share from here.