Please ensure Javascript is enabled for purposes of website accessibility
Log In Help Join The Motley Fool
Free Article Join Over 1 Million Premium Members And Get More In-Depth Stock Guidance and Research
By Tyler Crowe - Sep 3, 2015 at 7:55AM

Less-than-expected earnings during slumping oil prices will add up to some big share-price declines, but that doesn't mean you should write off Emerge Energy Services just yet.

What: Shares of Emerge Energy Services (NYSE: EMES) have had a tumultuous ride over the past year. In August, Emerge's stock declined more than 15%, which almost seems like giving a dead horse a couple extra kicks as the stock is down almost 90% over the past year.

So what: Any company that is even tangentially related to oil and gas prices has taken a huge hit over the past month as oil prices dropped back into the $40-$45/barrel range. As a company that supplies oil and gas producers with sand for hydraulic fracturing jobs, the decline means less drilling and, in turn, less sand demand. This has been a -- if not the -- reason that Emerge's stock has gone nowhere but down over the past year or so. According to the Baker Hughes rig count, total rigs drilling in the U.S. are almost half what they were this time last year. 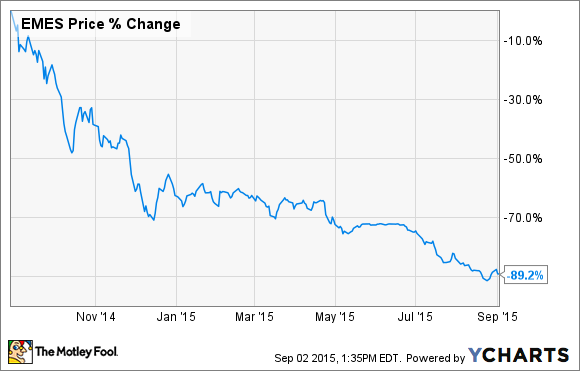 Emerge didn't exactly help its case in August, either, as the company wasn't able to meet Wall Street's revenue or earnings estimates for the last quarter. To be fair to Emerge, though, its total sand volumes declined 25%, which is considerably less than the 50% decline in rig counts we have seen over the past year, which suggests that sand demand is staying a little bit stronger than other oil and gas service sectors.

Now what: Despite the huge declines in Emerge's stock price and the waning demand for Emerge's frac sand, the company has been able to maintain some level of profitability. This past quarter, it generated $13.5 million in distributable cash flow, which will allow it to still make distributions to unitholders. If the company is still able to generate some level of profitability in this less-than-ideal market, it suggests that Emerge has the financial strength to ride out the low demand for sand for quite some time.

With shares trading this low, a company that is still generating some level of profitability in today's oil and gas market and the added bonus of a distribution that is designed to not break the bank suggest that perhaps Emerge is undervalued and worth another look.