Please ensure Javascript is enabled for purposes of website accessibility
Log In Help Join The Motley Fool
Free Article Join Over 1 Million Premium Members And Get More In-Depth Stock Guidance and Research
By Tyler Crowe - Sep 3, 2015 at 10:45AM

What: Shares of Sandridge Permian Trust (PER) declined more than 25% in the month of August on declining oil prices as well as declining production from the underlying properties that pay royalties to the trust, which were reported in the trust's quarterly results this past month.

So What: Much like an oil and gas ETF, the price of oil and gas are pretty much the only determinants of a royalty trust's prospects. So as the price of oil and gas have declined, so too have revenue to the trust and the dividend payments to the trust's shareholders. This past quarter got quite a bit of relief, though, as Sandridge Permian Trust had a majority of its production for the quarter hedged at higher prices. In fact, thanks to hedges, the acreage realized price for a barrel of oil this past quarter was greater than the same quarter in 2014. 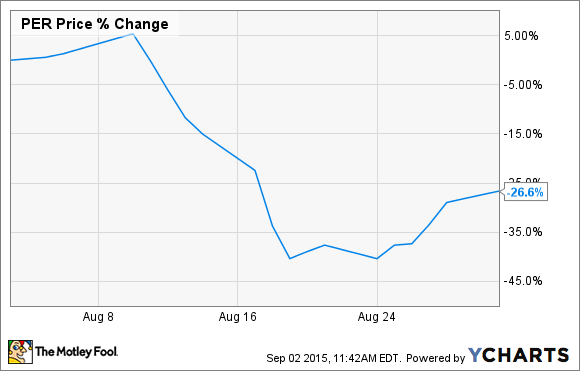 PER data by YCharts

These higher prices were not quite enough to make up for the declining production on the trust's properties, though. Production attributable to the trust declined 17% compared to this time last year to just 3,300 barrels of oil equivalent per day. At these kinds of decline rates, it won't take long before the property runs out of steam.

Now What: The greater than 50% dividend yield that the Sandridge Permian Trust is sporting today makes it look like an interesting investment. Before jumping into this royalty trust, though, there are a few things to keep in mind. First, that hedging protection on production isn't slated to last very long, so as those derivative contracts get used up the trust will be exposed to current oil and gas prices. Had that been the case this past quarter, then distributions would have been less than half what they actually were.

Also, since the operator of this trust has fulfilled all of the drilling obligations under the covenants of the trust, production from the trust's properties will remain in perpetual decline from here on out, meaning that you are pretty much ensured a smaller and smaller quarterly payment. Finally, to add insult to injury, now that all of the drilling obligations have been filled, all subordinated shares in the trust will start to act as common shares on January 1, 2016 and will not receive a smaller dividend as they have before, even further declining the average quarterly payout that common units would be eligible to receive. Adding all these things up, Sandridge Permian Trust is simply a royalty stock to avoid.

Is Sandridge Permian Trust Worth a Long-Term Investment?