What do a top forestry REIT, a Canadian bank, and a big chemical company have in common? They all made their shareholders incrementally richer last week.

Summer's winding down, but luckily, some companies are still bestowing a little sunshine on their investors. A small but active group of stocks raised their dividends last week.

As with previous weeks, they are an eclectic bunch. One isn't even a native of this country. Read on for more of our three chosen lifters for this installment of our series.

Weyerhaeuser (WY -2.89%)
Into the woods we go for our first raiser, this storied lumber/paper products real estate investment trust. Weyerhaueser has increased its quarterly dividend by nearly 7% to $0.31 per share.

The REIT is a sturdy and reliable dividend payer, handing out a distribution every quarter for many years running. Since the financial crisis year of 2009, when it slashed the payout by a gut-wrenching 80%, it's managed to grow it steadily from $0.05 to the present level.

The company had a tough Q2, with a delayed spring building season cutting deeply into results. Net sales were down 8% on a year-over-year basis to $1.8 billion, while the attributable bottom line cratered 53% to $133 million. Not surprisingly, the stock price has struggled to tread water so far this year. 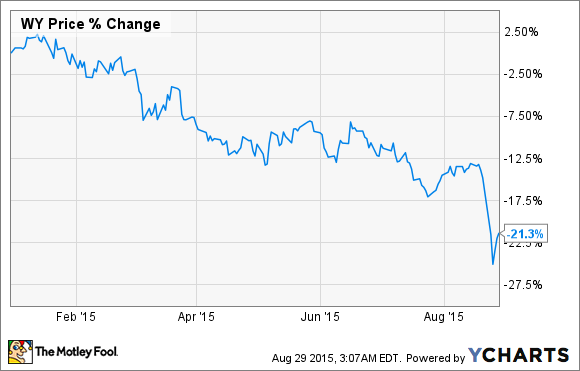 It's got more potential than that. U.S. housing construction is on an upswing, that late start aside, and Weyerhaeuser is well positioned to benefit from this. Additionally, in its guidance for Q3, the company said it expects "significantly higher" earnings from its key cellulose fibers segment.

This is a solid company, and its payout feels similarly dependable. In my opinion, the REIT should be able to at least sustain it going forward.

Weyerhaeuser's new dividend is to be handed out on September 25 to shareholders of record as of September 11.

Royal Bank of Canada (RY -0.34%)
This is, technically, our only current dividend raise coming from a foreign country. This veteran, Toronto-headquartered lender has bumped its quarterly almost 3% higher to C$0.79 ($0.60) per share.

It's the latest in a great many payouts over the years. The company, after all, was founded in 1869 and has been operating ever since. 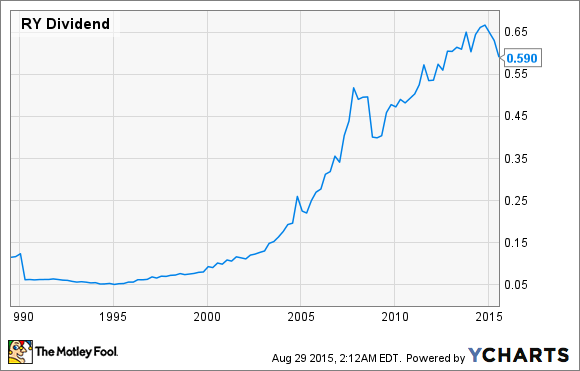 In spite of its very Canadian name, it has a presence on the American market in various financial segments including banking, insurance, and capital markets. That footprint will grow once it absorbs Los Angeles-based banking group City National, a $5.4 billion acquisition the two companies agreed to earlier this year.

As for its core operations, Royal Bank of Canada is doing well. Its Q3 net profit of nearly C$2.5 billion ($1.9 billion), 4% higher on a year-over-year basis, was fueled by the best-ever quarterly bottom line for its key personal and commercial banking segment.

Meanwhile, the bank is habitually well in the black in terms of free cash flow, throwing off more than enough to cover its dividend. I wouldn't worry about the viability of this payout.

Royal Bank of Canada's upcoming distribution will be paid on November 24 to stockholders of record as of October 26.

Westlake Chemical (WLK -1.67%)
This chemicals specialist has concocted a higher dividend for its shareholders. Last week, Westlake Chemical lifted its quarterly distribution to just over $0.18 per share, a 10% increase over its predecessor.

As the company was proud to point out, this will be the 44th consecutive dividend since its IPO in 2004. Over that time, the amount has risen steadily from just over $0.01 to the present level (adjusted for a 2014 stock split). In late 2012, the company also paid a special dividend of $3.75 per share.

Westlake Chemical can well afford the generosity. In its recently reported second quarter, it announced an all-time high net profit of just over $205 million ($1.54 per diluted share), a robust 40% higher on a year-over-year basis. That was on the back of nearly $1.2 billion in net sales, a 19% increase. 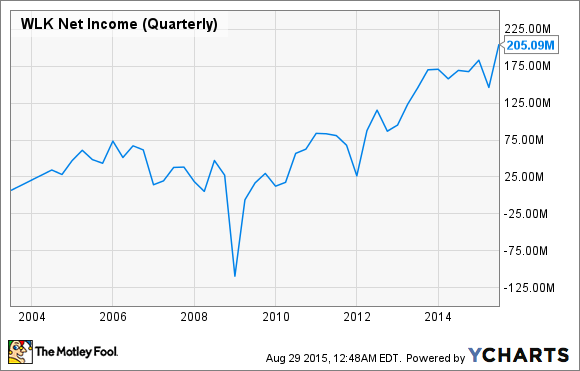 Meanwhile, free cash flow has been growing -- it topped over $600 million last year, by far its highest level in years. That's well above the amount the company pays out in dividends, so the new distribution presents little risk.

Paying stockholders is clearly a priority for Westlake Chemical. Given this tendency and the company's strong financial position, I'd bet on it raising the dividend again in the future at some point.

The new payout is to be dispensed on September 22nd to shareholders of record as of September 4th.

Eric Volkman has no position in any stocks mentioned. Nor does The Motley Fool. We Fools may not all hold the same opinions, but we all believe that considering a diverse range of insights makes us better investors. The Motley Fool has a disclosure policy.

5 Dividend Stocks to Buy in June

Why Congress Is Targeting These Dividend Favorites

4 Dividend Stocks Showing You the Money
413%