It could be smart to pick up shares in these five dividend-paying stocks this month. Shares in dividend-paying companies have a history of outperforming their non-dividend paying counterparts, but not every dividend stock belongs in an income portfolio. Some dividend-paying stocks pay a handsome yield because their businesses are struggling and their share prices have suffered. Rather than focusing solely on yield, a better bet might be to focus on quality.

We asked five of our top Motley Fool contributors what dividend stocks they think are top-shelf buys, and they came back with these picks, each of which has catalysts that could make buying them now a smart decision.

Andres Cardenal: Cisco Systems, Inc. (CSCO -0.09%) is a stable and mature tech company, and demand in key areas such as switching and routing has been quite weak over the last several years. This is putting downward pressure on sales growth; as a reference, overall revenue increased by a modest 3% year over year last quarter.

On the other hand, the company is making steady progress in its transition away from switching and routing toward a business more focused on software and subscription services. This should drive accelerating growth going forward, and it's also a major positive in terms of profitability. Cisco announced a considerable increase in gross margin last quarter, from 63.8% of sales to 64.3%. On a similar tone, adjusted operating margin was a big 30% of revenue during the period.

Cisco started paying dividends in 2011, and the company has increased payments every year since then. This includes a generous dividend hike of 24% for 2016, raising payments from $0.21 to $0.26 quarterly per share. At current prices, the stock is paying a generous dividend yield of 3.7%.

Importantly, current dividends account for less than 45% of earnings forecasts for the current fiscal year, so Cisco has considerable room to continue increasing dividends over the years ahead.

Jason Hall: Now looks like a great time to buy shares of dividend aristocrat VF Corp (VFC -0.09%). After several years of strong growth, the company's plans to accelerate revenue to $17 billion by 2017 have stalled over the past year, with revenue and profits coming in flat. VF's stock price has fallen considerably since the start of 2015, but probably more than is justified by the less-than-stellar results: 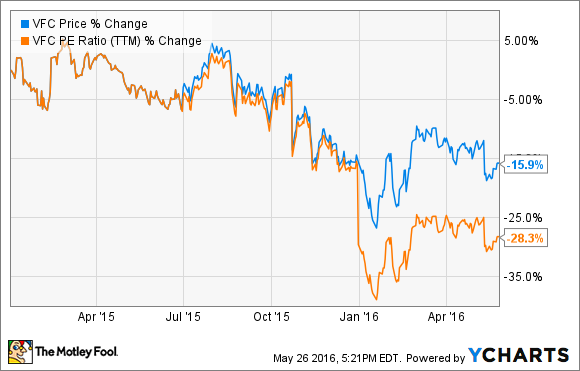 Today, shares of VF are cheaper, based on the price to earnings ratio, than they've been since 2014.

Yes, VF management does have some work to do to reignite growth, but at least some of what the company has faced is a double-whammy of a weak international economic environment and the impact of a strong U.S. dollar hurting its international profitability. While there's not much management can do to fix the global economy, the company is far from troubled, and its management team has a solid track record of allocating capital toward profitable growth.

Furthermore, the best time to buy a wonderful company with great management is when when Mister Market views it unfavorably. This appears to be the case right now with VF. Its 2.2% dividend yield may not look all that sexy today, but with a stellar track record of dividend growth, long-term investors could do very well to buy shares of VF Corp now.

Matt DiLallo: While money doesn't grow on trees, they certainly can grow your money. At least, that's if you invest in timberland REIT Weyerhaeuser (WY 2.60%), which pays a pretty generous 4% dividend. It's a payout the company has steadily grown over the past five years: 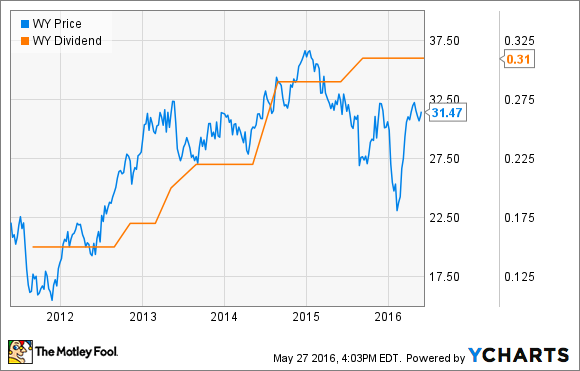 Aside from that consistent dividend growth, what makes Weyerhaeuser an interesting stock to buy right now is the fact that it's in the midst of a transition that's expected to drive stronger growth going forward. That transition kicked off when the company acquired of one of its larger peers, creating the undisputed leader in the sector, controlling more than 13 million acres of timberlands. The company expects the transaction will yield at least $100 million in cost synergies while it is also targeting an additional $200 million in operational improvements.

Those cost savings, when combined with some additional portfolio reshuffling and market improvements, could yield substantial dividend growth in the years ahead, as implied on the below slide:

Speaking of the portfolio reshuffling, Weyerhaeuser recently sealed a $2.2 billion deal to sell its cellulose fibers pulp mills while it is exploring its strategic options for both its liquids packaging and publishing paper facilities, which could also be sold. These asset sales would enable the company to complete its $2.5 billion share buyback plan, which it is undertaking to offset some of the dilution from its recent merger.

The bottom line is, Weyerhaeuser is still in the early stages of not only its transition plan, but the improving timber market. That makes now a great time to buy the stock and capture its growing dividend.

Todd Campbell: The Federal Reserve is going to raise interest rates, maybe as soon as June, and if it does, net interest margins for banks including SunTrust Banks, Inc. (STI) will head higher.

Net interest margin, or the difference between what a bank pays for its funding and the amount it charges borrowers, is the lifeblood of bank profitability. Since rates paid for funding tend to lag rates charged to borrowers, an uptick in interest rates could offer a nice boost to SunTrust's bottom line. SunTrust's management estimates that a 1% increase in benchmark interest rates would have a 3% positive impact on net interest income.

An improvement in net interest income due to a rate increase would be welcome by investors, but even if an increase doesn't happen in June, SunTrust could still reward investors with growth. Last quarter, the big-cap bank's net interest margin improved by 21 basis points, and its EPS grew 8% year over year.

SunTrust's non-performing loans total just 0.70%, and its loans to the struggling energy industry represent just 2.4% of its loans outstanding. Therefore, there's not much to dislike by investors on that front either, and that's good news for buybacks and dividend payments. In Q1, the bank bought back $175 million of its stock, and it plans to buy back another $175 million in stock this quarter. Meanwhile, the company's dividend yield is healthy at 2.18%. George Budwell: I think Gilead Sciences (GILD 0.89%) is a great dividend stock to pick up this month because the biotech appears to be gearing up for the next major phase of its life cycle. Specifically, Gilead has recently undergone several changes to its top management team that may pave the way for a big splash on the M&A front.

Over the years, Gilead has historically been a fairly active participant on the M&A scene, but the biotech's prototypical buyout target has been small, clinical-stage companies valued under $600 million. However, now that John Milligan has taken over as president and chief executive officer and the company has built a massive cash position in excess of $20 billion, history may no longer provide much insight into the company's plans going forward.

After all, Gilead's revenue stream from its megablockbuster hepatitis C drug, Harvoni, has been showing signs of weakness as of late. In the first quarter, for instance, the biotech reported that global Harvoni sales dropped by $562 million from a year ago, reflecting higher pricing discounts as well as the launch of other hep C therapies.

While the biotech's recent HIV product launches helped to offset this drop in Harvoni revenue, the fact remains that Gilead's competitive edge in the all-important hep C market is starting to slip, especially in the United States. As such, it only makes sense for the biotech to put its huge cash position to work by acquiring a bolt-on acquisition, whereby helping it return to solid double-digit growth moving forward.