Please ensure Javascript is enabled for purposes of website accessibility
Log In Help Join The Motley Fool
Free Article Join Over 1 Million Premium Members And Get More In-Depth Stock Guidance and Research
By James Brumley - May 27, 2021 at 9:42AM

Consider the calendar, the circumstances, and the sources for perspectives you're getting... and then take a step back and look at the bigger picture.

Even without giving it much thought it's easy to dismiss Cisco Systems (CSCO 1.55%) as a prospective purchase. The networking giant's guidance for the current quarter wasn't as bold as expected, and besides, isn't there a microchip shortage under way? A more broad-based bet like the Dow Jones Industrial Average (^DJI 1.27%) seems the safer trade right now.

That thinking, however, oversimplifies a more complicated situation. The noise of the chip shortage is obscuring a much bigger bullish tailwind, while the market indexes themselves may be headed into a period of weakness.

Its fiscal third quarter's results were more than fine. Cisco's revenue of $12.8 billion was up 7% year over year, topping estimates. Per-share earnings of $0.83 also beat analyst expectations of $0.82, growing 5% from the year-ago comparison of $0.79 per share.

That's the good news. The bad news? Operating profits are likely to roll in between $0.81 and $0.83 per share for the current quarter on revenue growth of 6% to 8%. The analyst community was modeling an average income of $0.85 per share. CEO Chuck Robbins concedes Cisco is indeed impacted by the chip shortage, explaining in last quarter's conference call, "notwithstanding what's going on in the supply chain, our revenue guide would have been higher, which could have probably flowed through to improving EPS as well."

Shares fell 4% in response to the outlook, and although that setback's been more than undone in the meantime, the stock's still just barely above its pre-pandemic highs while most other stocks are sitting on much bigger gains. For all intents and purposes, the tech sector's chip supply chain has been strained since December, holding many of these names down for months.

Be wary of drawing sweeping, unwavering conclusions based on nothing more than the prevailing headlines of the day, however. They may paint a misleading picture. And in this case, they probably do.

Microchips that are needed to make hardware work may be in short supply at this time. But the networking industry is finding above-average demand that just might prioritize chip and component deliveries to companies such as Cisco and smaller rivals like Ciena (CIEN 3.42%) and Juniper Networks (JNPR 0.59%). Global Market Insights, for instance, believes the data center networking market will grow at an average yearly pace of 15% through 2027. Mordor Intelligence pegs the five-year growth rate for enterprise network equipment at a notably lower 8%, although that's growth nonetheless.

To this end, Robbins made it clear that even while he expects the supply chain to remain tight through the rest of the calendar year, things will start to ease as soon as next year. And the company's already partially offsetting this near-term drag with price increases, which it's presumably able to impose due to tight supplies from its competitors. 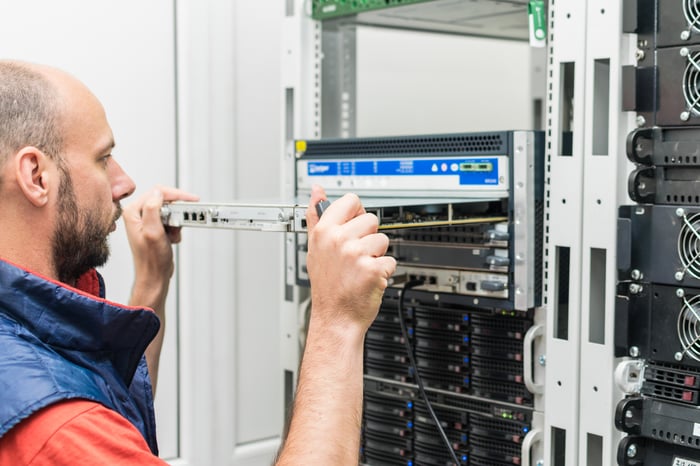 Then there's the not-so-small detail that Cisco is decreasingly reliant on hardware sales to generate revenue anyway, as it wades deeper into software waters. Services made up roughly 28% of last quarter's sales, while apps and security chipped in another 17%, making almost half of Cisco's total revenue not rooted in actual routers and switches. In this vein, Mordor anticipates the networking-as-a-service market growing at a compounded annual pace of 33% between now and 2026.

More expensive networking gear -- or even a lack of availability of the right networking hardware -- could accelerate this industry shift toward software-defined networks.

So why is everyone seemingly talking about (and perhaps embellishing) the near-term chip supply crunch while looking past the longer-term networking tailwind and nuances somewhat unique to Cisco? Because, that's how things work all too often -- negativity sells.

It's a dynamic, however, that you can ultimately use to your advantage.

Right or wrong, many investors don't do their proverbial homework, and many of the ones who do the sort of studying they're supposed to still don't act on the information they gather. Big mistake. Although it's certainly easy to move with the herd that's steered by current headlines, you're typically better off digging up your own data and coming to your own conclusions. Ironically, the more sensational the prevailing headlines may be, the more important it is to look past the groupthink they can create.

More specific to the current scenario, the crowd seems less than impressed with Cisco here, and looks like it will remain so until the chip shortage is over and companies are spending big on tech again. But waiting that long could mean investors end up waiting too long. Stocks tend to move predictively rather than reactively.

None of this is to suggest a well-diversified fund of blue chips like the SPDR Dow Jones Industrial Average ETF (DIA 1.24%) is a downright terrible investment, of course. On a risk-versus-reward basis, though, the usually slow summertime is more likely to reward a surprisingly solid individual stock story than it is to meaningfully lift the whole market. You may as well give yourself that edge, even if it's going to be a temporary one.