Agenus was a favorite name among institutional investors in the second-quarter. Should you follow in their footsteps and add this speculative biotech to your portfolio?

The clinical-stage immunology company Agenus (AGEN 7.79%) saw a huge surge in institutional buying during the second-quarter of 2015, according to the latest round of 13Fs. Specifically, the small-cap biotech's institutional holdings increased by approximately 67% over the three month period, making it one of the top targets of Wall Street's affection in the last quarter.

Perhaps as a direct result of this heavy institutional interest, Agenus' shares also bolted higher in the second-quarter: 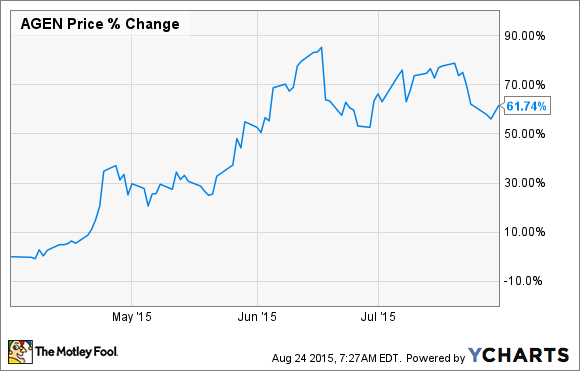 While the stock's institutional ownership still sits below 50% per the latest numbers and it's been having a rough third-quarter price-wise, I think this recent major shift in ownership warrants a deeper look. With this in mind, let's dive into what may have triggered this spike in institutional buying, and consider if the stock is worth adding to our portfolios right now.

Agenus is a rapidly evolving immunotherapy company
The Street's sudden interest in Agenus isn't much of a mystery. The company's emerging immuno-oncology program -- jump started by its acquisition of 4-Antibody in February of 2014 -- has grabbed the attention of major pharmas like Incyte Corp. and Merck in the form of lucrative research partnerships, and transformed the tiny biotech into an industry leader in terms of its ability to identify promising antibody targets via its Retrocyte Display platform. Agenus also sports a handful of ready-made checkpoint proteins, such as GITR, OX40, LAG-3 and TIM-3, that are being co-developed with Incyte as potential immuno-oncology products.

Why is Wall Street enamored with immuno-oncology? In short, this novel approach to fighting cancer is projected to grow into a $35 billion market by 2020, and perhaps become the dominant form of treatment within the next decade. Backing up this optimistic estimate, Bristol-Myers Squibb and Merck's PD-1 inhibitors, Opdivo and Keytruda, respectively, have already gotten off to a stunning start on both the regulatory and commercial fronts. These two drugs combined for a whopping $232 million in sales in the second-quarter, despite only being recently launched. Put simply, oncologists appear to be extremely interested in this new cancer-fighting technology.

Is Agenus worth the risk?
Agenus is an interesting pick because it actually has more to offer than experimental-stage check point inhibitors. Specifically, Agenus has two additional therapeutic platforms in its heat-shock protein vaccine program, which is showing promise in newly diagnosed glioblastoma multiforme (an aggressive form of brain cancer), and its Saponin-based adjuvants for the late-stage vaccine candidates in malaria and shingles, which are being developed by GlaxoSmithKline: 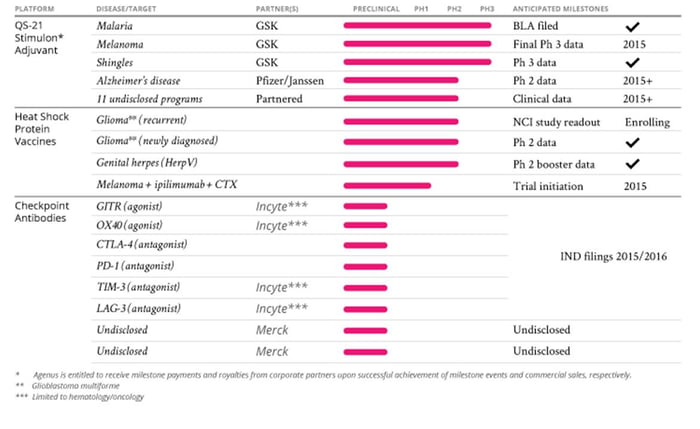 So while Agenus may lack a clear cut "flagship" product candidate at this stage, it does offer investors a couple of paths toward value creation going forward. And that's why I share the Street's sentiment on Agenus. Put plainly, the company's most advanced un-partnered candidate in its glioblastoma vaccine could fail in its planned late-stage study and the company would still have a lot to offer value-wise. That's not a common feature among small-cap biotechs, which typically pour almost everything they have into a single late-stage candidate.

All told, Agenus looks primed to move higher in the months and years ahead, fueled mainly by its headfirst entry into the immuno-oncology space. As such, you may want to consider picking up some shares of this speculative small-cap biotech.