If you're not completely sure what a pension is, here's everything you need to know.

What is a pension? Simple question and a slightly more complex answer than you may think. When most people think about pensions, they imagine someone who spent 30 years working at the factory, then getting a gold watch and a monthly check when he or she retires. And while that may be true for some people (except for the gold watch nowadays), pension benefits are a little more than that.

As a matter of fact, plenty of people who receive pensions will only get a small benefit and it may come from a company the worker left years and years ago. Let's take a closer look at pensions, what they are, and how the benefits work. 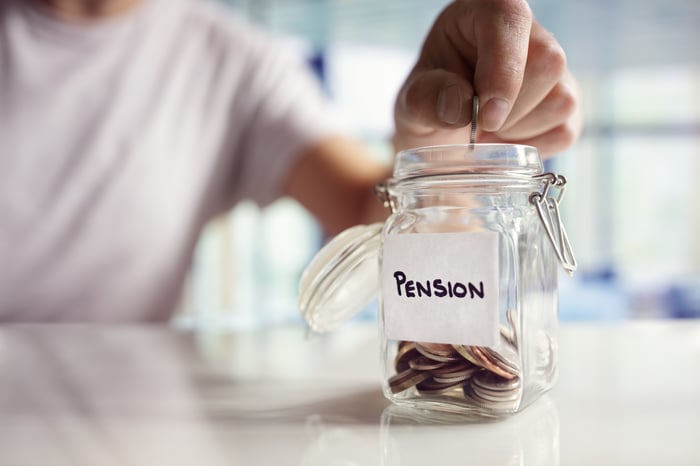 The pension defined
A pension is a kind of defined benefit plan where a worker gets exactly that: a defined benefit. In the case of a pension, when said worker meets specific qualifications, such as time on the job, the person will be eligible to receive pension benefits when he or she retires.

Pensions are fully managed by employers, with no employee involvement in picking investments or managing funds. Typically, your benefit will be based on how long you worked for the organization and your pay -- often the last year or last few years' average pay. In other words, the longer you work for that particular organization, the more you'll typically get when you do retire.

When you retire, your pension will be paid out of a pension fund, not off the company's payroll. Companies with pensions must set up and regularly contribute to a pension fund in order to meet their obligations to retirees. Some larger organizations handle much of the administration of their pensions in-house, but may rely on investment companies to actually manage and invest the pension funds, while smaller ones may use a third party to handle the whole operation.

What jobs have pensions?
Historically, many unionized workforces have had pensions, including manufacturing, public sector, educators, and skilled trades. These benefits are often hard-fought and central parts of labor contracts, but over the past decade-plus, the pension has become less and less common in the private sector. They remain a key benefit for many public sector jobs like public education, police, fire, as well as many federal, state, and local administrative jobs.

Can I take my pension with me?
Yes and no. If you are "vested" in your current employer's pension plan but leave for another job before retirement, your pension benefits typically will "freeze," meaning whatever level of benefit you qualify for today will kick in when you eventually do retire. In other words, you don't lose your benefit, but you can't take it to another company as it stays with the pension fund.

In some rare cases, you may be eligible for a very small benefit and the pension fund may be legally allowed to pay you a lump sum. But beyond that, it's very rare that you'd actually be able to take any of the funds from the pension fund.

There is a kind of defined benefit plan called a "cash balance plan" in which your employer deposits a specific amount of money each year into the fund in your name, typically with a guaranteed rate of return earned. Some employers with these kinds of plans will allow former employees to roll over the balance into an IRA. Again, the key difference here is that you have an assigned cash value versus a guaranteed payout in retirement with a pension.

If I have a pension, do I need another retirement plan?
Often, the answer is, "yes," but it really depends on whether or not the benefit you'll receive, combined with things like Social Security, will meet your income needs in retirement. You also should consider dependents like your spouse and whether he or she would get any benefit if you were to die first. If someone else is depending on that income, you'll want to be sure the person is taken care of.

If you're concerned you'll have a shortfall in retirement, a Roth or Traditional IRA may be a good way to build up a nest egg of extra income. You can put aside $5,500 per year ($6,500 if you're 50 or above), and when you take distributions in retirement, they're completely tax-free.