Please ensure Javascript is enabled for purposes of website accessibility
Log In Help Join The Motley Fool
Free Article Join Over 1 Million Premium Members And Get More In-Depth Stock Guidance and Research
By Andrew Tonner - Sep 3, 2015 at 8:25AM

With Apple's invitations for its highly anticipated iPhone 6s launch event finally out, we look at the products and rumors likely to make the cut in the company's next-gen smartphone.

It's that time of year again.

As we tear away the calendar page, we inch ever closer to Apple's (AAPL -2.81%) much-anticipated fall product launch cycle. And for those hiding under a rock, Apple has officially released the invites for its upcoming iPhone 6s launch event, which will be held -- predictably -- on Tuesday, Sept. 9, at 10 a.m. PST.

So what should you expect from the new iPhone 6s and 6s Plus? Let's quickly review.

What's likely
Apple product rumors typically come in two distinct varieties: the likely and the far-fetched. And with this year's iPhone lineup, a few new features can be found in each of these camps.

For months now, reports have circulated that Apple plans to expand its Force Touch technology to at least some of this year's iPhone and iPad lineup. Apple first debuted Force Touch as a means of overcoming the small screen and lack of a keyboard in the Apple Watch, allowing a user's touch to drive a number of different outcomes with a single tap to the Watch's screen depending on the degree of pressure he or she applies. Apple also incorporated the technology into the updated trackpad in its next-gen MacBook lineup this year. Now, the prospect of Force Touch appearing across the most recent updates to Apple's entire product lineup only strengthens the bull thesis for touchscreen controller supplier Analog Devices. And while Force Touch makes complete sense in a computing medium as minute as the Apple Watch, would this improvement be meaningful enough to truly differentiate the iPhone 6s and 6s Plus from the iPhone 6 and 6 Plus? I have my doubts.

Additionally, Apple will assuredly incorporate an updated A9 processor, possibly bringing with it a 20%-30% performance  increase over its predecessor by some estimates. Rumor has it that on-again, off-again Apple chip fabrication partner Taiwan Semiconductor won the bulk of Apple's chip business this year on its 16-nanometer process. However, we'll have to wait for the device teardowns several months away to confirm whether Apple was able to cut Korean smartphone nemesis Samsung from its chip business entirely.

The first is the possibility that Apple will add a rose-gold color option to this year's iPhone lineup. It added the first gold option for the iPhone with the iPhone 5s  two years ago, a move many interpreted as an appeal to emerging market consumers primarily in China and India, where the material carries a special cultural status. Apple began using rose gold as a material in its high-end Apple Watch edition earlier this year, and perhaps its appeal there has helped further its use of the shade among other areas of its product portfolio.

Moving on, several purported supply chain leaks have given credence to the notion that Apple also plans to upgrade both the front- and rear-facing cameras in the iPhone 6s and 6s Plus. Sources claim an advanced Sony camera with RGBW "subpixel" capability, which should help improve performance in low light situations, will power the rear-side camera. Many expect the front-facing camera to feature a camera sensor capable of streaming videos in 1080p HD, a feature ideally suited for Apple's FaceTime video calling app.

There's also a strong likelihood Apple will include either a refresh of another new product like the much-rumored update to its Apple TV or the iPad Pro, although the latter seems a bit incongruous with a likely iPad event in October. An improved version of Siri has also been rumored, per the possible hint in the invitation graphic above. Apple could also include additional information about other products like the Apple Watch and its upcoming watchOS 2 software update.

But will the iPhone 6s move the needle?
Current estimates call for Apple iPhone shipments to hover somewhere around 50 million in the quarter. A recent sell-side note from UBS estimates 49 million iPhone shipments for Apple's fiscal-year fourth-quarter 2015, although its historic fourth-quarter performances suggest shipment volume north of 51 million iPhones sold. Most critically, either number would still represent significant year-over-year shipment growth for Apple coming at a time when concerns over the longevity of its current iPhone "super cycle" have weighed on its stock price. 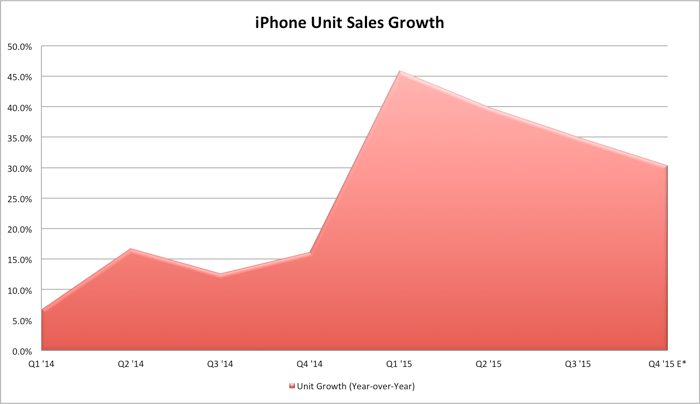 However, there's certainly room for optimism. The same UBS report mentioned above estimated that as much as 73% of the iPhone's installed base has yet to purchase an iPhone 6, leaving plenty of pent-up demand in the market place to make the iPhone 6s a likely success.

Critically, it also bears reiterating that the above remain rumors. However, given the enormity of Apple's global supply chain, investors and analysts have been able to gain at least decent visibility into upcoming changes in the tech giant's product pipeline. Thankfully, we're only days away at this point from seeing whether Apple can differentiate the iPhone 6s enough to make this yet another memorable product in Apple's rich tradition of smartphone leadership.