What: Shares of Keryx Biopharmaceuticals (NASDAQ: KERX), a drug developer with a focus on treating renal disease, managed to fall more than 13% today with heavy trading volume on an otherwise muted day for the markets.

So what: Shares appear to be crashing today in large part because of downbeat analyst coverage, as Citi recently initiated coverage on Keryx today and rated the shares as a Sell. They even went so far as to put a target price of $1.50 on the stock, which is still far below where shares are currently trading even after factoring in todays falling price.

Analysts at large have been turning bearish on the company's stock since the start of the year, as a slew of them have lowered their price targets for the firm as sales of the company's only approved drug, Auryxia, have been slower out of the gate than many of them were expecting.

Now what: Keryx stock can't seem to get any mojo going, as earlier this summer the company's stock even managed to fall during a day that the company actually released good news.

Wall Street certainly hasn't made it easy to be long on this stock so far this year either, as a huge increase in the company's short interest has put huge selling pressure on the stock, which is now down 63% since the start of the year. 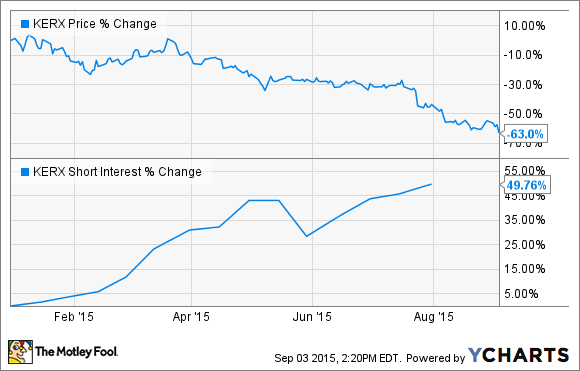 Bears have been correct on the stock so far this year, and there are certainly several reasons to believe that the company's shares will continue to decline.

While there are still reasons to believe that Keryx may have a bright future, the company's investors haven't been impressed with what they've seen since Auryxia launched and have been heading for the exits. However, I still think there are reasons to be optimistic, but I'm content to keep my money on the sidelines until we see more data about how well Auryxia is truly being received by providers, payers, and patients.