Facebook's (NASDAQ:FB) $250 billion market capitalization is based on some very optimistic forward-looking assumptions.

It makes sense, of course, for the social network to trade at a significant premium to earnings, given its impressive growth since it has gone public -- Facebook's trailing-12-month revenue is up 188% from 2012 revenue. And growth continues to be strong even in recent quarters, with second-quarter revenue up 39% from the year-ago quarter. Net income has also soared since the company initially went public, nearly tripling from pre-IPO levels and reaching $2.7 billion in the trailing 12 months.

But to justify this incredible market capitalization, Facebook is going to need more than growth; it needs sustainability.

The argument for Facebook's staying power has always been its network effect. The more users on Facebook, the more effective its network and the more difficult it is for users to leave the network and find a compelling alternative elsewhere, proponents argue. So far, and thankfully for investors, this reasoning is panning out to look legitimate.

And today, Facebook's network is more powerful than ever, with no similar social network coming even close to challenging it.

Here are five figures to drive home just how significant Facebook is today:

1.49 billion monthly active users. Yes, that's billion. More than one in seven people in the entire world uses Facebook at least once a month.

844 million mobile daily active users. Facebook's most valuable users are those who use the service every day -- especially those daily users who access the service on mobile devices, where ads are more effective. Fortunately for Facebook, the majority of its users fall into this category -- 64.4% of them, to be exact. 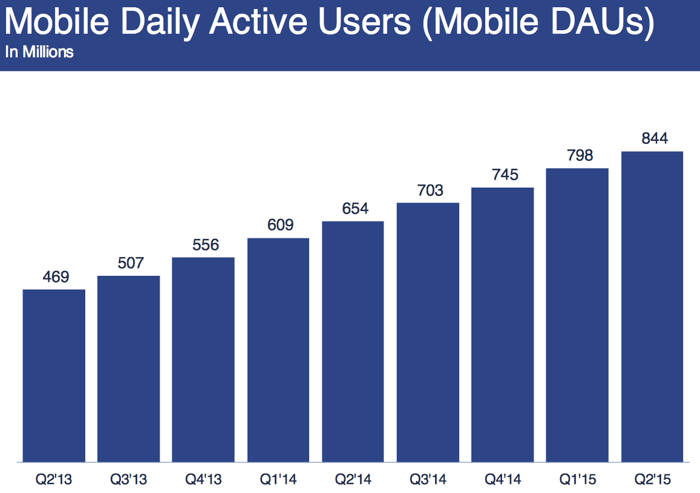 Even more, Facebook's mobile daily active users are growing rapidly. Its second-quarter count of 844 million is up 29% from the year-ago quarter and 6% sequentially.

46 minutes. Between Facebook, Messenger, and Instagram, people are now spending more than 46 minutes every day on social networks. And this metric doesn't even include Facebook's WhatsApp, which would almost certainly push this average higher.

Of course, Facebook's impressive reach doesn't automatically make the stock a buy, but it at least helps investors understand why the market is so optimistic about it.

Not only is the stock priced for growth, but it's priced for sustainable growth. With a substantial network of users and a track record of CEO Mark Zuckerberg's excellent business execution, continued growth for Facebook is likely to translate into tens of billions of dollars of incremental net income over the long haul.