When smart hedge fund managers begin buying into a lesser-known stock, that's probably an investment opportunity worth a closer look. This small bank stock is certainly that, though I'm not convinced the risk of an investment today is worth the possible future reward.

A small bank with big problems.
OFG Bancorp (OFG -2.63%) is a pretty traditional banking operation. OFG operates as an old-fashioned community bank in Puerto Rico, offering deposit, loan, and value-added financial services to its customer base on the island.

The problem for the bank is the Puerto Rican economy itself. Banks on the island have had a very tough run of late, driven by a collapsed real estate market, consistently high unemployment, and a very serious fiscal shortfall at the government level.

It's a tough situation that the bank has thus far been unable to overcome, posting a $6.6 million loss for the second quarter alone. The bank is also fighting a serious problem loan issue; 10.4% of the bank's loans are currently over 90 days past due. That level is over 10 times higher than the industry average.

Consector Capital, another financial specialist run by manager William Black, was a net buyer of the stock in the second quarter, increasing its previous position 7% to 548,000 shares. Consector has maintained the stock as a percentage of its investment portfolio between 4.3% and 4.5% since it first bought shares in March of last year.

Tudor Investment Group, the fund operated by famous manager Paul Tudor Jones, owns 52,000 shares in the bank, as well as other funds including Seawolf Capital and others. As far as small-cap bank stocks go, OFG is a popular stock in the hedge fund world.

Despite the hedge fund buying, the bank's stock has been crushed so far this year. 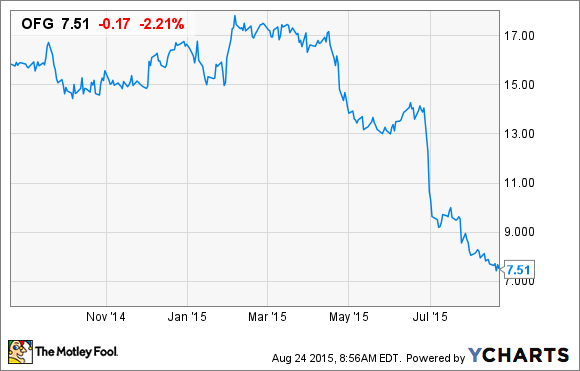 A lot of the problem is driven by broader economic problems that the bank alone cannot fix. The Puerto Rican market is just really tough these days.

Two of the bank's largest problem loans were debts extended to government agencies, the Puerto Rico Electric Power Authority and the Puerto Rico Aqueduct and Sewer Authority. It's a sad state of affairs when the electric and sewer agencies are running over 90 days past due on its debts.

José Rafael Fernández, the bank's CEO, said: "Looking ahead, prevailing economic conditions in Puerto Rico are challenging and uncertain. Our strategy is to be vigilant in managing our risk exposure and the factors under our control. We urge the Central Government to act quickly and in cooperation with the investment community to restart the Puerto Rico economy, which has now been stalled for nearly a decade"

The bank is doing the right things, but challenges remain
While the bank cannot control the economic and government policy issues across the island, it can take proactive steps to find ways to make new, high-quality loans going forward. There is evidence that indicates this may already be happening.

New loans were up 19.7% quarter over quarter, driven by a 52% jump in consumer loans and a 40% jump in commercial loans. The delinquency rate in the loan portfolio along with other credit quality metrics have improved for three consecutive quarters now, although they remain quite elevated as mentioned above.

The bank is opening new branches, rolling out new marketing campaigns, and doing its best put to bed the problems that have beleaguered its path for years now.

But don't be fooled: This bank still has major problems. It's problem loan levels are extremely high and the Puerto Rican economy poses a major headwind for any turnaround. Hedge funds with strong risk appetites may be piling in, but I think this bank stock remains a bit too risky for most retail investors.