Is the burger chain's plunge meaningful or just another movement?

What: Shares of Shake Shack (SHAK 4.74%) ultimately fell 26.6% in August, according to S&P Capital IQ data, thanks to lower-than-expected pricing of a secondary offering from the burger chain.

On one hand, shares of Shake Shack are still up nearly 130% following a massive pop after its initial public offering at $21 per share this past February. On the other hand, though the stock continued its rise and peaked just below $97 per share in May, it has since more than given up those gains and trades "only" 5% above its first-day closing price as of this writing: 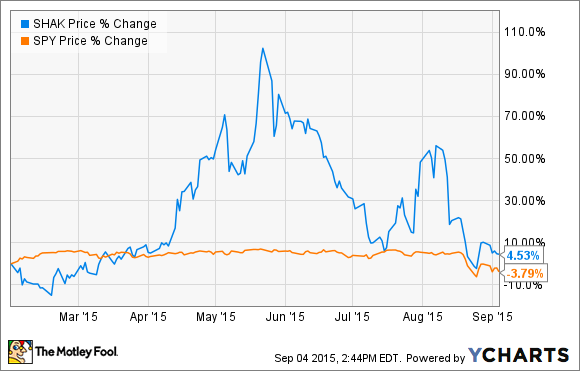 So what: Specifically, Shake Shack priced a secondary offering of 4,000,000 shares of Class A common stock at a price of $60 per share, a significant discount to the stock's previous-day closing price of $64.79 per share. Shake Shack also stated it wouldn't receive proceeds from the sale by selling stockholders, which indicated the secondary's purpose was to allow insiders to sell shares previously tied up as part of post-IPO restrictions -- not exactly a big vote of confidence for a stock many investors already viewed as overpriced.

Now what: Ironically, Shake Shack's secondary completely overshadowed what otherwise would have been viewed as stellar second-quarter results. To be sure, quarterly revenue climbed 74.7% year over year to $48.5 million, helped both by new locations and a 12.9% increase in comparable-store sales (or "same-Shack sales" as the company calls them). Meanwhile, adjusted pro forma net income more than tripled over the same period to $3.4 million.

Shake Shack also told investors it plans to open at least 12 new company-owned locations each year for the foreseeable future. For perspective on that growth, Shake Shack currently owns only 37 of its total 71 locations, with the remainder comprised of five domestic and 29 international franchised locations.

Of course, it didn't help that the broader market also pulled back sharply in recent weeks, dragging richly valued stocks like Shake Shack -- which still trades around 160 times next year's expected earnings -- down with it. As it stands, I'm content watching Shake Shack from the sidelines for at least another quarter as the dust settles and it regains investor confidence. But given the recent pullback and as the chain continues growing into its lofty valuation, I wouldn't be the least bit surprised if investors willing to take advantage of this weakness are handsomely rewarded over the long run.