Please ensure Javascript is enabled for purposes of website accessibility
Log In Help Join The Motley Fool
Free Article Join Over 1 Million Premium Members And Get More In-Depth Stock Guidance and Research
By Steve Symington - Sep 4, 2015 at 9:00AM

Is Smith & Wesson's pop meaningful? Or just another movement?

What: Shares of Smith & Wesson Holding Corp (SWBI 1.48%) shot up 11.5% in August, according to S&P Capital IQ data, driven almost entirely by the gun maker's strong second-quarter results. As it stands, Smith & Wesson has climbed almost 94% year to date, crushing the S&P 500's modest decline during the same period: 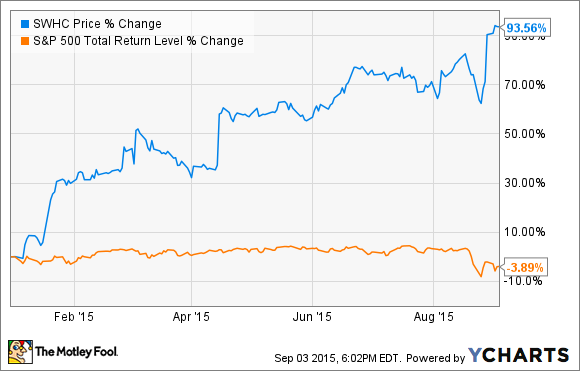 So what: Smith & Wesson started the year with a bang in January when it raised full fiscal-year guidance, vaguely citing "positive trends in the primary indicators it uses to assess its business and the consumer firearm market." Sure enough, it popped again in March after its subsequent quarterly report came in above expectations. To borrow the words of CEO James Debney, those results reflected "the successful navigation of a normalizing firearm market following an earlier consumer surge in firearm purchases" -- something I had ironically argued to be the case only a few months earlier given Smith & Wesson's focus on retaining market share.

The good news only continued from there, as Smith & Wesson stock began another upward trend in April after it raised guidance, once again, on stronger-than-anticipated orders during its fiscal fourth quarter. Then in June, the company's board voted to authorize a new $50 million stock repurchase program, none of which had been used as of its most recent quarterly report.

Now what: Revenue during Smith & Wesson's most-recent quarter climbed 12.1% year over year, to $147.8 million, resulting in 18.5% growth in net income per share, to $0.32. Both figures caught analysts off guard, as consensus estimates called for revenue and earnings of just $142.8 million and $0.22 per share, respectively.

This broad strength led Smith & Wesson to raise guidance, yet again, this time revising expectations to include fiscal 2016 revenue of $610 million to $620 million, with adjusted net income of $1.14 to $1.19 per share. Given its history of outperformance, however, it should come as no surprise that analysts' models currently call for fiscal 2016 revenue above the high-end of that range, at $622 million, and earnings slightly above the midpoint of guidance, at $1.17 per share.

Whether Smith & Wesson can live up to those expectations remains to be seen; but if one thing is sure, it's that, with shares still trading at a reasonable 13.7 times next year's expected earnings, Smith & Wesson shareholders should be happy with the year they've had so far.