Is Wingstop's drop meaningful or just another movement?

What: Shares of Wingstop (WING -1.98%) fell 20.2% in August, according to S&P Capital IQ data, despite a largely solid quarterly report early in the month.

Specifically, in its first report since going public in June, Wingstop's fiscal second-quarter revenue rose 18% year over year to $19.2 million, helped by a 9% increase in domestic same-store sales and a 19.5% increase in its systemwide restaurant count to 785. With the former, Wingstop remains poised to deliver its 12th consecutive year of domestic same-store sales growth in 2015. And the latter included 40 net franchised restaurant openings during the quarter, leaving it on track to open a net 120 to 130 new franchised locations for the year. Meanwhile, adjusted net income rose 19.6% to $3.2 million, while adjusted earnings per pro forma diluted share climbed 10% to $0.11.

So what: To be fair, the stock is still up more than 40% since a massive pop the day of its initial public offering at $19 per share in June. But since then, Wingstop investors have endured significant volatility typical of small-cap companies shortly after their IPO, and shares have fallen around 12.5%.

That said, investors can take solace knowing the latest declines have largely mirrored the broader market, with the S&P 500 down around 8.5% over the same period: 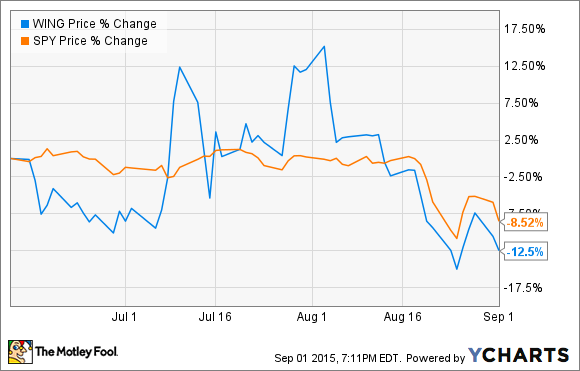 Now what: Personally -- and however promising the business -- this is why I prefer to watch newly IPOd companies from the sidelines for at least a quarter or two until the dust settles. As I indicated late last year leading up to Wingstop's IPO, however, the company's vision to build itself into a chain of up to 2,500 domestic restaurants is simply too mouthwatering for growth-hungry investors to ignore. For now, I'd like Wingstop to get a few more months under its belt as a public company. But in the meantime, you can be sure I'll be watching it closely for consideration as a worthy long-term investment.